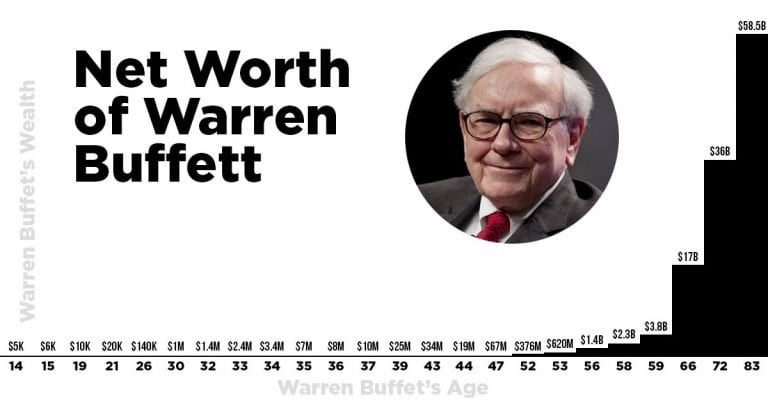 Einstein and Yoda both teach the Power of the Force. The Force in Star Wars is a fantasy Force, “an energy field created by all living things. It surrounds us, penetrates us, and binds the galaxy together.” So said Obi-Wan Kenobi, in the original Star Wars: A New Hope.

The Force that Einstein teaches is no fantasy. It’s the Force of Compound Interest and here’s the quote widely attributed to Einstein on the subject:

“Compound interest is the most powerful Force in the Universe. The Eighth Wonder of the World. He who understands it, earns it. He who doesn’t pays it.”

That’s the same graph that occurs if you double, i.e. compound, a penny every day for a month. Doubling a penny every day for a month is the best exposition of the Force of Compound Interest I’ve ever seen, because anyone can understand it, even if they can’t believe it at first. Every investor should know that on day 31 those pennies power up to the breathtaking sum of $10,737,418.23. But not every investor does. 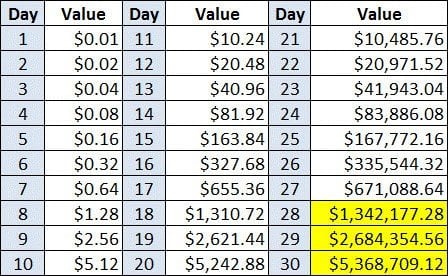 That’s because it’s not intuitive. It is not part of our everyday common sense. It’s uncommon sense and that is what guided Warren Buffett and Charlie Munger to become very rich as they matured. If the numbers simply are not intuitive for you just remember that like the Millennium Falcon of Star Wars the Force of compound interest enters hyperspace after a long, slow climb.

Now no one is going to double your penny every day for a month. But the US stock market grows by an average of 10% per year. You can earn that 10% if you’re patient enough to wait out the bad years and not sell out in a crash like you’re running from a fire. (A stock market crash is not a fire, it’s a fire sale! But most investors don’t seem to know it.) Just invest the equivalent of $5 per day--$1825 each year—and compound for fifty years in a nontaxable retirement account at 10% and what do you get? Only $2,550,784.68!

Now that’s well worth waiting for but you need a long time horizon to get there. But isn’t it worth the wait? Even poor people can invest $5 per day.

Many do, in the State Lottery. That’s hardly an investment. It does not even rise to the level of speculation. It’s the thrill of gambling, which nature has programmed us to enjoy, even as we lose again and again, forever remaking that same bad bet and getting that same cheap thrill. Though it’s not so cheap when you add it up.

Charlie Munger teaches us to “get rich slowly” and enjoy the wait. Someone else will always be getting richer faster than you and that’s just fine with Charlie Munger. Much of getting rich quick is just getting lucky, like lottery winners, the lucky dogs everyone envies. And lottery players are much like a hungry dog pack, racing around after a solitary treat and ending up starving.

Charlie Munger cautions us never to let envy guide our lives or our investments. And everybody envies lottery winners. Not only can envy cause you to gamble--people take poorer odds when they get more desperate to win-- it’s the only sin that isn’t any fun!

The great Jack Bogle, founder of Vanguard, created low cost index funds so the ordinary investor could enjoy that 10% market yield over a lifetime of compounding. The greatest investor of all time, Warren Buffett, steadfastly recommends those index funds to investors, large and small. His brilliant partner, Charlie Munger, submits that but for a rare investor of consummate skill, perhaps a few percent of those in the game full-time, can beat the index funds compounded over an investors lifetime.

In a recent talk at the Daily Journal annual meeting Charlie Munger noted that he was not sure he could. Index funds beat most managed funds and even beat most hedge funds, as Warren Buffett proved in his historic bet: hedge funds vs S&P 500 index funds over the span of ten years. The result at year nine:

You don’t need an Einstein to choose between those numbers! But you do need Einstein on the Force of Compound Interest to grow and keep your wealth.

Mark Tobak, MD, is a general adult psychiatrist in private practice. He is the former chief of inpatient geriatric psychiatry and now an attending physician at St. Vincent’s Hospital in Harrison, NY. He graduated the University at Buffalo School of Medicine and Columbia University School of General Studies. Dr. Tobak also has a law degree from Fordham University School of Law and was admitted to the NY State Bar. His work appears in the American Journal of Psychiatry, Psychiatric Times, and American Journal of Medicine and Pathology. He is the author of Anyone Can Be Rich! A Psychiatrist Provides the Mental Tools to Build Your Wealth, which received high praise from Warren Buffett. Learn more at https://www.marktobakmd.org/.