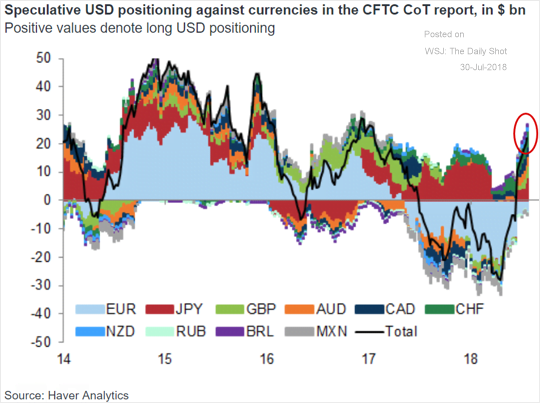 The big economic news for last week came out on Friday as Q2 US Real GDP posted a decent 4.1%, estimates were as high as 4.4% but let’s not lose sight of the fact that we haven’t had a plus 4% print in nearly 4 years. This news wasn’t enough to help the NASDAQ which, and as we have warned about sector rotation, has seemingly stung the tech sector. The NASDAQ lost nearly 1% on the week while the Dow gained 1.5%. The sector arbs seemed to dominate flows here as the NASDAQ has seen selling while the other indexes as a whole have seemed to benefit. Anyway, here is a quarterly chart of US Real GDP: 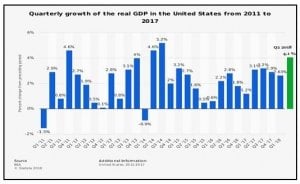 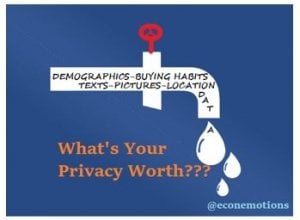 So, let’s begin by talking about Facebook. We have been hard on them ever since the Zuck went in front of congress and told us all that they don’t sell data without consent. We posted this picture on the right in our July 2nd update. Facebook reported EPS of $1.74 on a 42% increase in revenue to $13.23 billion, slightly below analyst estimates. The stock was absolutely obliterated on Thursday, as shares fell 19% to $176.26 and evaporating $119 billion in market cap and reducing the Zuck’s share of value by $16 billion. Facebook warned about slower than expected revenue growth. We don’t know how this would have taken anyone by surprise, given the nature of their congressional testimony and future potential lawsuits in the pipeline. If the Cambridge Analytica debacle didn’t scare people, then you deserved to be taken out to the woodshed. Then again, we feel many investors experience cognitive dissonance when it comes to these markets. The never can fail mentality induced via a constant IV drip of global central bank largesse.

Earlier in the week Alphabet Inc reported EPS of $11.75 (excluding the EU $5 billion charge) which beat the estimate of $9.66. Revenues rose 25% to $26.24 billion. Google controls 31% of the global ad market according to eMarketer. (WSJ) The stock rose to an all time high of $1285.84. Google gapped up but is now closing that earnings gap fast. 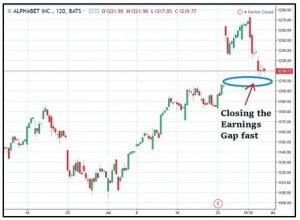 Also, out last week was Amazon which posted revenue of $52.9 billion and EPS of $5.07. They posted a record $2.5 billion Q2 profit, which marks 13 quarters in a row! The stock jumped in after-hours trading to $1880 but that didn’t last long as investors used the run up to exit. 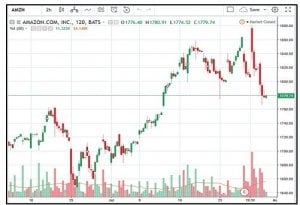 So, let’s get to other market news, Twitter reported that monthly active user’s growth has slowed and forecasted Q3 EBITDA to fall to $235 million down over 10% from Q2 results. Twitter was throttled down over 15%, closing today at $31.38 down 34% from its 2018 high.

We thought it was interesting TPG is now looking to float Cushman Wakefield in an IPO. Could this be offering us another look at a possible top in the residential and commercial real estate market? We can’t help but notice even in our own town, how many for sale signs are up. Perhaps the combination of higher interest rates and eliminating some of the tax deductions has finally taken its toll. We can’t blame them for wanting to realize some profits, especially with JLL and some others in the group doing so well. Just a side note, home sales continue to decline on an annual basis down 2.2% from last June.

Our final equity plug goes to LVMH, a company we wrote about a few letters back, when we compared the 2-tired economy of elite’s vs commoners. Anyway, they reported record revenues of $25.5 billion up 10% yoy. Great news for the world’s largest luxury goods company by sales. (WSJ) Well at least we know how they continue to prop up their demand curve, by burning unsold bags, a fashion secret no more! Hey that creates more jobs, doesn’t it?

The ECB was out Thursday reaffirming their gradual path of normalization, whatever that is these days. They still have a negative deposit rate and are still in QE mode of $35 billion a month. We suppose with the Suisse still holding a negative .75% deposit rate, the ECB looks like a bargain! We can’t help but think if the tech stocks start to truly fall, how bad the SNB will get hit, their shares are already down 30% off their highs…yes, the central bank is tradeable, suppose they are guaranteed a profit because they are paid to hold capital, what a gig right?

We read that CALPERS is lowering their discount rates on their pensions to 7%. We know this is a disaster for their actuaries and future liabilities, yet we wonder how this will be achieved with negative rates abroad and a 10yr rate that is some 40% lower. We can’t help but think kicking the can eventually fails, but we know the truth, its always someone else’s problem.

We heard some complaints this week about the liquidity in the bond market and that bond trading is getting harder. Well its all perspective right?  Rule 42.10 doesn’t help, in fact it adds to the illiquidity as it makes the barrier for entry out of the realm of possibility for virtually every speculator out there in terms of trading US treasury cash instruments. Less players, easier to manipulate we suppose, toss in an unfair market place predicated by HFT phantom order players utilizing latency arbs and well, you have a market that nobody trusts. Without speculators other than binary HFT, you have no liquidity, period.

In other political news, the EU caved to Trumps tariffs and decided to strike a deal. Trump also put out this week a package of some $12 billion for emergency farm aid, for those feeling the effects of recent retaliatory tariffs. North Korea authorized the release of US Soldier remains and will be returning home.

Let’s get to the technical aspects of the markets we follow. Starting off with the equity index futures in a comparative chart of the NQ and ES displaying some sector rotation (all charts provided by Keystone Charts Inc): 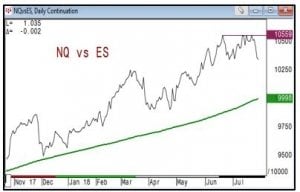 The next chart is the Russel which has broken a solid six-month trendline: 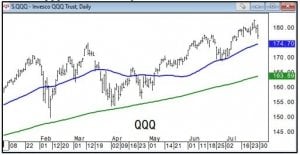 The DJ Transports doesn’t bode well for the overall tone of the markets: 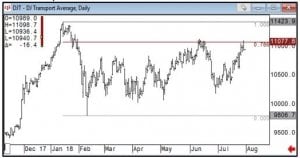 As far as AMZN, NFLX & MSFT holding up the markets, well they too are faltering: 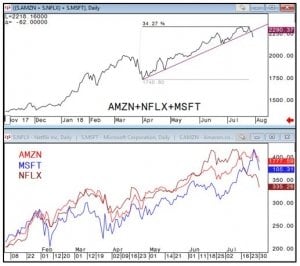 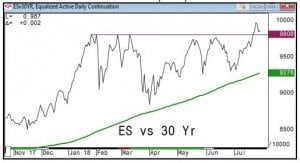 Speaking of bonds, the US 30yr yields continue to coil and we would get further directional confirmation either above 3.25% or back down below 2.98%: 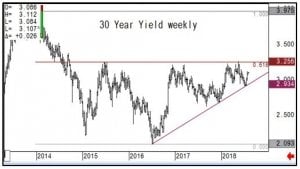 We can’t help but think USDYEN looks vulnerable here and a break imminent: 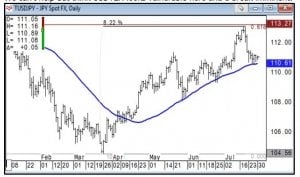 We hate to even think it, but gold is acting just like it did prior to the 2008 meltdown when Gold lost 25% from Feb to Oct.  A similar move now would bring gold down to around the $1060/1080 level, so we aren’t the least bit surprised at this move here. Although short term large levels exist around $1200 and only a break of that would open the doors toward 2015 lows: 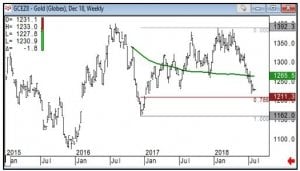 We hate to speculate that Crude Oil has become a safe haven of sorts, but it sure has acted like one as it continues to be the star performer of the year, up $1.44 today to $70.13: 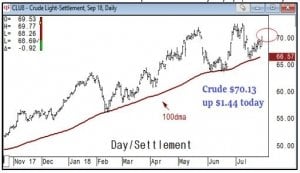 Even NatGas has been trying to carve a bottom: 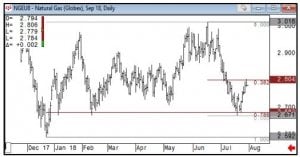 Ok that’s it for the traditional markets, let’s move to the crypto currency land, where this week, the SEC voted down the Winklevoss twins second attempt at approving their ETF product. We know the real reason why the SEC is afraid, we know the amount of money that would be poured into it, so buying time is all they are doing. The SEC is afraid of manipulation, which was one of their rationale’s. This is interesting as they allow 2x, 3x levered inverse mutual funds based upon a theoretical mathematical construct like the VIX. Who are they kidding. Although it was good to know that SEC commissioner Hester Peirce did express her disappointment with the decision to reject the application, she went on to say in a personal statement, “Apparently, bitcoin is not ripe enough, respectable enough, or regulated enough to be worthy of our markets,” sounding very facetious. (Forbes) This hit Bitcoin temporarily but it held its ground as Bitcoin closed the week at $8236.80 up 12% for the week. Here are the rest of the settles: 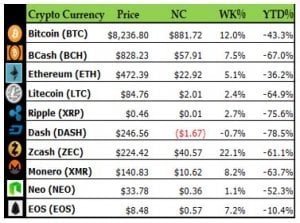 Bitmain the world’s largest cryptocurrency miner, may do an IPO in Hong Kong or in an overseas market with U.S. dollar denominated shares. (Fortune) Bitmain posted over $1 billion in profit in Q1 of this year, now don’t tell us Crypto doesn’t create value!

Ok, that does it, we’ve noticed our town is a ghost town during the day, suppose everyone is sneaking in a last-minute summer vacation. School is just around the corner, why the kids go back so soon is anyone’s guess. We feel the best weather in Chicago is August thru October, so maybe we should start school later and end later, although some parents may opt for year-round babysitting we mean school. Anyway, we hope you have an excellent rest of the week, good luck with all your endeavors and as always, keep your eyes on the prize! Cheers!

If you enjoyed reading this post, get it delivered to your email box weekly: http://info.capitaltradinggroup.com/ctgs-weekly-unique-insights-newsletter-0-1

Capital Trading Group, LLLP ("CTG") is an investment firm that believes safety and trust are the two most sought after attributes among investors and money managers alike. For over 30 years we have built our business and reputation in efforts to mitigate risk through diversification. We forge long-term relationships with both investors and money managers otherwise known as Commodity Trading Advisors (CTAs).