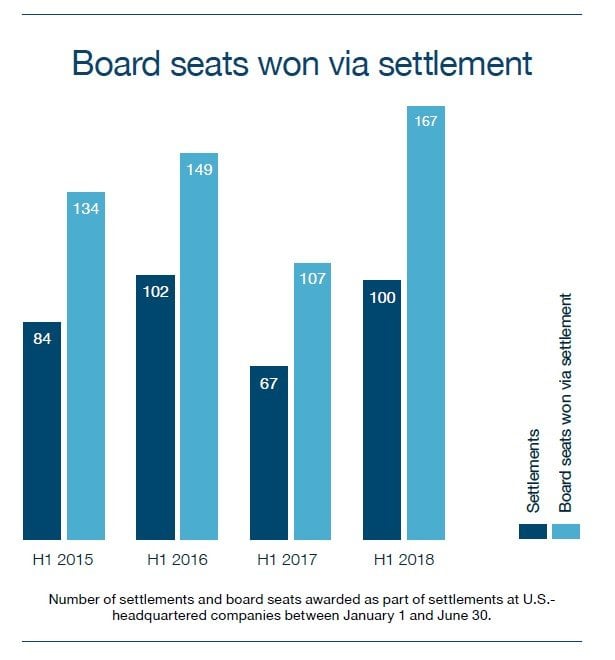 The Activist Investing Half-Year Review 2018, produced by Activist Insight in association with Olshan Frome Wolosky, was released today. The special edition of Activist Insight Monthly magazine analyzes trends in shareholder activism during the first six months of the year.

According to data from Activist Insight, activist investors in the U.S. had gained more board seats by June 30 than in the same period, and won more contested votes for board seats.

Activists gained 167 board seats through settlements during the first half of 2018, representing a 56% increase to the 107 seats obtained through the same means in the same period last year. In addition, activists won 27 board seats in proxy contests that went to vote year-to-date, the highest number since 2014.

The results reflect a renewed interest in settlements, as the number increased 49% year-to-date from the amount in the same period, with 100 settlements in the first half of 2018 compared to 67 during the same period in 2017. Meanwhile, the number of proxy contests decreased from 18 to 16. 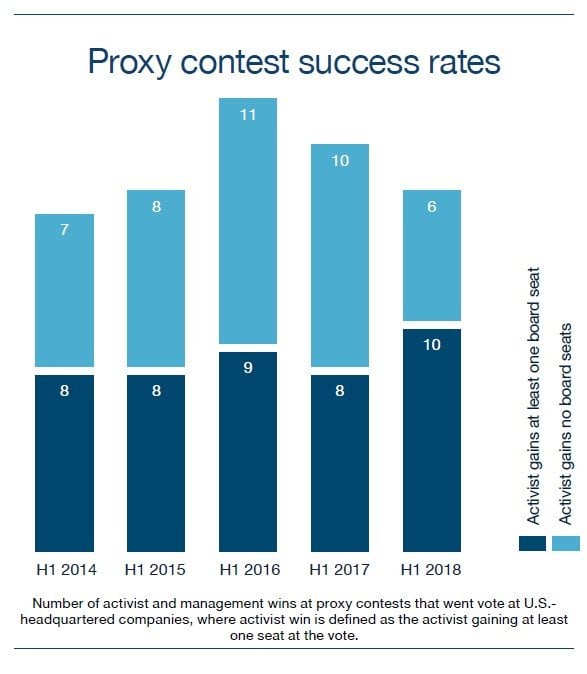 Other highlights from the Half-Year Review:

Josh Black, Activist Insight’s Editor-in-Chief: “Activists moved quickly to take advantage of a favorable environment for M&A in 2018 but continued to downplay requests for capital to be returned to shareholders – perhaps because companies so readily repurchased shares on their own. Six withhold campaigns and the first use of the universal proxy card made this proxy season an unpredictable and exciting one to cover."

Andrew Freedman, co-chair of Olshan’s Shareholder Activism & Engagement Practice Group: “No companies – regardless of jurisdiction, size or ownership structure – are beyond an activist campaign. Since many undervalued opportunities lie with companies that have either remained under the radar or are so entrenched that activists have steered clear, investors now realize putting a spotlight directly on a company and its numerous shortcomings, governance or otherwise can compel the company to action.”

Further data are contained in the Review, a copy of which can be accessed here.

For bespoke requests, please email [email protected] Requests may take up to 48 hours depending on the complexity of the research required.