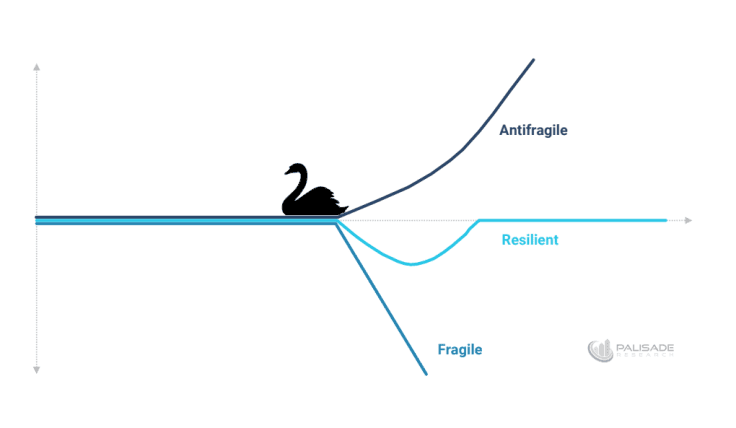 Today – bank stocks recorded their longest losing streak – ever. The S&P 500 Financial Index is down for the 12th straight day.

The irony of this is that for the last year we’ve seen stocks rally on the expectations that the banking sector would do well from Trump’s tax cuts, looser regulations, and most importantly – rising rates.

But that’s far from what’s happening. . .

The 2 n’ 10 Rule is showing the U.S. yield curve at the flattest it’s been since September 2007 – the difference between 2-year Treasuries and 10-year Treasuries is only 35 basis points.

The bond market’s calling the Fed’s bluff – and yields will invert sooner than later. I also need to remind you that U.S. yield curve inversion has preceded the last seven straight recessions.

Ignoring all this, the mainstream continues talking about how the world’s central banks have control of everything. And will continue tightening – since all woes are in the past and only ‘golden days’ are ahead.

It seems like markets are actually buying this nonsense. . .

So like they say on Wall Street, the risk trade is back ‘on’ – and investors are expecting low volatility ahead.

It’s times like this that I can’t forget to recite the words from the late-economist – Hyman Mnsky: prolonged periods of low volatility is the breeding ground for extreme future volatility.

The worst thing that’s happened to the markets since last February after the ‘Volocaust’ – when the short volatility index (XIV) blew up overnight – is investors thinking it won’t happen again.

A little over four months later, and the market today’s already back to being huge net-sellers of volatility. . . 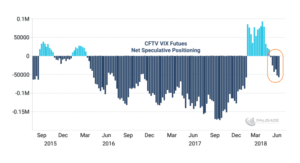 Or in other words, investors are back to picking up nickels and dimes in front of a steam roller. . .

This investor peace-and-serenity is the biggest risk in the market today that no one is talking about. The longer it goes on – the more violent the disorder will be.

All these black swans caught the market by surprise. But none of them caused ‘contagion’ – what I mean is, they didn’t spread across into other assets or markets.

This signals that investors believe there is plenty of liquidity in the markets. But is there?

With global central banks reducing their monetary easing – this is them turning the valve to the hose off.

Meanwhile, the U.S. Treasury and Federal Reserve together are creating a dollar shortage all on their own – with the former’s soaring deficits and the latter’s rate hikes and Quantitative Tightening (selling bonds).

So, not only is the liquidity valve turning off – but there’s a towel soaking up what’s left.

This illiquidity will dramatically affect markets. Investors will struggle to unwind positions when there will be no ‘bids’ available. They will either have to keep those investments and pray for the best. Or ‘fire sell’ to get out at any cost.

We know that in complex systems – such as markets – a crisis can occur out of nowhere for no real reason – and the bigger the system, the bigger the crisis.

For instance, 5 – 10 people walking out of a movie theater won’t worry anyone. But if one-third of the crowd got up and started walking out – that won’t go unnoticed. And even though you don’t know why they’re walking out – you will see others getting up and leaving, only because they think everyone knows something they don’t.

Now imagine if someone yelled ‘FIRE’ in the theater and the full crowd gets up to run out. There would be chaos trying to get everyone out through that little hall way with the exit door. This is called ‘bottlenecking’.

These kinds of panics and flash-crashes are growing more frequent and it’s only going to get worse as liquidity dries up and investors stay complacent for too long. . . 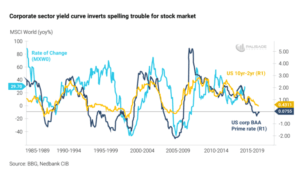 To summarize all this – the markets are growing more fragile each day. And the more fragile something is, the more delicate it becomes.

I expect there to be more cracks going forward – like the three black swans we’ve already had in 2018 – and each one being deeper and happening more often.

But we need to ask ourselves: how much more damage can the frail system take until it finally shatters?

With the markets back to shorting volatility and ignoring the risks ahead, this is the time to take advantage of it – to leave the theater first; going by unnoticed.

Using the radical ideas from the trader-turned-philosopher – Nassim Taleb – investors need to find the things that will benefit from the increasing cracks and growing turmoil.

This is known as ‘antifragile’ – things that gain from disorder.

My favorite example of anti-fragility comes from the 2015 movie, The Big Short.

A few contrarian investors saw that the housing bubble in 2006 was coming to an end. And instead of simply sitting on cash (being resilient), they positioned themselves instead to profit from the coming collapse. They did this through buying credit-default insurance and long-dated put options on construction and bank stocks. 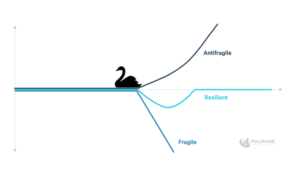 With Central Banks worldwide ending the liquidity that propped up the markets since 2008 – it’s time to start positioning correctly and become anti-fragile.

Here are a few pointers from Minsky and Taleb to memorize before the next economic crack happens. . .

1. Avoid fragile things – remember, no one will want to buy a broken vase from you. And being fragile is when your downside is greater than your upside.

2. Don’t short volatility – this is like the fish nibbling at the hook for food, and even though it works 95% of the time and the fish steals the worm, there’s that 5% chance it’ll get hooked and that’s the end.

3. When the markets are calm and peaceful, that’s when you need to worry most.

4. Become Anti-fragile – find assets that will profit during volatile and chaotic times. Stay away from what doesn’t.

You won’t see any of these talked about on CNBC. Or taught to you in college.

But if you look back through history at all the long-term successful investors – they not only survived the cracks. But made huge gains when things finally shattered. . .