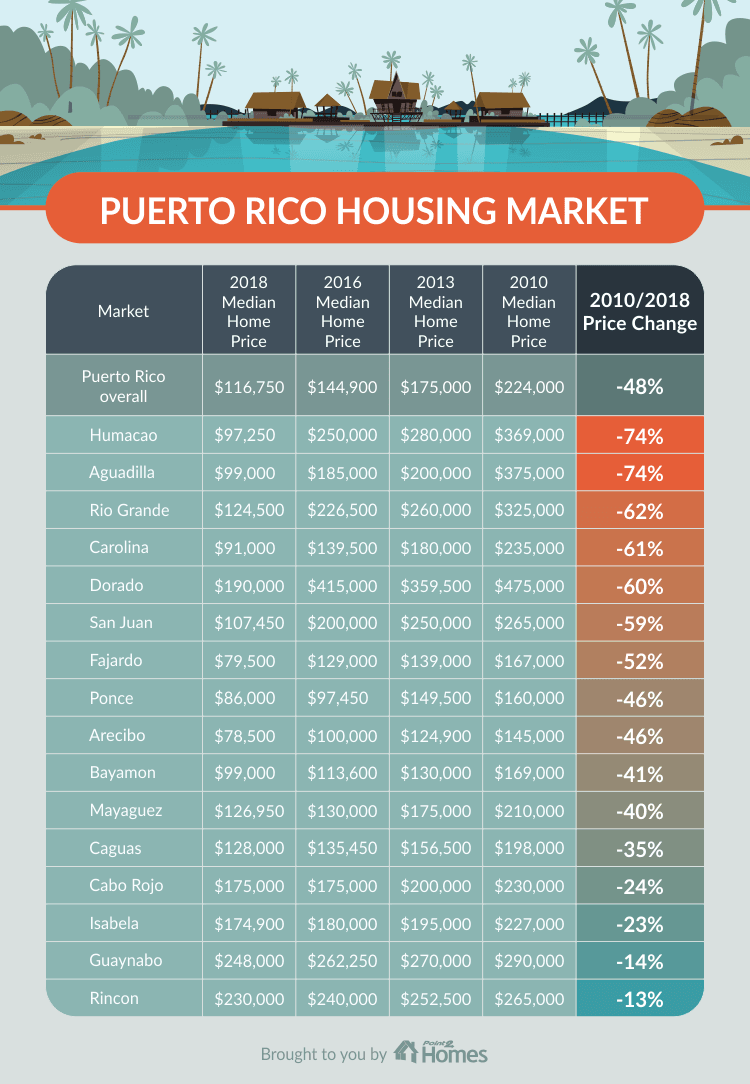 With Puerto Rico suffering extensive storm destruction, there were many concerns about the long-lasting effects on its real estate industry. With this in mind, we generated an overview of the island’s housing sector nine months after the disastrous event occurred.

This study evaluates to what extent Hurricane Maria affected the Puerto Rico real estate market. We analyzed asking prices for homes sold on the island, before and after the natural disaster. We looked into the current demand for real estate in Puerto Rico by checking traffic patterns in Google, as well as on Point2 Homes, one of the top real estate websites for Americans and Canadians looking to buy property on the island.

In addition, we surveyed home buyers and local real estate agents to get their feel for the market and get a better picture of the demand and supply aspect.

Here’s what we uncovered:

The damage caused by Hurricane Maria was estimated at around $90 billion, with housing representing the largest part of storm destruction (assessed at $37 billion). Over 470,000 properties were hit, out of which a fifth were completely ruined and the rest severely damaged. More than 16,000 residents were already facing foreclosure, according to the New York Times, while informal housing had long been a common practice on the island—only 65% of the homes were officially registered before the disastrous event occurred.

Puerto Rico has been going through an economic recession over the past 10 years. Median home prices had already been dropping since the housing bubble burst back in 2008, while the hurricane only added to the existing downward trend. Here’s how:

Here are some specific figures for the top 16 most looked-up Puerto Rican markets on the portal and the changes that they experienced in home prices:

Humacao and Aguadilla suffered the biggest home price depreciation of all the markets that we analyzed – a staggering 74% in eight years. Considered the hurricane’s ground zero, Humacao experienced the most significant drop in value from 2016 to 2018 out of all the cities.

Homes for sale in Guaynabo and Rincon are the most expensive in the country today and underwent the smallest price decreases. Arecibo, Fajardo, and Ponce, on the other hand, offer the most affordable options, with properties at around half the cost compared to eight years ago.

Real estate in San Juan, the most looked-up Puerto Rican destination, has become considerably more accessible. Experiencing a huge 59% drop, prices have decreased from a median of $265,000 to $107,450.

95% of all home shoppers start their buying process online, so to determine the interest in purchasing property on the island we turned to Google and our own website’s traffic analytics platform. Google Trends provided the first cues for an increased interest in the real estate market: 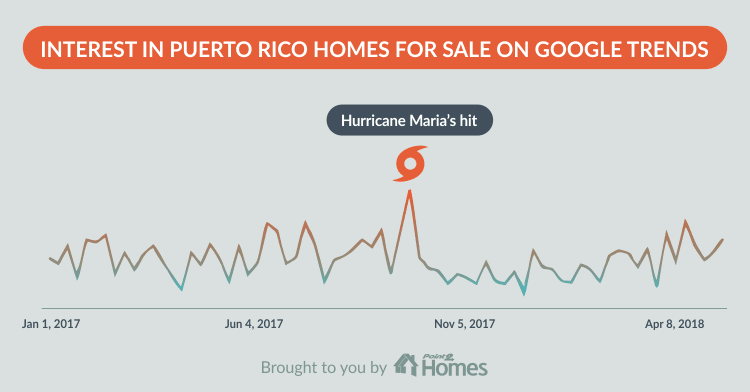 Traffic figures on Point2 Homes reinforce this upward tendency. Visits on the portal’s Puerto Rico Real Estate section stayed strong after Hurricane Maria; moreover, they are seeing an uptick in 2018.

What better way to get a feel for the Puerto Rico real estate market and people’s purchasing intent in the wake of Hurricane Maria than by talking to actual potential home buyers? To do this, we surveyed all users visiting the Puerto Rico section on Point2 Homes. We received answers from 435 visitors, 97% of which were U.S. mainland residents.

Based on the survey results, the island continues to be an attractive market for Americans looking to invest in low-priced real estate. In another study we released in April, Puerto Rico ranked 3rd in the top 30 home buying destinations in the Americas for U.S. residents, right after Mexico and Canada.

Out of all the respondents, 60% said they were interested in buying a Puerto Rican home, while 34% wanted to get a feel for the prices: 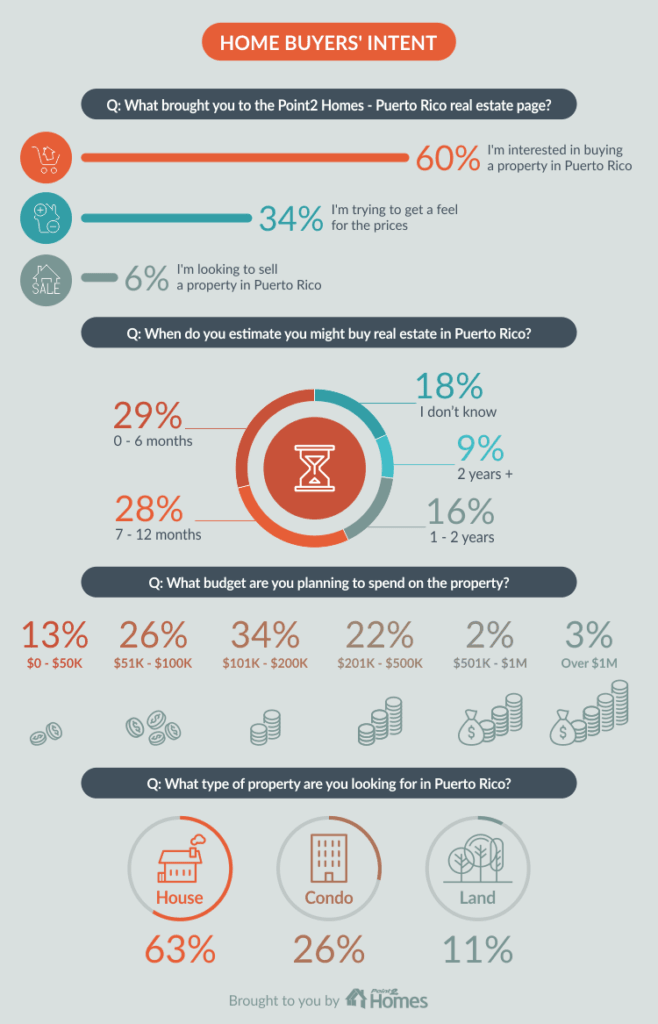 More than half of the respondents estimated they would buy a property in Puerto Rico within a year. The reasons for looking up residences here were quite diverse: investment opportunities (in 30% of the cases), vacation homes (22%), family and friends already living there (39%), etc. 78% of participants stated homes on the island caught their eye even before the hurricane hit.

When having to choose what type of property to buy, a little over 60% preferred a house, rather than a condo or land.

We reached out to the real estate professionals in Puerto Rico who have listings on Point2 Homes, to gain their insight on the island’s housing market after the hurricane. 48 local agents provided us with their input.

Based on the survey, professionals in Puerto Rico are quite positive about the rehabilitation of the real estate market. Here’s what they shared: 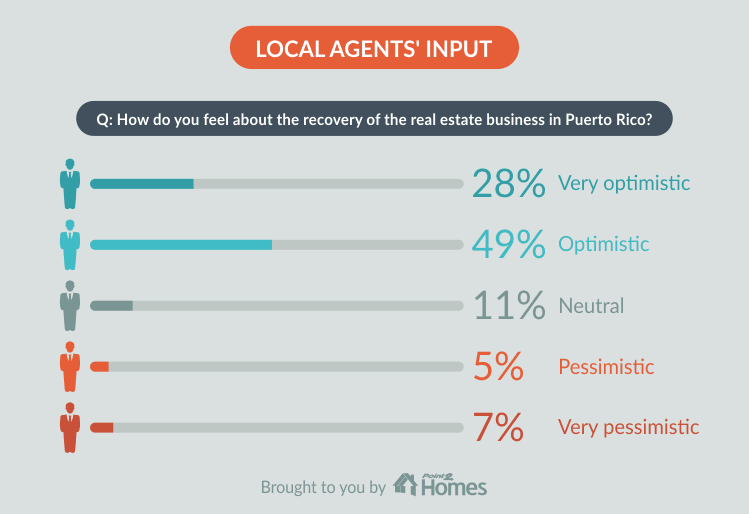 Almost half of the respondents were optimistic about the rehabilitation, while 28% of them were very optimistic about it. According to the professionals, even though Maria was an unfortunate event, it brought with it real estate opportunities as well: an active rental market and lower-priced homes that attract more buyers.

Puerto Rico is setting its hopes on tourism as a way to speed recovery, while voluntourism is also promoted and highly appreciated. Visitors are encouraged to not only aid in the rehabilitation of the island through cash influx but to also actively participate in helping out its residents through voluntary work.

More than 80% of Puerto Rico’s 155 hotels are back in business, welcoming travelers. The upcoming cruise season is expected to generate around $250 million in revenue from the brief visits of no fewer than 1.7 million people who have already booked their stay on the island.

Moreover, the increased coverage of the island in the media is seen as a great opportunity to boost awareness of this exotic destination.