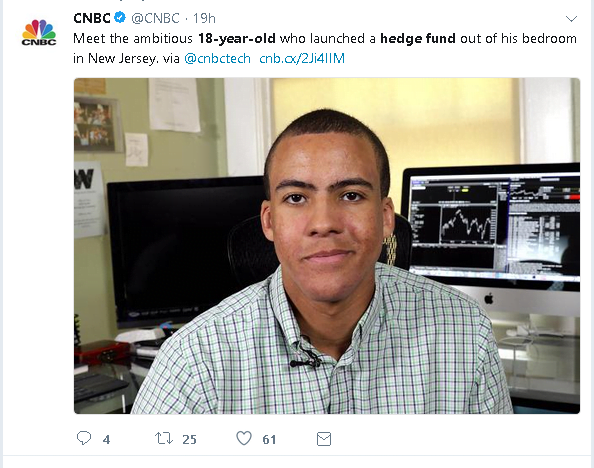 Cole Mattox seems to have the right stuff. The 18-year old hedge fund manager who was recently profiled by CNBC, fresh off a mentor program at Goldman Sachs, boasts of heading off to the University of Pennsylvania in the fall as a freshman where he hopes to continue developing trading algorithms in-between classes, homework and time spent with his girlfriend. It makes for an irresistible story, but in some cases not too dissimilar from the tale of Jacob Wohl. Wohl, banned by one regulator for life and who settled fraud charges with another, sits with Mattox on the North Tabor Capital board of advisors.

Why did Cole Mattox launch a hedge fund “from his bedroom?”

“It would look good on a college application,” he told CNBC while also pointing to the potential to make money.

And for his qualifications, there is his mother who provides a reference. “He’s a teenager. But he’s a teenager who knows so much,” Kuae Mattox, an editorial producer for CNN, said. “He probably knows more than a lot of folks I’ve met that work on Wall Street.”

When he is not watching Ted Talks under the covers at night “he's testing trading strategies — which is, like, a little weird for like a 17-year-old," says father Teddy.

In the public interview, Cole Mattox acknowledges he “found investors” for the fund and he “does pretty well” for someone his age. In fact, his reaching out to a potential early investor is a solicitation that appears to be bearing fruit. In an interview with CNBC, braces framing his broad smile, he said his communications with a former SEC lawyer about starting a hedge fund initially generated doubt which has changed. “That guy has now called me and asked, ‘hey can I get involved?’” Also in the interview, Mattox paradoxically claimed to only work with family and friends when they reached out to him, which would meet regulatory guidelines that prohibit certain types of solicitations from exempt fund managers.

According to the text of the article, Mattox currently has five accredited investor clients and manages under $1 million as an exempt hedge fund. The graphic in the video claimed he was managing over $1 million.

A search of the FINRA Broker check and the SEC Edgar system revealed that neither Cole Mattox or North Tabor Capital are registered with regulators and have not filed a Form D. Such registration is common for fund managers, but the SEC regulations regarding who is required to register can be murky, requiring legal analysis. Based on the scope of Mattox’s fund and if he does not solicit investors, working only with family and friends, the lack of SEC registration could be permissible under certain circumstance

National regulations and state regulations are not often the same. Under New Jersey laws (and most state rules), investment advisors (and even mere solicitors)  are required to be registered with a CRD number and ADV filing. A check of the FINRA BrokerCheck system and the SEC’s website revealed that Tabor Capital or Mattox had no such registration. Regulators have repeatedly warned investors not to invest with fund managers who are not registered.

Cole Mattox shares some commonality with Jacob Wohl, who sits on Tabor Capital’s board of advisors. Unlike Mattox, however, Wohl has a checkered regulatory past. See the Wohl files here.

After initially making a name for himself as a “teen hedge fund manager,” actively promoted in national media, Wohl made the fateful decision to enter the derivatives industry and operate as a “managed futures CTA.” In doing so, Wohl entered a different regulatory environment and was now under the watchful eyes of the Commodity Futures Trading Commission (CFTC) and the National Futures Association (NFA) who, like FINRA, are the non-governmental regulatory authority policing the industry for fraud, among other market stabilizing functions.

When he registered with the NFA, his promotional materials, which are required to be reviewed by regulators prior to use, boasted spectacular investment returns. Wohl got on regulatory radar, but the situation wasn’t escalated until allegations of fraud put customer segregated funds at risk. Under such circumstances, regulators are known to become more expedient in their investigations. Wohl was required to participate in a routine audit of operations, where performance claims can be checked by the NFA among a variety of standardized procedures. But with fraud suspicions at play, the regulator turned up the heat with a surprise inspection taking place in his then home. Wohl refused to allow the inspectors access to the property and he quickly withdrew from membership as customer money was confirmed missing from accounts he was managing. The NFA banned Wohl from membership as a result. Wohl also ran afoul of Arizona state regulators, who charged him with fraud in conjunction with his solicitations of investments in the state, the settlement of which required Wohl to pay a fine.

Cole Mattox, meanwhile, basks in the glory that comes from being a teen hedge fund manager and relishes the challenges. “I enjoy proving people wrong,” he says of skeptics.