From Whitney Tilson’s latest email to investors on shorselling

We’re teaching our three programs again in NYC on June 12-16 (only two weeks from today!) and then less than a month later in London on July 7-11 Pease use “VW10” for a discount!

2) Seeking Alpha just published this interview, in which I share my advice with those thinking of starting their own funds as well as those seeking to grow exisiting ones. Interview With Whitney Tilson: The Launch Of Kase Learning And Running A Hedge Fund, https://seekingalpha.com/article/4177128-sa-interview-whitney-tilson-launch-kase-learning-running-hedge-fund. Excerpt:

…the vast majority of people are better off – now and forever – developing and applying their skills within a larger organization, having a successful career, rather than being entrepreneurs.

…Growing a fund is really hard and very few people succeed in doing it. I can’t tell you how many energetic, talented young investors I’ve seen over the years launch funds, get to $5-10 million under management, and then stall out, never growing beyond this. At this size, the business is losing money – not to mention the opportunity cost of not having a job and earning a salary – so these folks are just bleeding, year after year, refusing to give up on their dream…but it never materializes.

… prospective investors need to be wooed. But instead of doing this, I did the dating equivalent of swiping them on Tinder and then immediately made a marriage proposal. Not surprisingly, few people took me up on my offer.

… This is a business where you have to make hay when the sun is shining. The sun shone on me for a dozen years and I did well  – I’m not complaining about my lot in life  – but I feel enormous regret knowing that I only made a fraction of what I should have made because I didn’t recognize and take full advantage of the opportunity.

In the next stage of my life with Kase Learning, I want to help the next generation of entrepreneurial investors like me achieve similar success  – and take full advantage of it!

3) One of our students, Gabriel Grego of Quintessential Capital Management, exposed Folli Follie as a total fraud during his presentation at our shorting conference on May 3. The stock immediately plunged by 70% and last Friday the shares were halted (and, I suspect, will never trade again). Kudos Gabriel! Here is a Bloomberg article about it:

Folli Follie Suspended Amid Lack of Data Over its Financials

By Marcus Bensasson and Luca Casiraghi

The Hellenic Capital Markets Commission said in a statement Friday that the company “declared its inability to provide data regarding its financial statements.” The retailer earlier said

it had requested a halt to trading until accounting firm EY completes an audit of its accounts.

(Speakers from the conference

4) In the weeks before the conference I wrote a four-part series on short selling, Lessons from 15 Years of Short Selling, which you can read here:

5) I’ve been reading about how global consumer products companies are under pressure, which is why most of their stocks are down quite a bit, so on a lark I decided to pull up the revenues and operating income, going back decades, for two of the most iconic companies in the space, Coca-Cola and PepsiCo.

I expected weakness, but the reality was much worse than I expected. As you can see in the charts below: 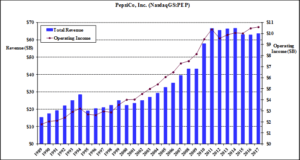