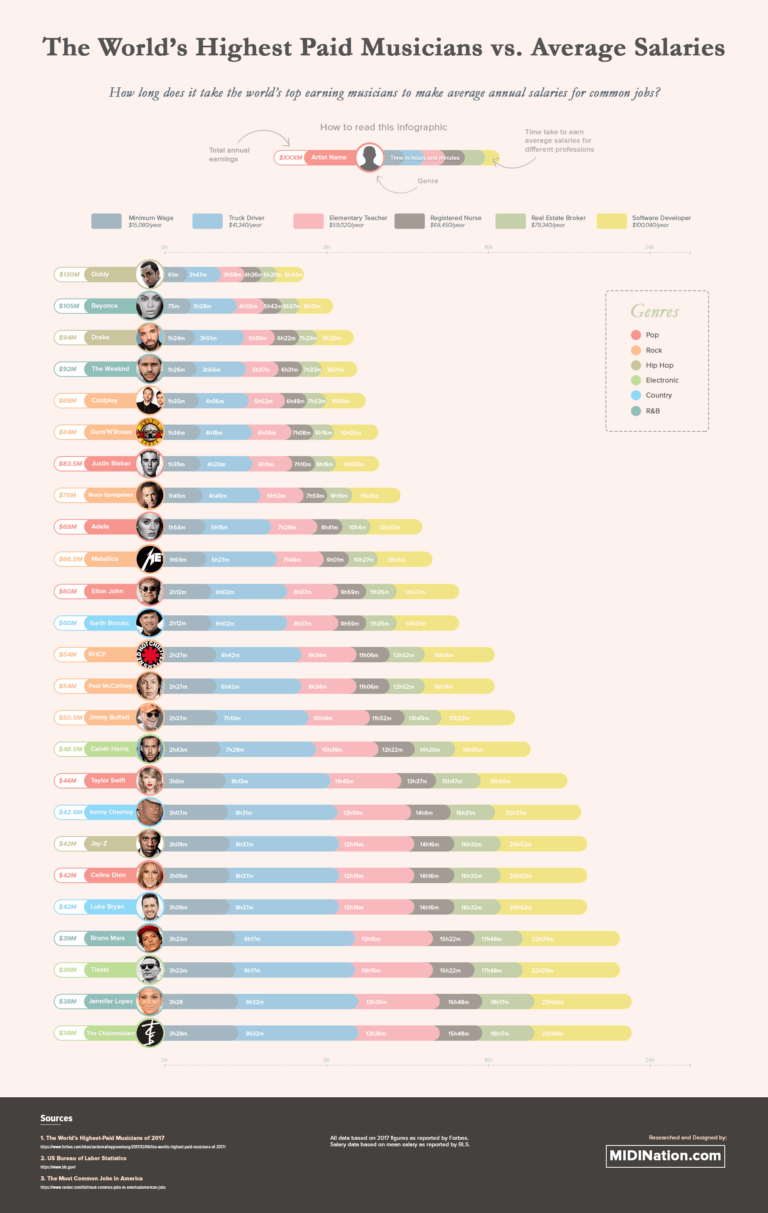 It’s no secret that the world’s top musicians make a lot of money. Between concerts, album sales, and business ventures, a top mainstream musician can easily hope to earn tens of millions of dollars.

Nothing illustrates their massive wealth - and the rate at which they earn it - better than comparing it against average incomes in common jobs - nurses, teachers, truck drivers, etc.

So at MIDINation, we gathered the data and crunched the numbers to answer the all-important question: “How quickly would Beyonce or Bieber make my annual salary?”

We started our search by looking at the world’s 25 highest paid musicians in 2017, according to Forbes. Surprisingly, a musician who didn’t even release any music in 2017 - Diddy - topped the list, thanks to his extensive business ventures.

The other names on this were less surprising. Beyonce, Drake, The Weeknd, and Coldplay rounded up the top five thanks to extensive touring and album sales.

A number of older artists found a spot among the 25 as well - Bruce Springsteen, Paul McCartney, Elton John, etc.

Adele’s dropped $11.6M while McCartney’s remained nearly the same at $54M ($2.5M, after all, is pocket change to McCartney).

Here’s the income movement for the top 15 musicians on the 2017 list:

For good measure, we also decided to map the top musicians by genre. At an average of $88M/artist, hip-hop artists topped the list - a sign of the genre’s global dominance.

At that average, a minimum wage worker working for 52 weeks will have to work for nearly 4,190 years to make the same amount of money.

When Compared to Common Jobs

Once we had our data, we made a list of some common professions - truck drivers, teachers, nurses, real estate brokers, and software professionals. We mapped their average income from BLS data.

In terms of average earnings, we figured we had a good representation of incomes from the “working class” (truck drivers at $41k/year) to “comfortably middle class” (software developers at $100k/year).

For good measure, we also included minimum wage workers in our comparison.

We now asked the most important question:

We crunched the data and came up with these numbers shown below: 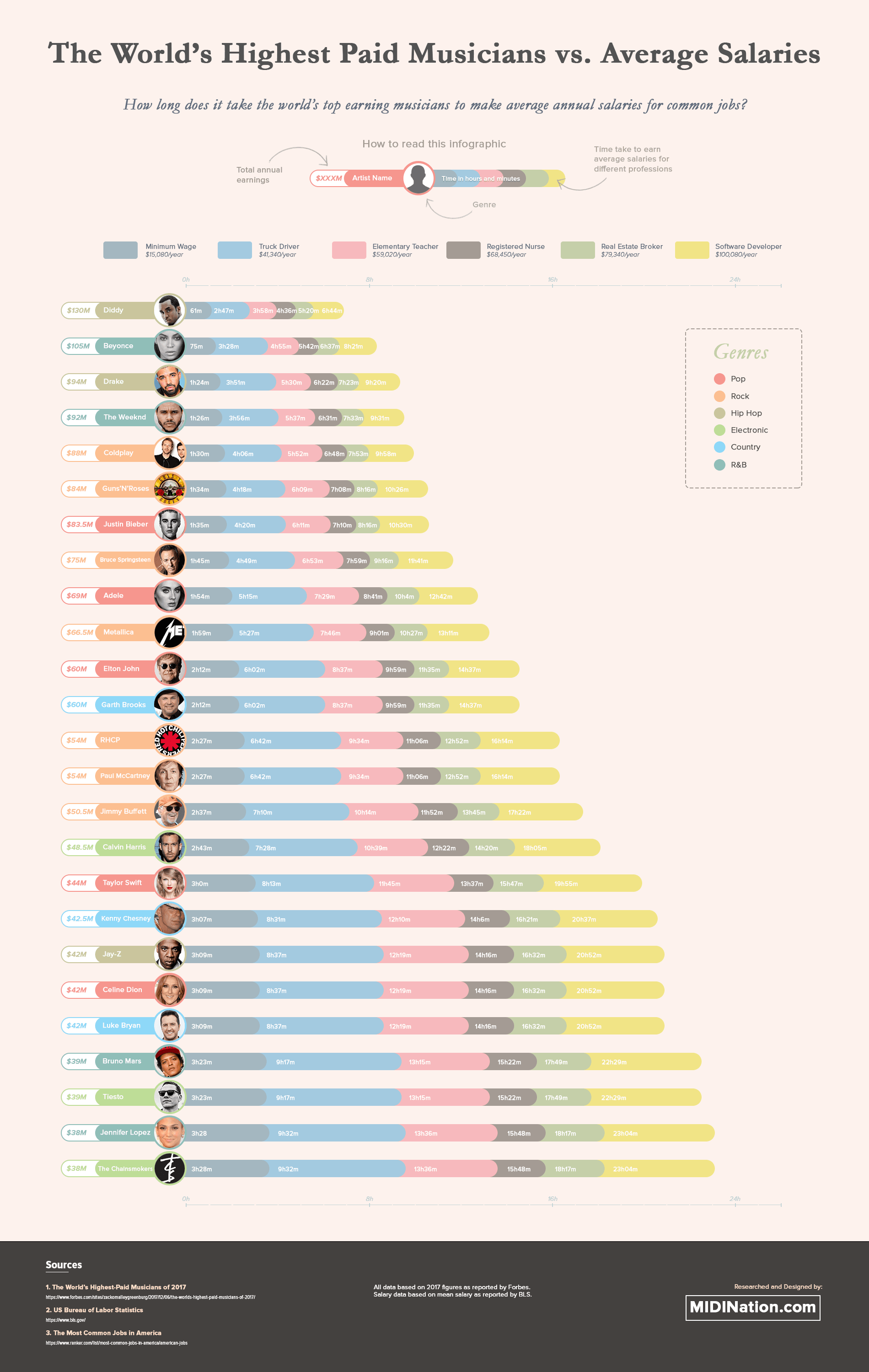 In its latest report, Oxfam International concluded that the world’s richest 1 percent bagged 82% of all wealth created in 2017. In its summary, the report even noted that it would take the CEO of a leading fashion brand just 4 days to make the average income for a Bangladeshi factory worker.

In light of this report, a musician making a software developer’s salary in under a day can be seen as just another example of the income inequality Oxfam talks about.

After all, should an artist really make that much more than his fans?

This is a legitimate question and one we couldn’t really give a straight answer to.

You have to consider that top musicians and celebrities are a rare breed. Not all musicians end up being Beyonce or Bieber.

In fact, according to BLS, the median pay for singers and musicians is just $26.96/hour. At that rate, it would take an average musician 1,872 years to make Beyonce’s 2017 annual income.

Clearly, these top musicians are the exception, not the rule.

Also consider that most of the top musicians made their money not through music sales or even touring but through business ventures. Diddy’s presence at the top of the list is a good example. Another example is Dr. Dre, who made a big part of his nearly $1B fortune off the sale of Beats to Apple, and not his music.

Which is to say: musicians might get their start with their music, but they often roll in the big bucks through their other ventures.

If you’re a musician, what’s more concerning to you is the gap between top musicians and average artists. According to one report, the top 1 percent of musicians accounted for 77% of all revenue in 2013. Digital platforms were supposed to level the playing field, but they seem to be skewing even more heavily in favor of top artists.

What would you call this - income inequality, injustice, or just rewards?

See this page for more details about the study.