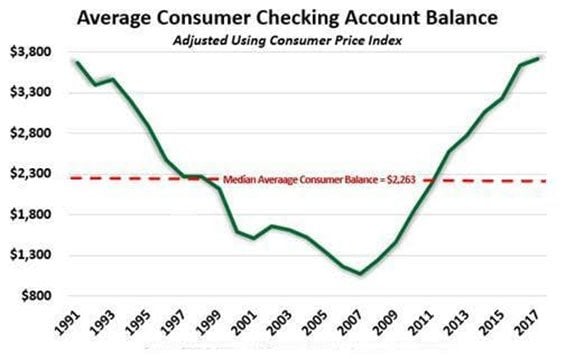 Back in the old days, before cellphones and pocket video games destroyed childhood, dining out with the family usually involved the “kid’s placemat.”

I’m sure you remember those. It was a piece of paper with a bunch of silly games that would keep Junior busy while Mom and Dad were trying to decide what to order.

You still see them occasionally. One of the games that still manages to grab the attention of our screen-addicted offspring is “connect the dots.” You use a pencil to connect dots labeled in a numerical sequence to see a picture that you didn’t know was there.

“Connect the dots” is essentially the game that we financial writers play. Our job is to generate a picture from seemingly unconnected data points. That picture could be the future of a firm’s stock price, the direction of the stock market or the health of the economy.

There’s one enormous difference between the kiddie version of “connect the dots” and ours, however … we must identify the dots to connect by ourselves.

Read on, as I do just that … but be aware that the outcome is hardly a game.

The Banyan Hill Publishing writing crew likes to share interesting tidbits of news and data with each other. It gives us ideas and helps to stimulate debate.

The other day, I shared a link to an article that pointed out that the inflation-adjusted average balance of U.S. individual checking accounts was the highest it’s been since 1991:

At one level, that’s good news. American saving habits haven’t been too good lately. In fact, the U.S. personal savings rate recently hit a low it hasn’t seen since just before the financial crash of 2008: 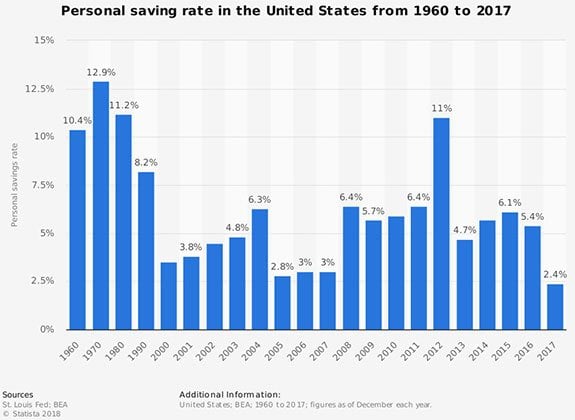 But wait a minute — how can we reconcile a historically low savings rate with historically high checking account balances?

Savings are defined as the amount left over when the cost of a person’s consumption expenditure is subtracted from the amount of disposable income they earn in a given period. Ergo, if you consistently spend less than you earn, the balance in your checking account will go up.

We know that although the unemployment rate has been falling, real incomes have been stagnant. So, we can rule that out as a source of rising average checking account balances.

Consumer spending has been rising, so that can’t be the reason:

But there’s another possibility.

From a national accounting perspective, putting your excess cash to work in the stock market is the same as leaving it in your checking account. It’s still considered savings.

So, if real incomes aren’t rising, and consumer spending continues to grow, the only plausible explanation for rising checking account balances is that people are moving their savings out of the stock market and into cash.

1 Bucket Is Hot, the Other Cold…

When I was a young industrial policy researcher in South Africa, a visiting professor from the University of Sussex in the U.K. introduced me to a truism about statistics: They can conceal as well as illuminate.

The same applies to stock holdings in the United States. Those of us who own stocks are so fixated on the performance of the stock market that it’s easy to forget we’re a minority of Americans. 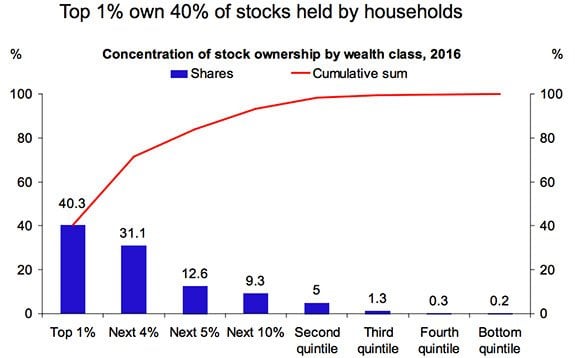 That means that if U.S. households are pulling their savings out of the stock market and holding them in checking accounts, causing the average balance to go up, the very wealthiest households are the ones doing it. The other 80% of Americans don’t own enough stocks to make a difference.

But hang on a second … wasn’t the recent huge tax cut supposed to lead to a surge in investment? After all, those same wealthiest households received by far the bulk of the December tax cuts: 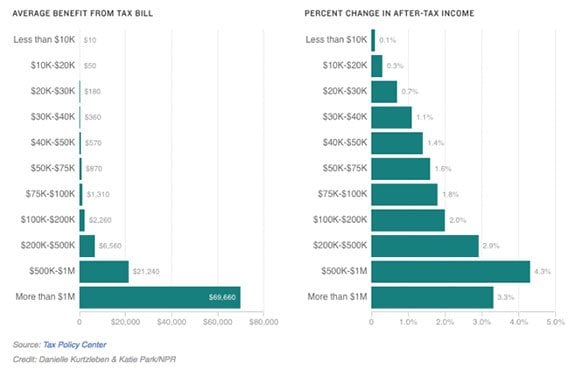 If the logic behind the big tax cuts were true, we should see money flowing into the stock market, not out of it.

The increasing reversion to cash holdings on the part of Americans who can afford to invest in the stock market is the final dot in our picture.

That picture shows an economy that has just been gifted a massive cash windfall in the form of corporate and high-end individual tax cuts. That cash was supposed to goose the stock market.

Instead, most of it is just sitting around, not doing anything. Meanwhile, the major U.S. stock indexes are struggling to stay in positive territory for the year.

China says it’s not prepared to negotiate the two key elements of the Trump administration’s trade proposals. Tariff exemptions on European aluminum and steel are about to expire, and nobody knows whether they will be extended.

Employment is down, and interest rates are up, but the economy is stuck in the doldrums. Everybody in Washington is hiring a lawyer … even the lawyers are hiring lawyers.

It’s a good time to keep your powder dry by hoarding cash.

So let’s give our “connect the dots” picture a title: Waiting to See What Happens Next.