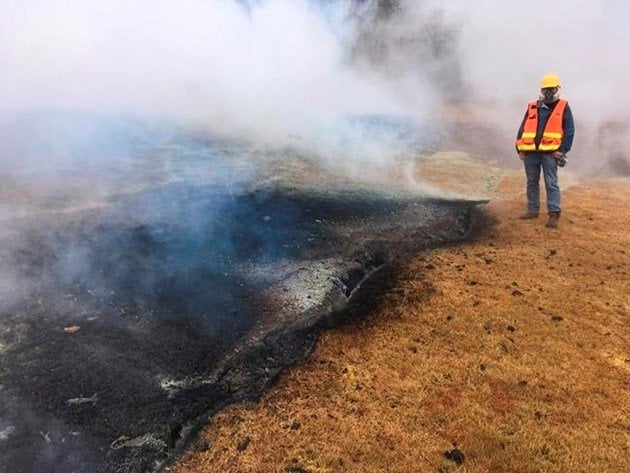 The Kilauea eruption that is ongoing at the moment, opened 14 fissures during the past week and now geologists are warming that Hawaii’s volcano could undergo a series of exploding eruptions from its summit, which would result in ejecting huge rocks and ash into the air.

Kilauea is one of the most active volcanoes in the world, and the threat of explosive activity will increase once lava drains from the summit of the volcano. The upcoming explosions will be possible in the upcoming weeks, if the lava column drops to the groundwater table, according to the U.S. Geological Survey.

If the lava goes down to the groundwater level, the water will get heated up which will result in creating steam. That steam builds up pressure when rocks fall and form a dam in the volcano’s wall which will cause steam-driven explosions with very little warning, the Hawaiian Volcano Observatory (HVO) told the Honolulu Star-Advertiser.

The Kilauea eruption opened 14 fissures including in a residential subdivision called Leilani Estates, resulting in lava destroying 35 structures, while a second subdivision is under evacuation orders.

The U.S. Geological Survey is monitoring the entire situation, while the federal government is looking at the eruption using satellites. They use an instrument called the Advanced Spaceborne Thermal Emission and Reflection Radiometer, known as ASTER, which looks at areas that are hotter than average. This instruments allows scientists to keep an eye on new fissures as well as other volcanic activity.

ASTER has been keeping an eye on these areas since 1999. It watches for changes that occur on Earth’s surface, which includes volcanic activity and changes in the temperature, vegetation and soil types. Using ASTER’s data, scientists have created an image that shows plants growing in red while old lava flows are shown in black.

The image shows patches of yellow on the left side that mark hot areas, which are from Kilauea’s summit. The patch in the middle belongs to the  Pu‘u ‘Ō‘ō crater, in which Kilauea has been erupting for more than three decades. Also, the patch on the right side is the new fissures that formed at Leilani Estates last week. The images were taken by the satellite on May 6 and can be seen on NASA’s site.

ASTER also keeps an eye on sulfur dioxide gas which is produced by the volcano during the eruptions, and quieter cracks in the ground. The sulfur dioxide combines with carbon dioxide and water in order to create volcanic smog or vog.

The floor of Kilauea’s crater started collapsing on April 30, followed by earthquakes. One of those earthquakes measured a magnitude of 6.9 which made lava get pushed into new underground areas that broke through the ground in areas such as Leilani Estates.

The volcano is the youngest and southeastern-most volcano located in Hawaii. The Kilauea eruption activity has been continuously tracked since it started in 1983, which makes it one of the most active volcanoes in the world.