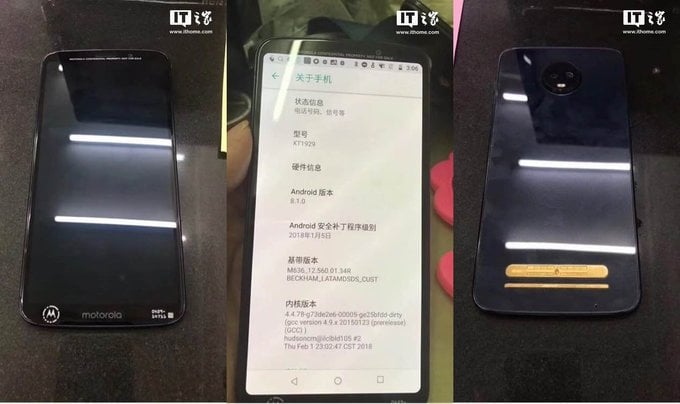 Moto G6 and ES were the recent launches of Motorola. The company is expected to launch Moto Z3 Play under its Z series. The phone in the leaked images looks very similar to the that of the render. Moto Z3 Play is expected to have a dual camera sensor and the pogo pins which enables Moto Mods in this smartphone.

In terms of specifications, Moto Z3 Play will have a 6-inch Full HD+ display with a resolution of 1080×2160 pixels. The Full View screen will have 18:9 aspect ratio display and there will be no notch at the top, a feature common on Android phones these days. The phone could sport a 5MP front shooter. Moto Z3 Play could be powered by the Snapdragon 636 processor with 4GB RAM and 32GB/ 64GB storage. The battery is said to be 3,000mAh one. The phone will run Android Oreo out-of-the-box.

A report on Droid Life suggests Z3 Play will launch alongside Moto Z3 and a third Moto Z3 series phone that will come with Snapdragon 845 and a high-res display. The details of the third Moto Z3 variant are not known at this point but it could launch at a later stage. The phones could include a white software button, instead of a physical home button.

Few designs in Z3 Play are similar to that of Moto Z2 Play. However, there are few features like fingerprint reader and face sensor are missing from Moto Z3 Play. Rumors are there that one side of the smartphone is embedded into the bevel. The connector pins for Moto Mods are located on the bottom part of the back panel.

The pricing details of this smartphone are not confirmed yet. But the phone is expected to launch in June, this year.