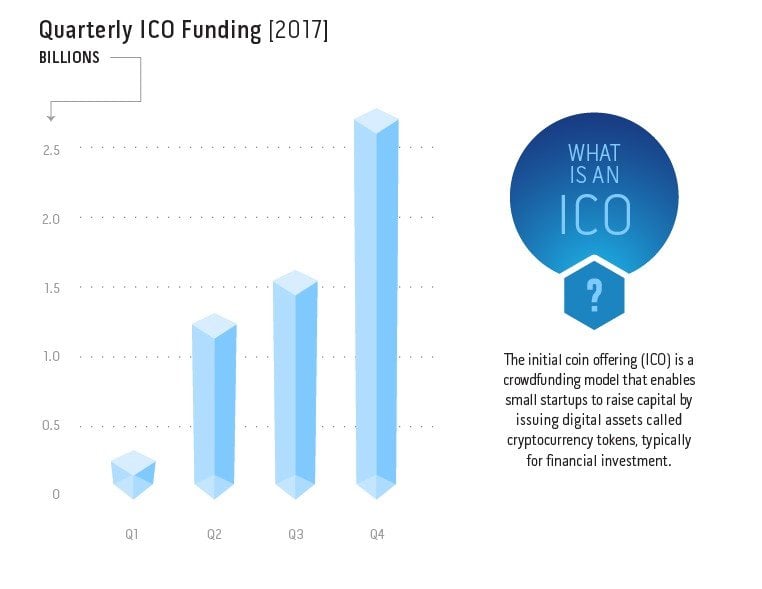 For any ambitious startup founder, the traditional route to funding goes through angel/seed investors and then eventually to the big venture capitalists.

The sophisticated players in this funding landscape make significant amounts of dough by spotting game-changing opportunities in their early stages, and then applying their insights, connections, and experience to these startups to make them financially viable. Finally, they guide the successful company to an exit, take their returns, and then distribute to the partners.

But what if startups, especially those related to the blockchain, were able to raise money from everyone simultaneously? What if the traditional gatekeepers didn’t matter as much?

Last year, it became clear that Initial Coin Offerings (ICOs) would start to challenge traditional venture capital, as funding raised through them exploded by over 20x.

Today’s infographic from Vanbex Ventures shows key statistics around this phenomenon, as well as the evolving reception from venture capital and institutional investors.

Needless to say, the relationship between ICOs and venture capital is a conflicted one.

On one hand, it represents the inevitable disruption of many different elements of the traditional business model. On the other hand, the ICO space is too tantalizing to ignore: cryptocurrencies are worth nearly $0.5 trillion, and those that put money in early saw returns in the quadruple digits.

The $5.3 billion boom in ICOs in 2017 had no problems surpassing traditional early-stage venture capital for blockchain-adjacent startups, which only saw $0.95 billion in funding.

While most VCs were slow to adapt, there have been increasing signs of interest – even despite the existing regulatory concerns. In particular, the idea of additional liquidity appeals to these investors since tokens can be sold at any point. This gives an advantage over traditional models, where a liquidity event such as an IPO or acquisition is necessary.

As a result, some VCs are shifting how they work with blockchain startups. They will pre-acquire tokens prior to a public ICO, and even consult with startups to help them maximize the value of tokens and the underlying technology.

There’s such an institutional appetite to get exposure to this. It’s a half-a-trillion-dollar asset class that nobody owns. That’s a pretty wild circumstance.

In fact, 17% of global hedge fund managers say they currently (or plan to) invest in cryptocurrency. At the same time, over 100 crypto hedge funds have popped up over the years – another sign of a widening and market landscape.