Last week we talked about how the market derives its expectations (it simply extrapolates current data ad infinitum) along with why it’s important to view macro data at the second derivative level (the rate of change leads important inflections in the trend).

We used these mental models to comment on a macro development we’re tracking, which is the decelerating growth in China. As well as what this could mean for markets. You can read the piece here.

These concepts are going to be vital in understanding how markets will unfold over the coming year. And this is because we’re on the cusp of some important trend reversals that will be occuring at same time the market has become firmly anchored to the old narrative — in this game, winners anticipate and losers extrapolate.

The driving force behind this trend-change will be a strengthening dollar. And it’s likely to kick into gear a positive reflexive loop that will drive large returns for those who are positioned correctly.

This reflexive loop is centered around Soros’ idea of benign and vicious circles or what we refer to as the core/periphery model.

We’ve written extensively on this idea which you can read here. But the gist of it is that bull markets that are accompanied by a rising dollar tend to last longer than ones where the dollar is falling. That’s because there are numerous self-reinforcing processes (hence Soros’ use of the word “circle”) that drive an extended trend.

Here’s Soros on the power of benign circles (emphasis mine):

The longer a benign circle lasts, the more attractive it is to hold financial assets in the appreciating currency and the more important the exchange rate becomes in calculating total return. Those who are inclined to fight the trend are progressively eliminated and in the end only trend followers survive as active participants. As speculation gains in importance, other factors lose their influence. There is nothing to guide speculators but the market itself, and the market is dominated by trend followers.

The dollar recently broke out of a 4-month consolidation zone and is now rocketing higher; fueled by crowded short positioning and powerful fundamental tailwinds (ie, rate and growth differentials).

If this bullish dollar trend continues it’ll become the most powerful macro driver of markets over the coming year(s). Not only will it extend the duration of the current bull market but it will drastically impact market trends that have dominated over the last 2-years. We often refer to the US dollar as Archimedes’ Lever. This is now more true than ever…

The incoming data suggests this trend is just getting started (again).

US relative growth versus the rest of the world (ROW) has rebounded and is expected to accelerate in the coming quarters. Stronger relative growth means more attractive returns which draws more capital flows that in turn push up the dollar, increasing total investor returns thus making the US more attractive and giving birth to a feedback loop. 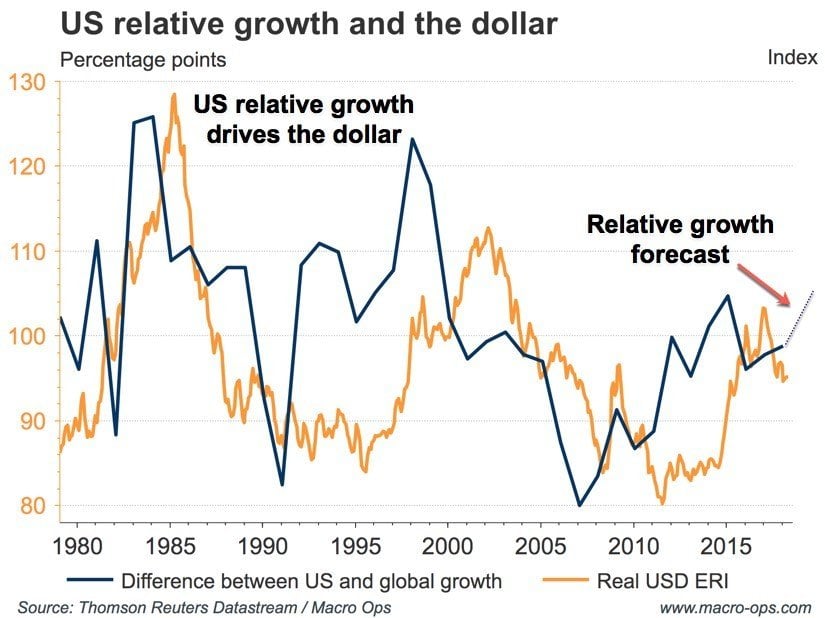 When looking at the dollar you have to analyze the US relative to Europe since the euro accounts for over 60% of the movement in the dollar on a trade-weighted basis. And on this front, the euro looks ready to kamikaze. 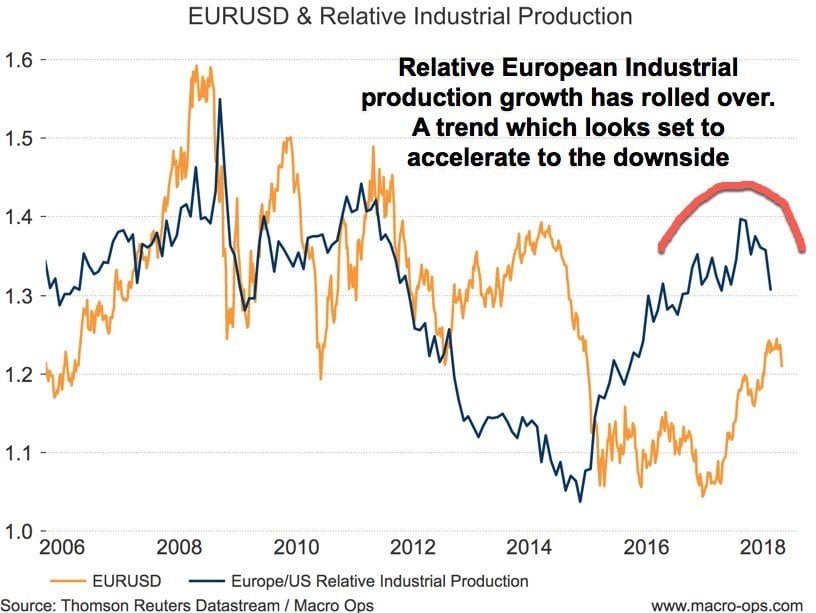 The improving relative US economic picture makes for more attractive return prospects in US markets as relative equity momentum picks up. This is driving speculative flows back to the core (the US) and these flows drive exchange rates. 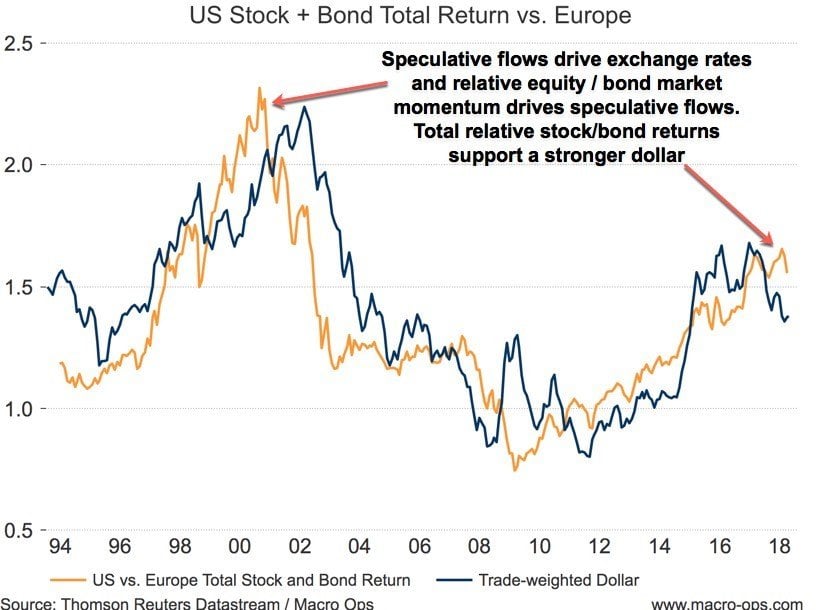 We can see this change in flows directly in the following chart from BofA. Foreign purchases of US equities relative to eurozone equities have recently picked up, and quite significantly so. 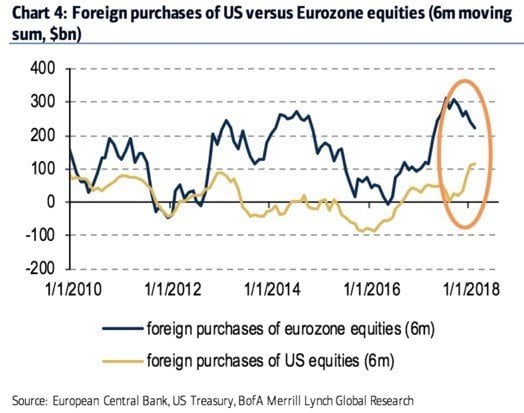 On a forward PE basis, the eurozone is now not much cheaper than the US. While at the same time, growth expectations have strongly diverged in favor of US companies. 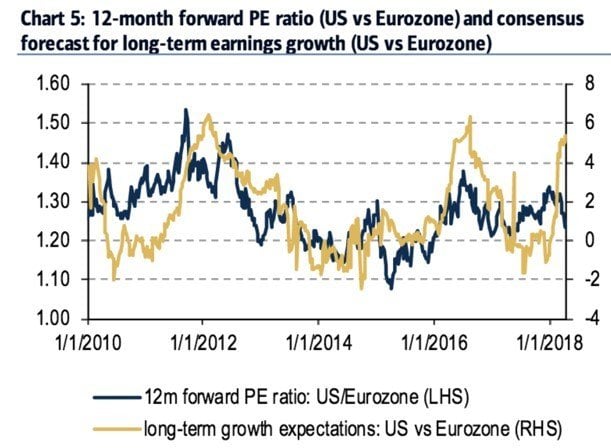 This dollar trend is going to affect everything from rates to commodities (think gold and oil) to EM stocks as well as specific US sectors. It’ll benefit some markets while hurting others….

There are a number of highly asymmetric trades to be made off this macro shift which we’ll be discussing in depth in our coming monthly Market Intelligence Report (MIR).

Market Wizard Ed Seykota once said that, “Fundamentals that you read about typically are useless as the market has already discounted the price, and I call them ‘funny-mentals’. However, if you catch on early, before others believe, then you might have valuable ‘surprise-a-mentals’.”

The market is positioned for a weakening dollar. Everyone knows that everyone knows that the dollar is in a bear market because: the widening deficits in the US, chaos in the White House, overvalued US stocks, the technical breakdown of the dollar bull trend, USD bull cycles only last 7 years etc… This is common knowledge and is now embedded in the price. Positioning shows that this narrative has become entrenched. The market, as always, has been extrapolating the past into the future. It hasn’t realized yet that the future has changed. It’s about to be in for a surprise…

If you want to stay on top of this incredibly important shift in the macro narrative, subscribe to the MIR by clicking the link below and scrolling to the bottom of the page:

There’s no risk to check it out. We have a 60-day money-back guarantee. If you don’t like what you see, and aren’t able to find good trades from it, then just shoot us an email and we’ll return your money right away.

If the US dollar maintains trend, a seismic shift will occur in the macro landscape. The greenback is the lynchpin macro asset that will affect every other asset class out there. Keeping tabs on this trend will be vital for any trader that wants to knock 2018 out of the park. By subscribing to the MIR you will have real-time monthly updates on this important trend.