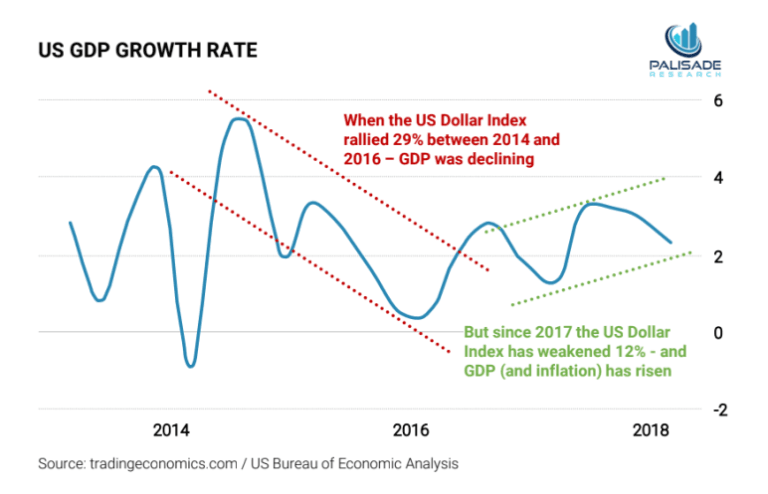 The U.S. Dollar has been on a tear over the last few weeks. And many mainstream pundits are calling for the renewal of a dollar bull market.

The gist is that perceptions drive reality – which in turn creates a feedback loop. Think about it as a self-fulfilling prophecy.

The perceptions you have make you act a certain way which change the fundamentals of things.

For example, if everyone thinks there will be inflation, they will sell their dollars and buy hard assets. Which in turn pushes commodity prices higher and yields higher – thereby creating the very inflation they’re worried about.

“Financial markets, far from accurately reflecting all the available knowledge, always provide a distorted view of reality. This is the principle of fallibility. The degree of distortion may vary from time to time. Sometimes it’s quite insignificant, at other times it’s quite pronounced…

Sometimes peoples perceptions lag reality – like when people think inflation is going to be worse then it really is and over-react.

More importantly – perceptions are fickle. The crowds view of things can change in a blink of an eye.

Reflexivity is known as a difficult theory – so don’t worry if it seems too much right now. The point is, peoples opinions can change their reality temporarily until they can’t justify it any longer.

And this happens often in markets since prices and valuations are all subjective – which means over-valuing and under-valuing is constant. . .

After watching the mainstream talk about the “revival of the U.S. Dollar bull-market” the last couple of weeks – I needed to write about this fallacy.

The perception of a rising dollar isn’t supported by reality – only misconception – and once the market realizes this, it will continue its downtrend to new mulit-year lows.

A weaker dollar is what President Trump has wanted since he took office.

He’s publicly bashed China and Europe and Japan for “cheating” by depreciating their currencies deliberately to steal growth from America.

Another way at looking at this is he wants their currencies to rise – which automatically means the Dollar must fall.

For instance, a weak Dollar means a strong Euro – and vice versa.

Weakening a currency is a tactic governments and Central Banks use to grow their economy at the expense of other nations. The other country then retaliates by weakening their own currency – this develops into what is a known as a currency war.

A weaker currency boosts a nations exports; which translates into economic growth. It also causes inflation – which in theory – should make consumers spend more rather than save.

I’ve written before about how a weak currency can boost GDP – you can read it here.

The U.S. Dollar just had one of its biggest rallies in decades.

Between 2014 -2016, the Dollar soared 29%. This was because the Fed finally ended QE3 (their last round of money printing) and began talking about raising interest rates. This was their tightening cycle.

During this time, U.S. economic growth was in a downtrend. Not too mention the Fed couldn’t get their ‘healthy’ 2% inflation.

Yet in this period, U.S. growth was in an uptrend and inflation finally eclipsed 2%. 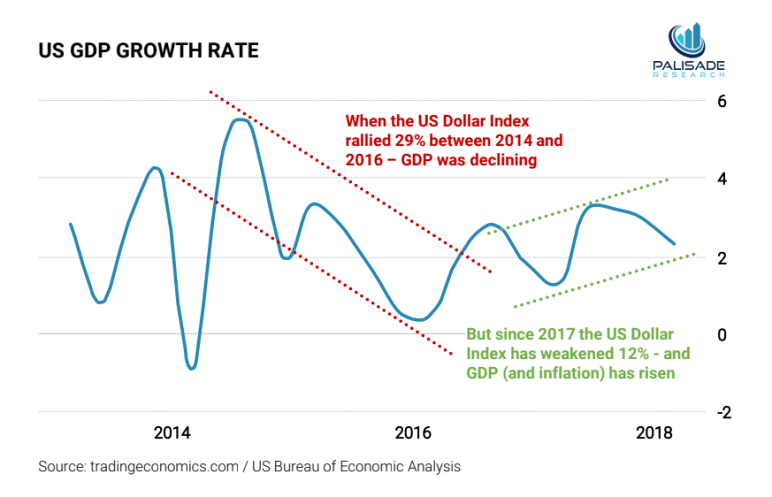 It’s about the harshest bear markets over the last 100 years. It’s insightful and interesting to see how things got that bad after being so good.

To put it simply, this guy knows bear markets.

He recently hypothesized that the U.S. Dollar will keep rallying higher. And this will trigger the next systemic banking crisis and lower growth.

A stronger dollar is also negative for global stocks. And emerging markets could ‘blow up’ because of their debt ballooning.

I agree with Napier on this – except that this reality won’t happen.

If there is any sign of slowing growth or a systemic banking crisis, the Fed will reverse their hawkish tone and (inevitably) restart their printing presses.

We can deduct from Trump’s words and by looking at the strengthening GDP that a weaker Dollar is what the U.S. really wants.

Once investors perceptions realize this reality – the Dollar bear market will resume.

And the Reflexivity feedback loop that recently lifted the dollar up will against it – all the way down. . .