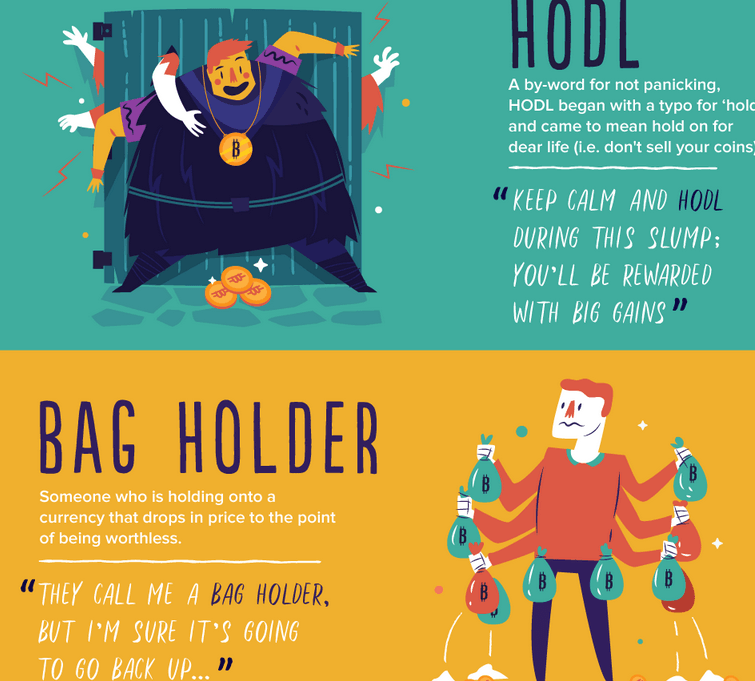 Over the past few months, cryptocurrency has entered the mainstream, and it’s here to stay – for a little while, at least.

It addition to the fragile economic ground on which it treads, bitcoin’s threat to the environment may compromise its short-term growth and long-term sustainability. But in the meantime, people are getting rich.

It is a shabby investor indeed who isn’t at least keeping an eye on the cryptocurrency ball; and that means learning the lingo. Luckily, the people at 99Bitcoins are all over it with their new illustrated glossary of cryptocurrency slang.

Whales – the sea-bound mammals – are pretty big, right? So that’s just what you get with the bitcoin Whale: one of the big guys or gals.

A Whale, in crypto argot, is someone who owns a big chunk of the total amount of a particular currency. Some say that means 5% or more. It’s good news for the Whale, most of the time, but us little fish have to take care – because if a Whale takes a dive, we all end up going down with him.

The top 100 bitcoin traders have something like 17% of the total bitcoin wealth between them, so if you’re one of those then you can consider yourself pretty darn close to Whaledom.

There’s an acronym for everything these days, and few moments in life more were embarrassing than when your mom asked your girlfriend if LMAO means ‘lick me all over’.

In the cryptocurrency universe, HODL is the dominant acronym. However, it is also founded on a misunderstanding: the phrase was apparently born when one investor tried to advise another to HOLD their coins (rather than sell them), but accidentally typed HODL.

That in fact makes it a backronym, since today it’s sometimes extended to read Hold On for Dear Life.

Have you been listening carefully? A Bag Holder is someone who HODLs when they should SODL (sell for dear life).

Imagine you keep all your cryptocurrency in a bag. And then it loses all value, everyone around you is selling, and you move too slow. Suddenly you’re the one left holding the bag.

Bag holder is a term used for any type of investment, but  with crypto perhaps Bag Hodler would make the meaning clearer.

Fear. Uncertainty. Doubt. Every (sane) investor retains an element of these. But when transformed into an acronym, FUD means a more specific kind of fear – the ungrounded fear of a bust that spreads in the media from time to time for varying reasons.

Dopey traders buy into the FUD rumors and sell their coin when they really shouldn’t. Smarter investors are the ones buying it, hip to the fact that its value will actually increase after this temporary dip. Sometimes the difference between being smart and dopey is a matter of luck.

Rekt is a relatively ancient slang word among the neologisms and repurposing of much of the cryptocurrency vernacular.

In fact, it derives from the gaming universe, particularly the online and MMO variety, since it’s essentially a keyboard-friendly shortening of how you and I would spell “wrecked”.

It’s not 100% compatible with the terms we’ve already covered. If a Whale loses all their money down to a collapse, are they wrecked? Ships get rekt, not Whales. Still, if it happens to you, you probably won’t be quibbling over the semantic logic of the affair.

Crypto investors are all childish dreamers at heart. A key reason they invest in cryptocurrency instead of/in addition to the regular markets is that cryptocurrency sounds cool and space agey.

If you walk past a playground and you hear the kids joyfully yelling ‘To the moon! To the moon!’ then it’s time to rejoice, since those young hopefuls are likely start-up brats who’ve spotted their beloved coin of choice is in the ascendant. The phrase is a cry of encouragement for the rising value to indeed climb as high as the moon, and make everybody filthy rich.

We have to skip ahead a bit, now. There’s no room here for a full visual on what a cryptocurrency Bear is, so you’ll just have to accept that a Bear is a trader who, due to FUD or otherwise, has decided that HODLing is a pretty bad idea and it’s time to sell up lest they become a Bag Holder.

The twist with the BearWhale is – you got it – that it’s a Bear who’s also a Whale. Terrifying, no? It certainly is for other traders, because when a Whale decides to dump all their currency it’s going to create huge, dangerous waves for the whole market.

Luckily, only one BearWhale has been spotted in the wild – offloading 30,000 Slovenian Bitstamps in 2014. The market fought back, a victory that has been celebrated in artwork and poetry in honor of the great BearWhale slaying.

Not to confused with vaporwave or Tupperware, one of which is a super-trendy music genre that gives and gives, and the other a plastic box that will keep your food fresh for days.

Vaporware, on the other hand, is a derogatory term for coins that are all mouth and no trousers – a currency that has been over-hyped and is due to divebomb.

This one’s a delightfully old-fashioned slang word that’s been re-imagined to fit the 21st shysters of the cyberpunk age.

Simply, a shill is someone who gives you cryptocurrency advice, but is actually just doing it for their own good – to raise the value of the coin they own. Don’t listen to’em!

Okay. Now you’ve learned the lingo you’re ready to hit those virtual streets and fit in like a native.