ValueWalk
Home Economics Rate hikes might invert the yield curve in the next 12 months,... 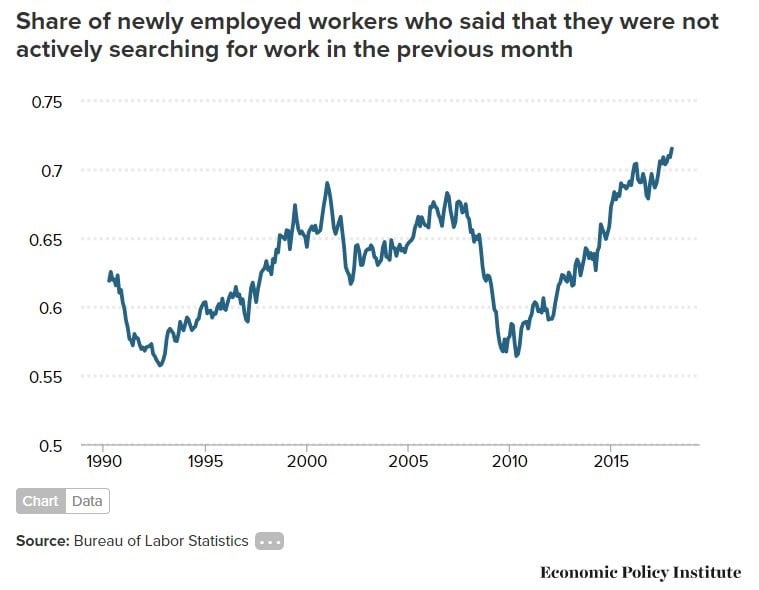 One of the biggest stories in finance and economics in 2018 is the flattening yield curve. It has been flattening for a few years, but now it is coming close to an inversion as we have detailed previously. The latest difference between the 10 year treasury yield and the 2 year treasury yield is only 47 basis points. Stocks do fine when it is in its flattening period. If you are interested in finding out what performs best during an inverted yield curve, click here. Recessions usually occur when the curve starts to steepen after the inversion. The flattening in 2018 is occurring because economic growth has been stalling out while the Fed planes to hike rates 3 or 4 times even as the core PCE growth is only 1.6%, which is below the goal of 2% inflation.

The Fed is raising rates despite core PCE being below the target because it is afraid of a recession occurring while the Fed funds rate is low and because it thinks inflation is coming soon because of the tightening labor market. As you can see from the tweet below, the San Francisco Fed President thought the labor market was very near full employment in March 2015.

Three years later since the statement and the labor market still hasn’t gotten to full employment. That was a big mistake because he didn’t factor in the workers who left the labor force and are now re-entering it. If you look at the unemployment rate, which is at 4.1%, and the jobless claims which is at 215,000, it looks like the unemployment is low enough to spark price inflation. However, these measurements are missing the millions of workers who left the labor force in 2008 and are now re-entering. The jobless claims reports are a bit ridiculous in the sense that they show the labor market is impossibly tight even though it still has some more slack.

The latest jobless claims report is the lowest since 1973. In 1973, the labor force was 87 million and in 2018 it is 162 million. The claims to labor force ratio blow away the record low. The chart below explains why this is happening.

Workers Are Coming Off The Sidelines

The percentage of workers who said they were actively looking for work a month ago and just became newly employed is the highest since at least 1990. Firms would rather hire workers with no experience in years and train them on the job instead of hiring qualified workers at a higher pay.

Some argue that anytime the Fed flattens the yield curve with rate hikes it is making a mistake because it is bringing a recession closer. We won’t go that far, but we will say when the Fed hikes rates at the end of the cycle and inverts the curve it is probably a mistake. The rate hikes in 2018 or 2019 will probably invert the curve. Following an inversion, when the Fed hikes rates in this period, it is deciding that a recession would be better than heightened inflation. Previously we discussed the likelihood of the Fed allowing inflation to run beyond the stated 2% target for longer. Inverting the curve with low inflation like we have now would be an unforced error. The Fed shouldn’t cause a recession by hiking rates based on the same argument which has been wrong for 3 years,

Fed officials have been mostly coy about the yield curve because they want to raise rates and get the Fed funds rate out of the ZIRP hole. They have been correct in the past few years in saying that the flattening isn’t a problem, but it soon will be. If current guidance becomes more hawkish, the Fed could invert the curve.

Recently, some Fed officials have woken up to the problem as we knew they would. Essentially, this is like a failing student who realizes if he doesn’t pass the final exam, he will fail the class. It’s too late to learn the material for the whole year a week before the exam. It’s also getting late in the cycle to worry about the yield curve when the Fed just raised its guidance for rate hikes in 2019 and 2020. Philly Fed President, Harker, recently said the Fed will slow its hike pace if the curve doesn’t steepen. However, in the same speech, he raised his target to 3 hikes in 2018 and expects 3 hikes in 2019. To continue the analogy, this is like the student saying he wants to pass the final exam, but playing video games instead of studying.

Some think the Fed will follow in the footsteps of the Bank of Japan and try yield curve targeting in the next business cycle. That is when the central bank attempts to keep the yield curve from inverting. A steep curve helps the banks and keeps them lending. The latest Japanese yield curve is flat but (relatively) normal as the 2 year yield is at -0.14% and the 10 year yield is at 0.04%. It’s tough to know what the yield curve would be without any central bank intervention. Either way, this policy along with the Japanese central bank buying ETFs hasn’t been a panacea as the Japanese economy has seen stable low growth partially because of a declining population.

Japanese GDP Growth Has Been Low Despite Extreme Monetary Stimulus

Since the Fed thinks there will be improved growth and inflation in 2018, it will raise rates 2-4 times in 2018. The rate hikes might invert the yield curve in the next 12 months, sparking recession fears. If the Fed does this while the core PCE is near 2%, it is committing an unforced error. As individual investors, we don’t control policy; we can only anticipate and react to it. Therefore, keep this in mind while you decide on your risk allocation. Ultimately, these rate hikes mean the intermediate term economic outlook is getting gloomier by the day.