In the past few weeks we have reported on the economic weakness in Europe. The Citi Economic Surprise index for Europe is extremely negative showing reports are missing economists’ expectations. The ECB’s Mario Draghi responded to this recent weakness by stating growth may have peaked for the cycle. This is a reasonable assessment, but it’s more than an economic forecast. Every statement by central bankers has monetary policy implications. This could mean more dovish policy. This is an interesting predicament because the ECB has interest rates in the negatives and QE hasn’t even ended yet. The ECB will wait until July to decide the fate of QE.

Policy is still extremely dovish with the goal of normalization in the next few years. Peak growth at the beginning of this process is a disaster. The biggest problem is normalization has gone too slow. It would be interesting to see what policy would be put in place if Europe were to fall into a recession in 2019. Clearly, the US is in much better shape as the Fed has raised rates to 1.69% and started unwinding its balance sheet, all while the the US economy is stronger than Europe’s economy. These factors could be bullish for the dollar versus the euro.

The stock market is acting very unusually because the S&P 500 has been range bound while the earnings growth in Q1 is in the high teens as we mentioned in Are Markets Priced For Perfection?. Even though much of these gains were already priced in as investors have expected the tax cut to help earnings for a while, the blended sales growth of 7.6% normally would be good enough to push up stocks. The best answer for why stocks haven’t done well is disappointing economic growth and a hawkish Fed. Economic growth will be positive, but it will decelerate which is a problem. The real GDP growth was 2.9% in Q4 2017 and the consensus estimate for Q1 growth is 2%.

The rise in commodities prices and the expectation that accelerated wage growth is coming based on the employment market filling up has boosted inflation. The 10 year breakeven inflation rate hit 2.17% on April 19th which is the highest point since September 2014. This explains why the 10 year bond yield hit 2.96% which is the highest level since December 2013. It’s about to hit the psychologically important 3% level which is hurting stocks with high dividend yields which are owned for the income they generate investors. However, psychology aside, as we have pointed out previously in The Most Important Chart In Macroeconomics, rates may need to rise more in order to adversely affect stocks.

The chart below shows the recent increases in expected rate hikes for 2018, with the probability of 3 rate hikes at 46% and the chance of 4 or more hikes at 33.6%. 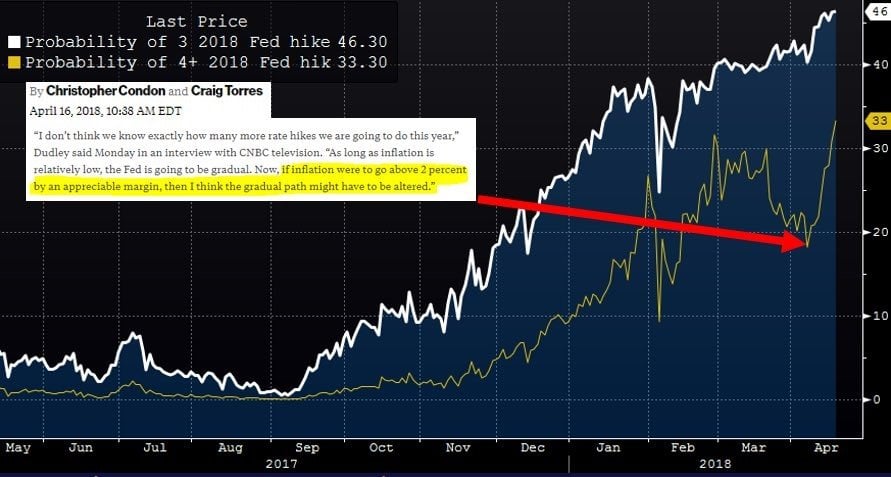 The interesting part about this is NY Fed President Bill Dudley stated on April 16th that the market understands that more than 4 rate hikes is quite unlikely. The market has moved to expecting more hikes since then. That was the exact near term bottom in the odds shown by the arrow. The quote shown above is another one by Dudley where he states the gradual path of rate hikes would need to be altered if inflation were to get above 2%. We don’t think that comment sent the Fed fund futures higher. Instead, we think the data points have moved inflation estimates up which means more rate hikes. The market is controlling Fed policy.

Inflation Causing The Fed To Be More Hawkish

These additional rate hikes are far from a certainty, but stocks are pricing in the increased odds of them occurring. The Philly Fed prices paid index hit its highest reading in 7 years and the prices received index hit the highest reading in 10 years in April. One cause of the increase in these indexes is higher prices in metals due to the tariffs. Aluminum was up about 25% in the first half of April.

The chart below puts a damper on getting extremely excited about inflation because it shows the price paid index in the regional Fed reports have an 86% correlation with energy prices. To be fair, energy is an important aspect of headline inflation. However, food and energy are excluded from the core PCE reading which the Fed uses to set policy. The core PCE for February was 1.6%. 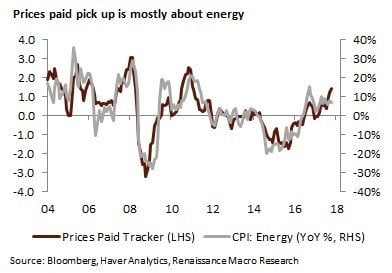 The next core PCE report is on April 30th. Based on the general increase in prices seen in most reports such as the CPI, it seems reasonable to expect the core PCE to increase, but stay below the 2% level. The core CPI went from 1.86% to 2.11% in March. A 0.25% improvement in the core PCE would bring it to 1.85%. This is probably the most important report facing the market in the next few weeks. If the report beats expectations, which will probably be near 1.8%, the number of rate hikes will go up and most stocks besides materials and energy will fall. The dividend stocks will fall in particular. The consumer staples sector is already at its 52 week low; higher inflation will make the performance worse. The long bond will sell off further, sending the 10 year bond yield above 3%. The reverse will occur if the core PCE report misses estimates.

The chart below shows the GDP weighted interest rates for advanced economies. 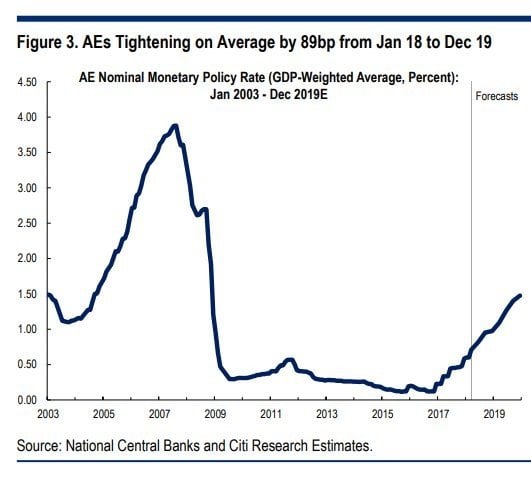 The average tightening is expected to be 89 basis points from January 2018 to December 2019. Europe will be below that as there won’t even be any rate hikes in 2018. America will be way above the average as the Fed should raise rates 75 basis points in 2018 and 50 basis points in 2019 at the minimum. It’s unlikely that the advanced economies will see rates that meet the previous cycle peak of about 4%.

Europe might be slipping backwards despite the crisis era monetary policy still being in place, while the US economy is in better shape and inflation is higher. Inflation could be a problem in the next few months which will increase the number of rate hikes and hurt stocks. The Fed could invert the yield curve if it raises rates too fast. There have been many increases in inflation this cycle without the feared runaway inflation. In fact, the core PCE was 2.1% in March 2012, yet the Fed didn’t raise rates. The Fed shouldn’t get too afraid of inflation being above 2% because it doesn’t mean it will get out of control.