ValueWalk
Home Info-Graphs The Impact Of Climate Change By State: FL Beats Out Both TX... 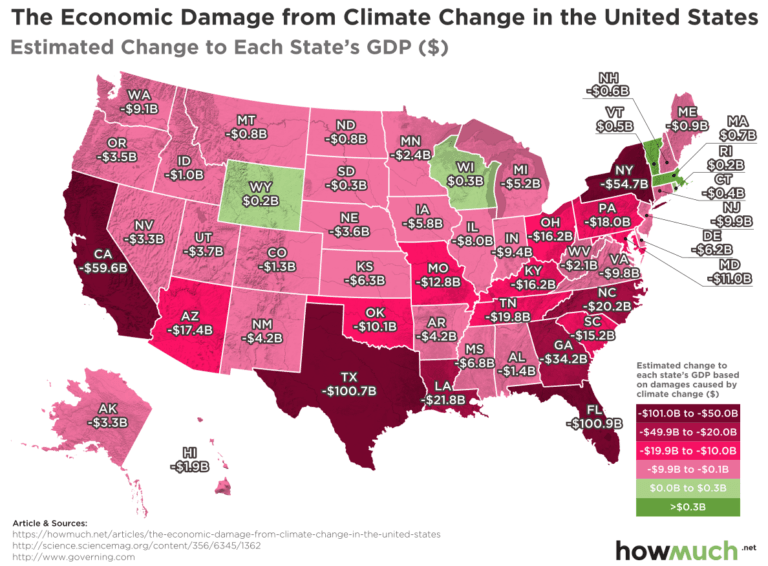 Climate change is a hot-button issue. Liberal news outlets worry about the planet becoming uninhabitable for humans, but conservative stations highlight any debate whatsoever in the scientific community as proof that things might not be so bad. For the sake of argument, let’s assume climate change is real. How might it affect the economy in the state where you live?

We found our data for how climate change would impact state GDP levels from a study published in the journal Science, which proposed a new model for calculating the economic impact of climate change. Researchers considered a range of different factors, like expected changes in agricultural yields, different demands for electrical use, changes in mortality rates, changes to the labor supply, damage due to a rise in sea levels and storm surges, and changes in crime rates. Basically, it’s an incredibly detailed and sophisticated model. We summarized the GDP data for each state to create a new color-coded map, revealing extreme disparities in how researchers anticipate climate change will affect different states.

The states poised to suffer the most damage due to climate change tend to have large cities located on the coasts. Florida and Texas both readily come to mind and in fact they top the list at more than $100B each in predicted losses due to impacts of climate change. Hurricanes and storm surges have already devastated multiple large cities in both states over the past several years. Houston is still rebuilding from the most recent flood and Tampa Bay barely dodged what could have been absolute devastation last fall during Hurricane Irma. California comes in a distant third place at $59.6B, followed by New York at $54.7B and Georgia at $34.2B.

Top 10 States with the Most Economic Damage From Climate Change

The map demonstrates a clear pattern: states on the coasts, especially in the South and Southeast, stand to lose the most as a result of climate change. Nevertheless, looking at the middle of the country,many non-coastal states will also suffer billions of dollars in damage due to climate change. It is easier to think about how warmer ocean temperatures can increase the power of hurricanes, but it can be much more difficult to understand how drought and wildfires are directly connected to climate change. Even though these midwestern states won’t have to contend with rising sea levels, they will still experience significant costs related to climate change. A couple of the states we mentioned above, for example, experience tornadoes every year and, as rising ocean temperatures will almost certainly increase their frequency and intensity, it makes sense that they will have a greater probability of hitting a major urban center. The common myth persists but it is simply not true that tornadoes “can’t” hit big cities.

All that being said, on a macro level states in the middle and western interior of the U.S. stand to lose relatively little compared to coastal areas. The major exceptions to this rule are Rhode Island ($0.2B), Vermont ($0.5B), New Hampshire ($0.6B) and Massachusetts ($0.7B). The fact that Massachusetts will be relatively unaffected is particularly remarkable, considering that Boston is located on a major harbor. Wisconsin ($0.3B) stands out as the third least impacted, thanks in large part to the Great Lakes (where there’s a near infinite amount of freshwater). The lucky residents of Wyoming and Rhode Island will be glad to know that they can be the least-concerned about climate change from an economic perspective—it bears mentioning, of course, that these are also the least-populated and physically smallest states in the country, respectively.

Climate Change Could Erase 45% Of Your Portfolio By 2020

There is one key assumption that has to be addressed before closing our analysis, however. Long-term predictions about GDP necessarily include several leaps of faith. For example, that productivity growth will continue at its current rate and that breakthrough technologies won’t dramatically change the economy. Suppose it was 1918 instead of 2018; imagine trying to predict the macroeconomic effect of climate change by the end of the century! The country went through a second World War, tons of families bought cars, moved to the suburbs, got air conditioning, Rock & Roll, the Internet—in short, the entire economy went through several enormous transformations during the past century. Do you think the economy will adapt to climate change, or will it just shrink to the challenge?

All that being said, California experienced literally the largest ever recorded in the state in the months after this data became public. Was that just a coincidence?