Spruce Point Capital Management is pleased to announce it has released the contents of a unique research report on Globant SA (NYSE: GLOB) (“Globant” or “the Company”).

Spruce Point has conducted a critical forensic and fundamental analysis of the Company. In our opinion, the current management is misportraying the organic revenue growth inherent in its technology outsourcing business. By leading investors to believe that it is achieving consistent 20% p.a. organic revenue growth, GLOB’s shares command an industry leading valuation. We estimate this has allowed insiders to quietly dispose or transfer of $80m in shares via an unusual dual-listing share structure in the US and Luxembourg. Spruce Point believes that GLOB’s organic growth rate has in fact been decelerating, and is now below target. We find evidence to suggest that management is growing dependent on accounting and financial presentation gimmicks to embellish a business that has generated negative cumulative free cash flow since coming public.

Spruce Point also believes the recent news that WPP’s CEO Martin Sorrell is under investigation for possible misuse of assets and allegations of improper behavior are a potential overhang for GLOB’s share price. WPP is GLOB’s largest shareholder (~20%), Mr Sorrell is a member of Globant’s Board of Advisors, and WPP represents $6m+ of related-party revenue for Globant.

As a result of our investigative analysis, we have issued a "Strong Sell" opinion, and a long-term price target of approximately $24.50 to $29.50 per share, or approximately 40% - 50% downside risk.

Globant SA (NYSE / LUX: GLOB) is a poorly organized roll-up of digital IT outsourcing companies. GLOB receives the highest valuation in its sector by convincing investors it achieves consistent 20% p.a. organic sales growth. However, our forensic analysis disproves management’s bold claims, and suggests that its growth is in fact rapidly decelerating below target. Once investors realize GLOB uses aggressive accounting and financial presentation methods to paper over a cash degenerative business, while insiders quietly unload millions of dollars in stock, we expect shares to be materially re-rated lower by 40% to 50%.

Organic Revenue Growth Is Slowing: Globant has “optically” achieved the fastest top line revenue growth within its peer group posting revenue growth of 27.1%, 27.2%, and 28.1% in 2015, 2016, and 2017, respectively. This top line growth has led investors to award Globant the highest multiple in its peer group. Globant's management team consistently touts that its organic exceeds 20%. Management goes out of its way to avoid quantifying the attribution from M&A in discussing its revenue growth. In Globant’s year over year "results of operations" discussion filed in its Form 20Fs, there is not a single mention or attribution to M&A when it discusses the drivers of revenue growth year over year. Our work uncovers a slowing organic growth profile versus the robust top line growth story that Globant portrays. In 2017, we estimate that almost half (>47%) of Globant's growth in 2017 was from acquisitions.

Cash Flow And Adjusted Earnings Metrics Reported By Globant Are Potentially Deceptive: We warn investors not to rely on Adjusted EBITDA as a cash flow proxy. Globant’s bulls will point to a growing upward trajectory in Adjusted EPS and EBITDA. We caution investors to be skeptical, since Globant’s Adjusted EBITDA of $64.6m in 2016 translated into a paltry $7.4m of free cash flow. Globant does not even provide investors regular cash flow statement reporting. Globant does not appear to generate recurring cash flow from outsourcing technology services. Rather, it generates cash from trading investment securities. Globant regularly trades securities and its stellar track record has generated a cumulative $68m of cash flow in the period from 2011 to 2016. In regards to earnings, we have provided an adjusted income statement based on Globant’s core business of outsourcing IT and software solutions. We arrive at EPS results that are on average 36% lower since 2013 than the Adjusted EPS that Globant reports. Recent 2017 IFRS results declined 15% YoY, and didn’t grow at all based on our normalized Adjusted EPS calculations.

Evidence of Accounting Games: Globant lacks consistency with adjustments and add-backs, and even tries to convince investors to ignore depreciation and amortization expense when presenting its adjusted results. We have found instances where the same category of expenses are not treated uniformly in its reconciliation of Adjusted Net Income; Globant makes the adjustment when it is favorable to add back the one-time item and ignores the adjustment when it is unfavorable. There is also a pattern where Globant continuously revises IFRS or adjusted numbers. The 2016 financials have been published three times (4Q16 press release, FY16 20F, and the 4Q17 press release) and we identify changes in each subsequent release. We also found potential evidence of manipulation in quarterly earnings to meet consensus expectations. Globant’s 4Q16 Adjusted EPS was originally reported within its guidance and matched consensus expectations of $0.31 When 4Q17 was reported on 2/15/18, we found that its 4Q16 Adjusted EPS was subsequently revised to $0.27 which would have represented a $0.04 miss versus consensus.

Corporate Strategy Initiatives Are Not Showing Signs of Progress: In 2016, Globant introduced a new company wide model called 50-Squared. The main goal of 50-squared is to focus Globant's team on the top 50 highest potential accounts that have the capacity to grow exponentially over time. We took a close look at its top 5 clients. Four of its top clients (excluding its top client, Disney) only grew by an average of 2% in 2017. We don’t see evidence that this strategy is gaining acceptance with its most important clients.

Insiders Selling Is Staggering: Insiders have sold (or transferred) over 70% (+$80m) of shares since Globant’s IPO in July of 2014. We think investors may be unaware of the magnitude of selling by Globant’s founders and other insiders. Globant’s status as a foreign private issuer allows it an exemption from reporting the customary insider disclosure via Form 4s to the SEC. Globant chooses to file paper forms with the SEC via Form 144s. Ironically, since the Luxembourg dual listing in August of 2016, Globant now files insider selling transactions electronically with the Luxembourg stock exchange. We find it peculiar that Globant now files insider selling transactions electronically with the Luxembourg exchange and does not follow that same protocol with the SEC. Further, the four founders all set up both revocable and irrevocable trusts. All four founders in aggregate transferred over 3.0m shares (~$40m and ~10.4% of total share count) to irrevocable trusts at some point between August 2014 and January 2015. We believe that this transfer was done quietly with the potential motivation to allow for further insider selling

Corporate Governance Should Be Questioned: Globant has not maintained an independent board since its IPO. Given Globant's status as a foreign private issuer, it is able to adhere to different corporate governance standards. Globant has chosen home country status of Luxembourg, and must adhere to its corporate laws. There is no legal requirement under Luxembourg law to have a majority of independent directors. Although, Globant states that its board is "currently" independent. We analyzed the board independence over the last three years since its IPO. The Board was not independent at the time of its IPO. Furthermore, in both 2016 and 2017, the majority "independent" status was achieved by a single board member, Francisco Alvarez-Demalde (founder of Riverwood). Mr. Demalde at the time of its IPO represented Globant’s second largest shareholder (Riverwood). Although, this former major shareholder may not need a "cooling off" period to be considered independent, we question why Globant would choose to achieve an independent Board in this manner. Also, its latest addition to the board, Linda Rotternburg (Endeavor), was also a pre and post IPO shareholder.

Analysts See 10% Upside, A Terrible Risk/Reward Given Our 40% - 50% Downside Estimate: GLOB is trading at peak valuation on the belief that it can maintain 20%+ organic revenue growth. Management continues to embrace the “organic” growth story while not sharing with investors the underlying contributors to growth that would reveal its slowing profile. GLOB does not lead its peer group in any key metrics that warrant its industry leading valuation (e.g. organic growth, EBITDA margin, FCF conversion, employee retention, or client diversification). Yet, the Street is valuing GLOB at 3.4x, 19.7x and 31.0x 2018E sales, EBITDA, P/E, respectively. Furthermore, analysts ignore obvious accounting and financial presentation issues that would give any prudent investor pause for concern. Once investors realize that GLOB’s organic growth rate is slowing, we believe investors will recalibrate GLOB’s valuation in-line with industry peers. Our simple regression analysis linking valuation to organic growth  rate among IT outsourcing peers suggests 40% to 50% downside (approximately $24.50 to $29.50 per share)

Globant’s Largest Shareholder Is WPP, A Company Under Pressure And Its CEO Are Under Investigation:

Globant is trading at peak valuation on the inflated belief that its growth mainly stems from organic initiatives. Further, management continues to embrace the “organic” growth story while not sharing with investors the underlying contributors to growth

Globant consistently tells investors that most of its growth is organic (vs. from M&A). We have done the work to prove otherwise. M&A represented approximately 50% of its total growth in 2017. More alarming: organic growth is decelerating 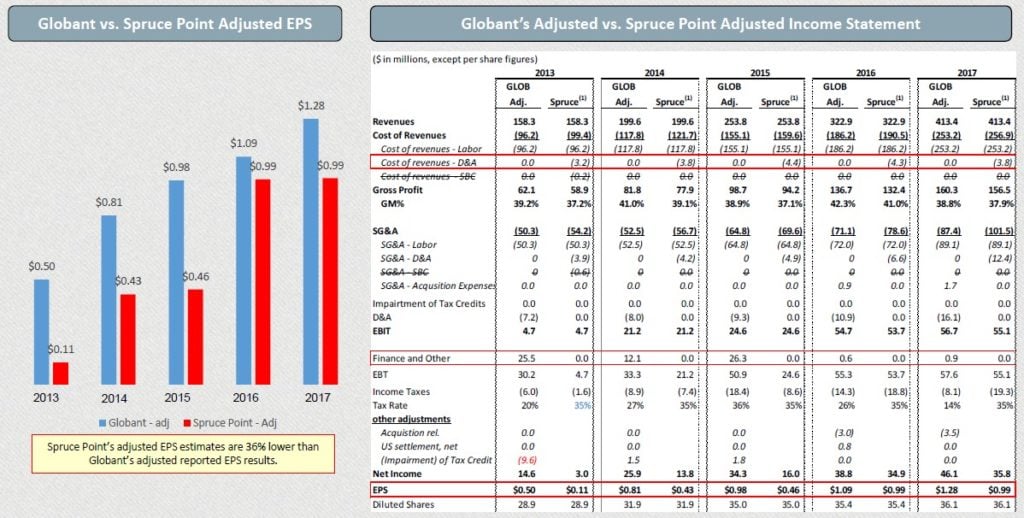 Cash Flows Are Not What They Appear. Globant Has Generated $68m of Cash Flow From Investing

Globant has yet to illustrate that its operations can generate any meaningful free cash flow, but Globant is generating cash by trading stocks and bonds 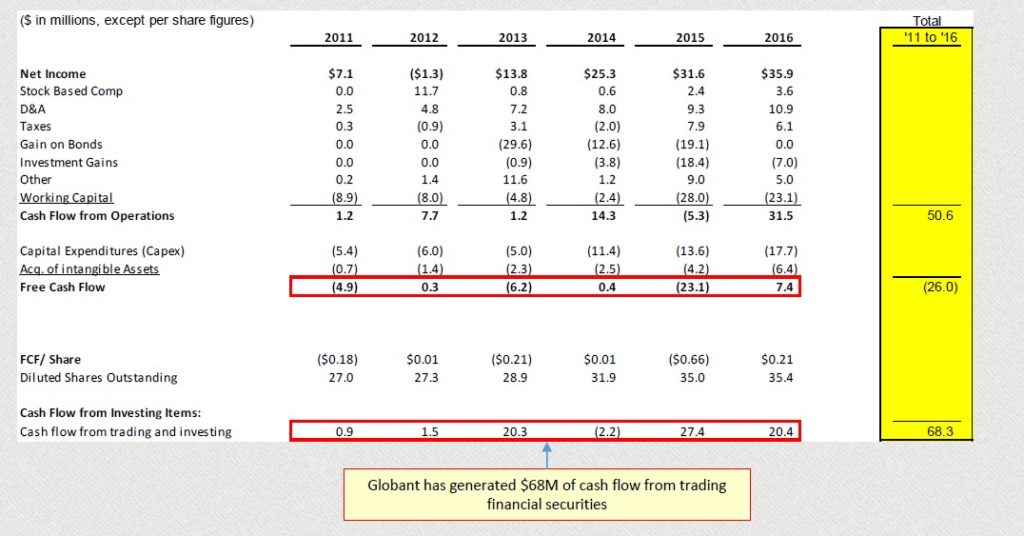