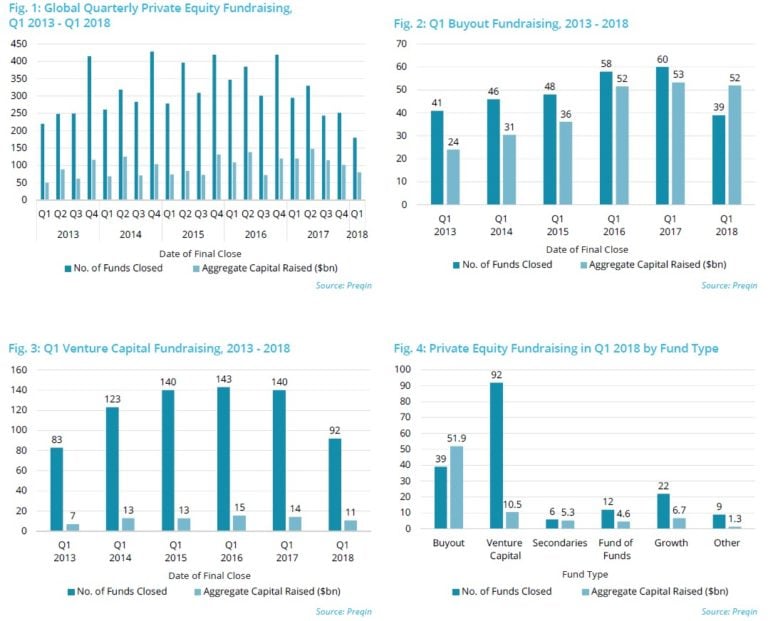 In Q1 2018, 180 private equity funds reached a final close, collectively securing $80bn in capital commitments (Fig. 1). Fundraising has slowed in comparison to the previous quarter, when 252 funds raised $102bn. In fact, Q1 2018 saw the smallest amount of capital raised in the first quarter of any year since 2015, when $74bn in aggregate capital was secured by 279 vehicles.

Both buyout and venture capital totals have experienced similar declines when looking at Q1 fundraising over the past six years: 39 buyout funds reached a final close in Q1 2018, representing a five-year low (Fig. 2). Yet the $52bn in buyout capital is on par with both Q1 2017 and Q1 2016 levels and well above the $39bn five-year historical average (2013-2017). 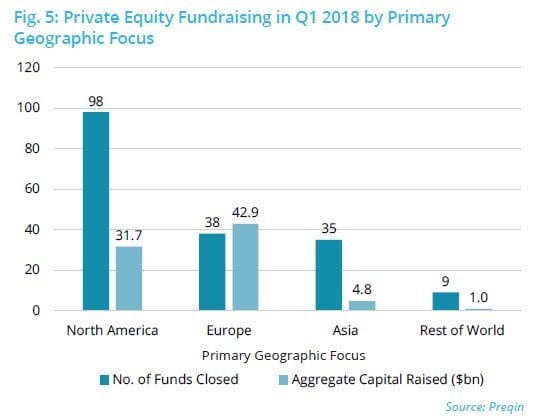 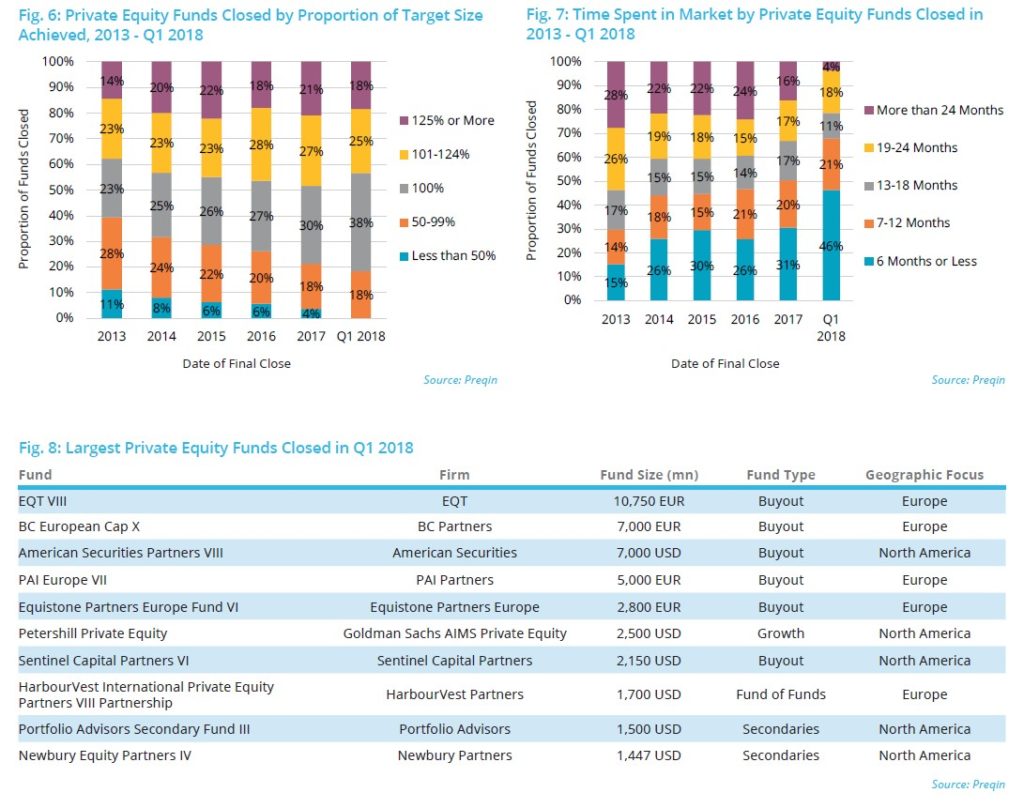 The number of private equity funds in market has continued to grow: a record 2,575 funds are on the road as at the start of Q2 2018, targeting $844bn in institutional capital (Fig. 9). This represents a 35% rise in the number of funds raising capital compared to the beginning of Q2 2017, and a 33% ($209bn) increase in aggregate capital sought. 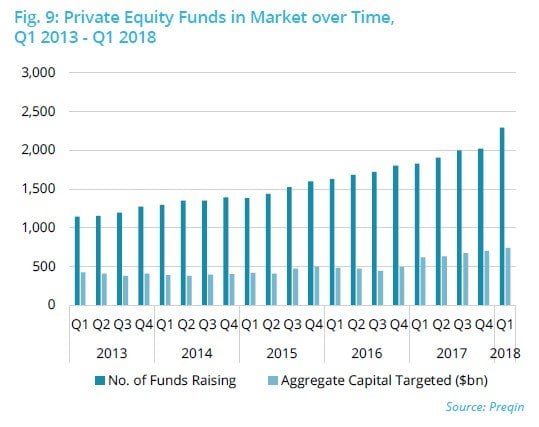 The increase in targeted capital can partly be attributed to the growing number of funds seeking larger commitments than in previous quarters, including SoftBank Vision Fund, managed by SB Investment Advisers, which alone is targeting $100bn – the largest amount ever targeted by a private equity fund. The fund had achieved 93% of its target size by its first close in May 2017.

Nearly half (45%) of all funds in market are targeting investment opportunities in North America, with these vehicles accounting for $337bn (40%) of all institutional capital sought (Fig. 10). The number of Asia-focused funds in market has increased from 343 in Q1 2017 to 509 in Q1 2018, with the aggregate capital targeted up 94%. 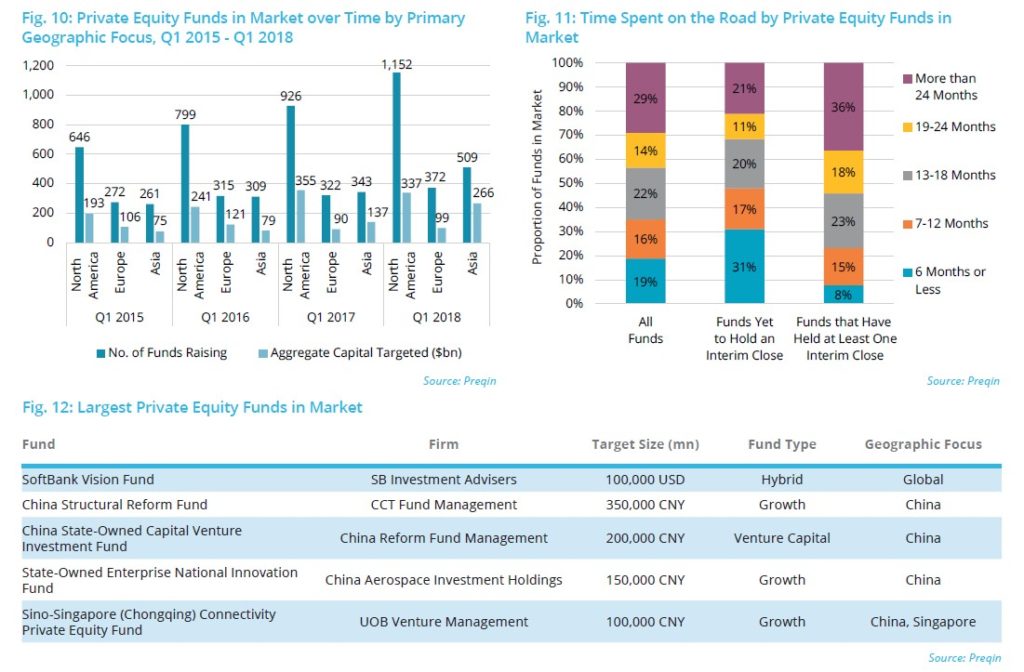 Buyout, venture capital and growth remain the most targeted private equity strategies among institutional investors in Q1 2018, as seen in Fig. 13. Moreover, in Q1 2018, a greater proportion of investors with active mandates searched for these strategies than in previous years, while investor appetite for funds of funds and turnaround vehicles has declined to 13% and 8% respectively.

The majority (51%) of institutional investors are planning to target Europe in the coming year, followed closely by North America (49%) and global-focused funds (48%, Fig. 14). Asia-Pacific has seen the largest year-on-year increase in appetite, with 28% of investors targeting the region in Q1 2018 compared to 15% in Q1 2017. While all single markets witnessed increased investor appetite in Q1 2018, fewer investors are targeting global-focused opportunities than one year ago. 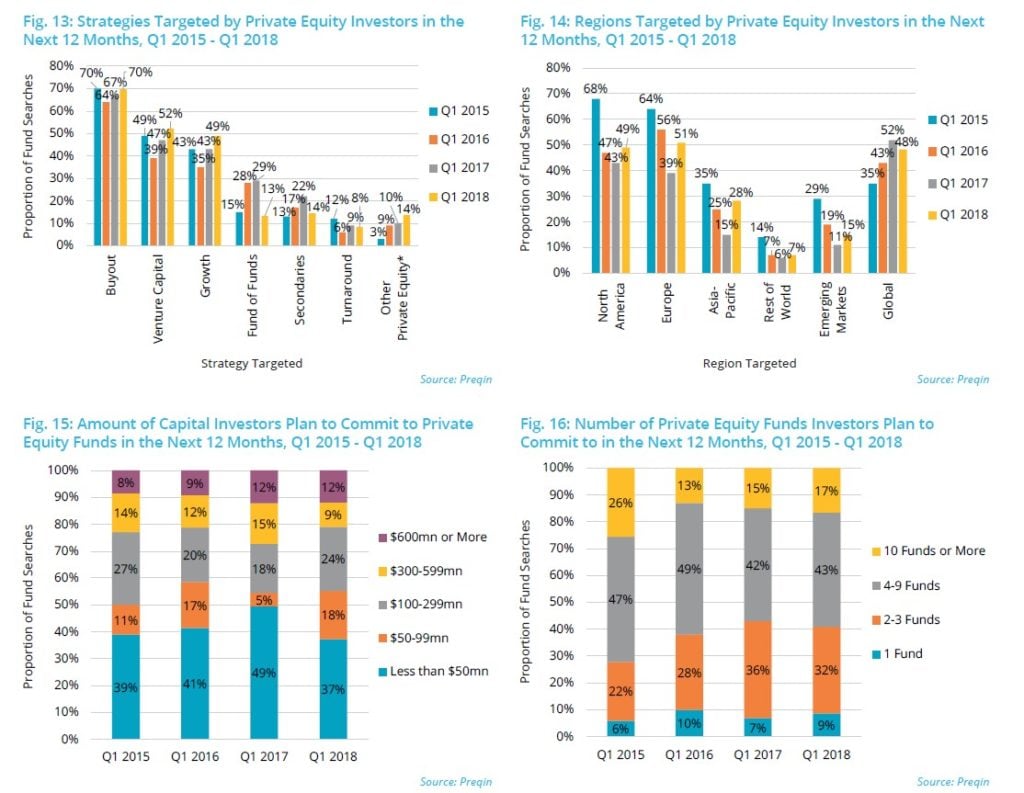