ValueWalk
Home Science By 2050 There Will Be More Pounds Of Plastic In Oceans Than... 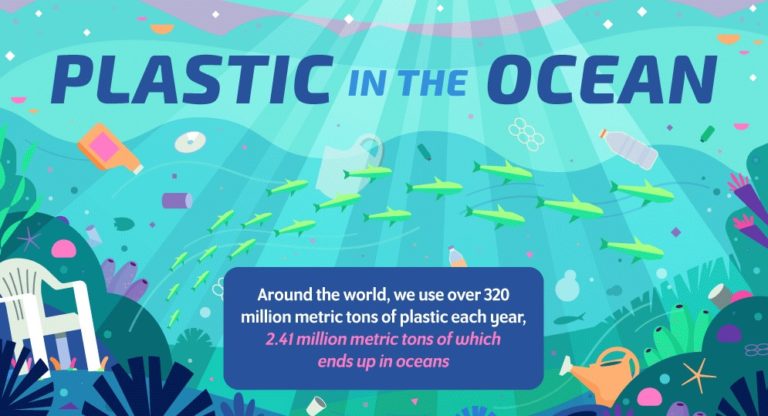 By the year 2050 there will be more pounds of plastic in the ocean than there will be fish. But since we don’t live in the ocean why should we care? It’s actually pretty simple – the fish we eat comes from the ocean, and that fish is filled with plastic and many marine animals are dying from starvation because they are ingesting all that plastic. Even the microplastic is making its way up the food chain with dire consequences. But what’s more, we can’t even begin to clean it all up until we stop letting it get there to begin with. The oceans are too deep to dredge and microplastic is too small to get it all. Where do we even begin?

Every year around the world humans use 320 million metric tons of plastic, and 2.41 million metric tons of that plastic ends up in the world’s oceans. The Great Pacific Garbage Patch was first reported in 1997, but it’s not the only one. While that particular ocean garbage patch is twice the size of Texas, there are also four additional major ocean garbage patches where cast off debris is collected by ocean currents. It doesn’t just stay floating on the top, either. That plastic is broken down by sunlight, heat, oxidation, mechanical action, and bacteria where it becomes microplastics that can be more easily ingested by filter feeders.

All that plastic is killing marine life at an alarming rate. In 2017 in Norway a 2 ton whale was euthanized after beaching repeatedly. A post-mortem necropsy analysis revealed the animal’s stomach was full of plastic and that it was unable to get sustenance from food because of all the plastic.

All the plastic floating in the ocean is also preventing sunlight from getting to plankton and algae, which is causing them to die off in many places. With no plankton and algae the animals that eat those things to survive will soon begin to starve, which will work its way up the food chain and lead to a deleterious effect on all populations of animals, eventually including humans. Already microplastics are being detected in the fish we eat, and the problem is only going to continue to worsen unless we take drastic action.

Doing away with single use plastics is the first radical and necessary step. Learn more about the serious problem of plastic in the oceans from this infographic.