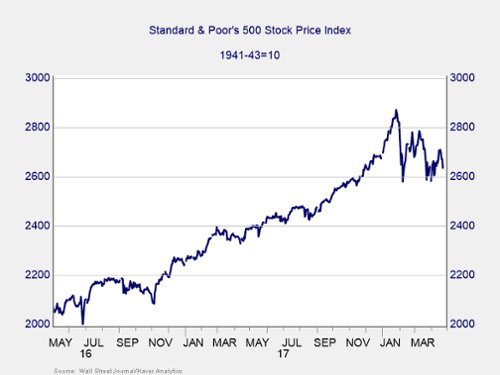 Yesterday, we had another breakdown in the stock market. Major indices dropped for the third day out of four, and they were down this morning. Once again, we are getting close to the long-term trend line, the 200-day moving average, which is where I personally start to pay attention.

It’s not the fundamentals

Earnings are coming in above even the very high expectations at the start of the announcement period. So far, according to FactSet, revenue growth is at 7.6 percent, while earnings growth is at 18.3 percent. These are extraordinary numbers. Profit margins are running at the highest level, 11.1 percent, since the records start. The corporate fundamentals are terrific. Plus, the economy continues to cook, with hiring actually accelerating from 2017 into 2018. With the recent tax cuts and increased government spending, there is even more of a tailwind. Things are looking good.

So, what’s the problem?

In fact, that may be the problem: the market has already incorporated all of this good news, and the recent prices are based on things getting even better—which may not be possible. There is evidence of this in the recent market activity. Companies are blowing away expectations on both earnings and revenue, but their stocks are declining anyway. This is a classic symptom of the late stages of a market expansion, when even stellar results don’t match expectations. It also raises the question of what happens when those results are less than stellar.

You can see signs of the problem in the chart above. The last time we saw a sustained pullback in the markets was just before the presidential election. What pulled us out of that slump was the expectation that a Republican-controlled government would do lots of economically positive things, which perked the market right up and kept it rising until earlier this year.

What are the risks?

The recent pullback was sparked by threats of tariffs, which remain possible, as well as the fact that interest rates are now rising—both from the Fed and from the rise in the deficit and inflation. These are real risks. We also have signs that growth may be topping out—another real risk. Finally, we have cost pressures, from both rising wages and material costs, that threaten current record margins—another real risk. Just as they did in late 2016, those real risks have pulled the market down. The question will be what, if anything, can pull it back up.

We don’t have anything like the last election coming up; indeed, the midterms are more likely to be disruptive than constructive. Similarly, both the economic and corporate news, while likely to continue to be healthy, are not likely to jump further in any unexpected or meaningful way. It is hard to see what a game-changing positive surprise would look like.

You can see the market wrestling with the problem in recent weeks. It clearly would like to move up, as the bounces from the tariff news show, but there simply isn’t enough conviction to push values above the previous high. Worse, each bounce is petering out at a lower level, and each drop takes us closer to the long-term trend line.

While the base case remains solid, therefore, the market risks continue to increase. I took the risk level to yellow in the last Monthly Market Risk Update, based on quantitative reasons. But looking at the big picture since then just leaves me more concerned.

This is not a reason to panic—far from it. Market weakness is a long way from a bear market. As I noted, the big picture remains quite supportive. It is, however, a reason to reevaluate our portfolios and to think about the risks we have in them. The time to fix the roof is before it starts raining, and the clouds are starting to show up.