KGI Securities analyst Ming-Chi Kuo was among the first to report that Apple would launch two OLED iPhones and an LCD iPhone this year. Kuo said earlier this year the second-generation iPhone X would feature a 5.8-inch OLED panel while the larger model dubbed iPhone X Plus would come with a 6.5-inch OLED screen. The third device would sport a 6.1-inch LCD screen, and would cater to the price-sensitive segment. In his latest research report (via 9To5Mac), Kuo sheds light on the LCD iPhone price.

Ming-Chi Kuo told investors that the LCD iPhone would be available in both single-SIM and dual-SIM variants. What’s even more interesting is that the LCD iPhone price would start at $550. Just to give you some perspective, $550 is the current price of the iPhone 7. The dual-SIM variant will have two physical SIM slots and no eSIM support. The analyst said the single-SIM version would be priced between $550 and $650.

The dual-SIM LCD iPhone price would be between $650 and $750. This year’s LCD iPhones would create a new price segment for Apple. Kuo believes the dual-SIM model will be sold only in select countries such as China and India where consumers have shown a clear preference for dual-SIM smartphones. The dual-SIM LCD iPhone with its affordable price tag would help boost Apple’s market share in such countries.

However, US consumers should not expect the dual-SIM technology on the iPhones. The US is more likely to get the single-SIM LCD iPhone because wireless carriers exert too much control there. Smartphone vendors and carriers told media last year that dual-SIM flagship smartphones are unlikely to find their way in the US because carriers make a lot of money off of international plans. If the US consumers had dual-SIM smartphones, they could keep their regular SIM active in one slot and buy a cheaper one from a local carrier while traveling abroad.

Earlier this year, Bloomberg reported that Apple was also considering dual-SIM functionality for the larger 6.5-inch iPhone X Plus. Supporting Bloomberg’s claim, Kuo noted that the dual-SIM support could also be added to the iPhone X Plus. Recently, DigiTimes Research said the cost of production for the next-gen iPhones would be about 10% lower than iPhone X.

Ming-Chi Kuo believes the lower LCD iPhone price would help make it the most popular iPhone this year. The device would have an iPhone X-like bezel-less design with a notch. It would also get the Face ID and Animoji features. Getting a phone loaded with these features for as low as $550 would be a dream come true for Apple fans. However, Apple will deprive the phone of the 3D Touch functionality, dual camera system, and the OLED display to keep costs down.

The KGI Securities analyst predicts that Apple would sell 100 million to 120 million LCD iPhones between the third quarter of 2018 and Q3, 2019. Not many people would be able to afford the OLED iPhones that are estimated to cost close to $1,000. Earlier this week, Taiwan-based Economic Daily News reported that the second-generation iPhone X would start at $899 while the 6.5-inch iPhone X Plus would cost $999. 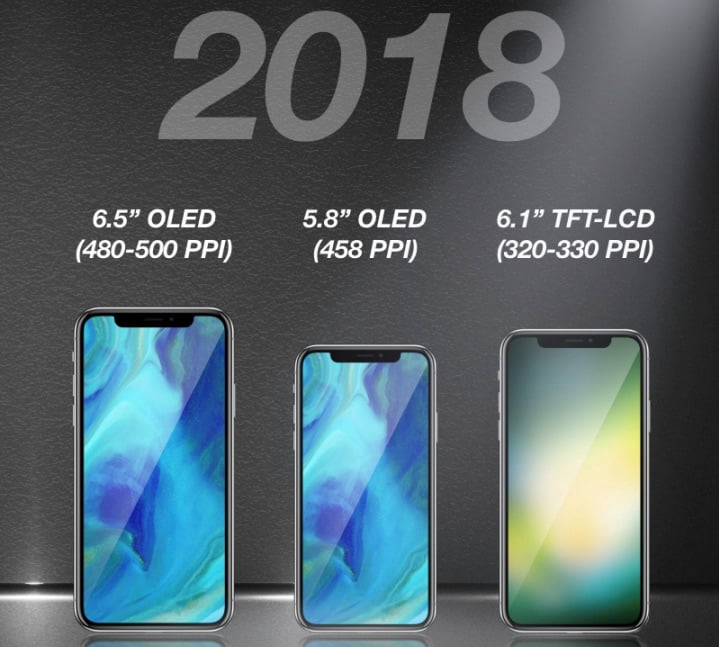 Sources told the Economic Daily News that Samsung was preparing to start OLED panel production for the next-gen iPhone X and the iPhone X Plus in May. The Korean company would produce only a small number of panels in May, but will double the output in June. The earlier than expected OLED production indicates that Apple would release all the three iPhones simultaneously this year, and there will likely be no delay.

Meanwhile, Consomac has spotted Apple’s recent regulatory filing with the Eurasian Economic Commission (EEC) in Russia. The regulatory filing indicates that as many as 11 new iPhone models are set to be unveiled soon, most likely in May/June. Consomac speculates that Apple might be planning to launch a refreshed iPhone SE 2. However, the unusually high number of new models has prompted experts to come up with their own theories of what Apple may have in store.

All the 11 devices filed with the EEC are Apple smartphones running iOS 11. The iPhone SE 2 could get an upgraded A10 processor and improved cameras. The iPhone SE comes in four variants, as do most other iPhones. So, it’s a big mystery why Apple is seeking regulatory approval for 11 new iPhones. If Apple is indeed planning to launch the iPhone SE 2, it would announce the device via a press release rather than holding a media event.

Ming-Chi Kuo argues that Apple is unlikely to launch iPhone SE 2 this year. The analyst says Apple is working to release three premium smartphones in September this year. The tech giant would not want to devote its R&D resources on a fourth device as it could lead to development and production issues. Even if the iPhone SE 2 is released, it would get only minor upgrades. The device is unlikely to get the Face ID, Animoji, or wireless charging features.