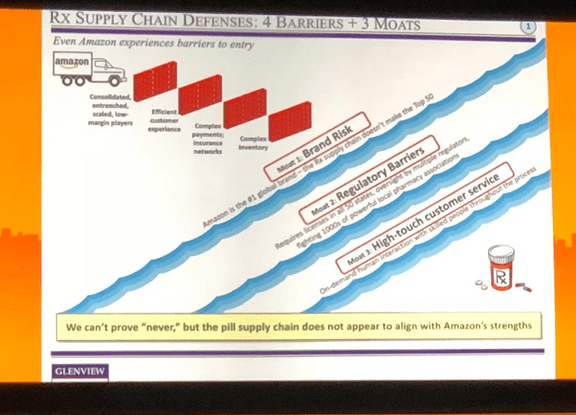 Larry Robbins on the healthcare sector and the non threat from Amazon.

Will Amazon enter the pharmacy supply chain? We think they may do something in next ten years. What could they do? They can offer limited supply for generic pharma. Will they get into PBM, we think no. Do we think distribution, we think no. We think in market place, imminently yes. How did people start talking about Amazon entering pharmacy. Axios reported that Amazon was talking to PBMs; fueled takeover speculation in Express Scripts and fueled speculation that going into PBM business. CNBC.com did a story saying Amazon was brink of deciding whether to selling drugs online.

Axios report was based on another report and when contacted, said report was taking out of context. Everything was just whispers of the same report. Did gain pharmacy license? No they got durable medical equipment license. These are different. CNBC reported that it was on brink of getting into pharmacy; decide by thanksgiving. We checked all the different sources. Yes, they hired some people from CVS and Express for web services business; didn’t hire anyone from pharmacy – no known hires. It was a very misleading scoop. CNBC.com has another article saying they shelve a plan to sell drugs to hospitals. We didn’t even think they had a plan to do this. 13.4mm hits if google “Is Amazon going to pharmacy business?” Most say yes.

Amazon isn’t in the business and don’t believe they are getting in because barriers of entry even for Amazon. Need separate cold storage and Amazon doesn’t have. UPS tried going in 2006 but couldn’t because need scale and the big ones have 90%. There are brand barriers, regulatory barriers and this is a high touch service which you simply cannot automate. For brands, failures / errors can cause death.