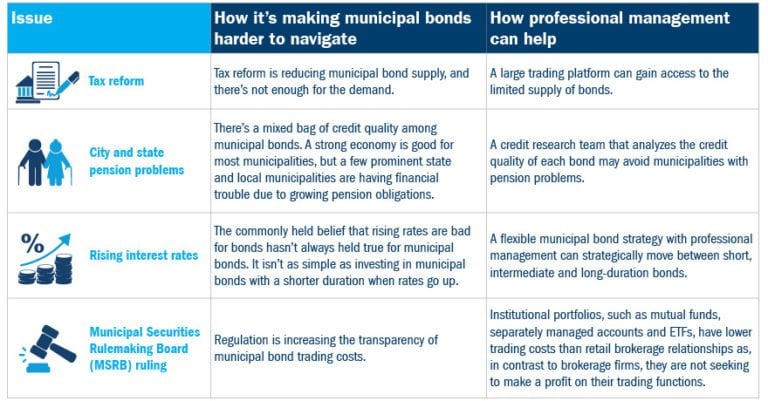 We believe there are good opportunities in muni bonds today. But you may need to do a bit more navigating to find them.

Tax reform, state and local pension problems, rising interest rates and new government regulations are affecting the municipal bond market outlook. And with these issues top of mind, we’ve talked to many investors who are trying to determine when — and where — to invest in today’s muni bond market. For financial advisors, this confusion is compounded by changing regulations requiring brokerage firms to disclose pricing markups on individual municipal bond trades to investors.

This combination of factors means that advisors may have to change their approach to building and maintaining municipal bond portfolios. Here’s more insight into the challenges:

Initial congressional tax reform proposals sought to stop private activity borrowers (PABs), like universities, housing authorities, hospitals and airports, from issuing municipal bonds. PABs comprise a large swath of the municipal bond supply. Facing uncertainty about their future, these borrowers rushed to issue bonds at the end of 2017 in order to get ahead of the proposed changes. December was a record month for municipal bond supply with $63 billion sold — compared to an average December issuance of just $30 billion.1 With many PABs accelerating their muni bond issuance last year, they’ll be subsequently issuing fewer this year.

Tax reform also eliminated the issuance of municipal bonds known as advance refunding bonds, which are issued by municipalities to refinance existing debt at low interest rates. They’ve comprised about 30% of the annual municipal issuance on average.2

Between the PAB borrowing acceleration in December 2017 and the end of advance refunding bonds, the muni market will likely shrink dramatically in 2018. Through the first quarter of the year, municipal bond supply was down 30% from the previous year,3 and we anticipate that this trend will continue through the remainder of 2018.

On the demand side, the top tax rates for individuals are lower, but the reductions are very small. The top three tax brackets remain in excess of 30% — 32%, 35% and 37% — meaning that most high-net-worth investors will still find significant value in owning tax-exempt municipal bonds. On the other hand, banks and property and casualty insurance companies had their top tax rate lowered more significantly from 35% to 21%, so their incentive to own and hold municipal bonds is significantly diminished. Although banks and insurance companies have largely stopped buying municipal bonds and are slowly selling portions of their existing holdings, individual investors have poured $7.8 billion into municipal bond funds since the start of the year, keeping demand strong.4

When you look at supply and demand overall, the resilient demand of individual investors has more than overwhelmed the meager new supply. Most new municipal bonds brought to market are heavily oversubscribed — we believe they have too many buyers for each bond, leaving little if any supply for financial advisors and their clients.

The credit quality of municipal bonds presents a mixed picture for muni investors. On one hand, an expanding economy is amply filling state and local governments’ tax coffers. We have strong consumer activity, rising wages and healthy real estate markets, and we’re seeing property, sales and income taxes all coming in at or above budgeted levels in most cases. For the vast majority of state and local issuers, the extended period of recovery and economic expansion has allowed them to mend their finances and restore their reserve levels in advance of the next downturn. But for a notable few issuers, legacy pension and benefits costs remain a source of continued stress. Illinois, New Jersey, Connecticut and Pennsylvania all face significant budget stress caused by large underfunded pension systems. Political dysfunction characterized by significantly delayed budgets and large non-recurring financial solutions have given rise to multi-notch rating agency downgrades, and there’s the threat of more to come.

While overall muni default levels remain very low, we believe the negative media reports emanating from these pension-funding challenged states and localities may begin to inaccurately reflect on the muni market in general. Remember Meredith Whitney’s 60 Minutes interview in 2010 predicting a wave of muni defaults that never happened? Well, in the past, these broad-brush perceptions of the muni market have resulted in periods of outflows and encouraged investors to demand more return for the risk they’re taking. It’s a challenging dynamic for investors, who are tempted to move away from an entire asset class that still has a lot of opportunity, when really they need to move away from a few weak state and local municipalities with pension problems.

Typical of fixed-income securities, the price of a municipal bond will generally go down when interest rates rise. But municipals are often less sensitive to interest rate changes than many people believe. Municipal bonds, as represented by the Bloomberg Barclays Municipal Bond Index, have produced positive returns in 30 of the last 34 years. This isn’t surprising given the long-term secular decline in interest rates since the early 1980s. What is surprising is that the 10-year Treasury rate rose in 13 calendar years during that same period (from the beginning of the year to the end of the year). What’s more is the Bloomberg Barclays Municipal Bond Index recorded negative returns in only three of those years (1994, 1999 and 2013). We’ve often heard the axiom that when the Fed is raising rates, you should stop investing in fixed income or invest in shorter-duration bonds that have less sensitivity to interest rates. But that rings somewhat hollow for municipal bonds.

Despite this overall resiliency, short, intermediate and long maturity muni bonds will react differently during periods of rising rates — and sometimes contrary to what one might expect. Beginning in 2004 and continuing through 2006, the Fed raised the federal funds rate 16 times. Yet over that same period, the best performing muni securities were those with the longest maturities as the yield curve flattened (the expectation may be that those with the shortest maturities performed the best). However, the reason longer maturities outperformed is based on numerous factors, including the flattening of the Treasury yield curve, issuance of higher coupon bonds (the standard is 5%) with call features and high premium bonds that often result in municipal bonds trading like shorter securities.

Effective May 14, 2018, the Municipal Securities Rulemaking Board (MSRB) Rule G-15 requires that brokerage firms disclose to retail investors the pricing markup or markdown on municipal bond trades. The information will be conveyed on trade confirmation statements and specific information will be provided on the cost to the customer, the cost to the firm and the relative difference between those prices — essentially, the statements will identify the profit the firm is making on each trade. In contrast to brokerage firms, which buy bonds for their inventory and then earn a profit when selling those same bonds to clients, institutional managers, such as mutual funds who are not in the business of earning a profit on their trading operations, purchase the bonds and put them directly into the portfolios at no markup to investors. We believe that the requirements of this rule will make it apparent to retail investors that transaction costs for municipal bonds, especially small odd lots, are significantly higher than those for comparably sized equity trades.

We believe there are still good opportunities in muni bonds, despite the challenges this market is facing. In changing market conditions like these, professional management is needed now more than ever before to help navigate the swirling market currents, find value and avoid unintentional risk.