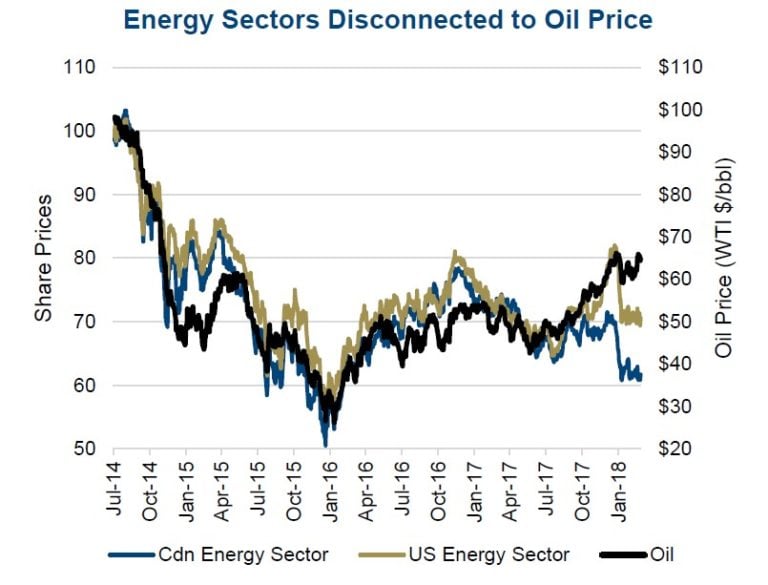 A barrel of oil, West Texas Intermediate, currently fetches $65 per barrel, that is a fairly decent price looking back over the past three years. Brent is closer to $70. Still a far cry from $100+ price prior to mid-2014 but also materially above the $30 trough of Q1 2016. Yet, the majority of energy related companies appear to have materially lagged the recovery in the underlying commodity price. This spread has been exacerbated for both Canada and the U.S. energy sectors in the past few months (chart). This leaves us wondering who is right and who is wrong. Are the equities right, which means the price of oil is set to fall? Or, is the commodity right and the equities offer a compelling buying opportunity?

Demand has been greater than supply in most months since early 2017, which has helped address the global glut of inventories. Demand has been good thanks in part to global economic growth in just about every economy. China imports and Energy Intelligence Global Demand appear to both be growing in the low single digits relative to last year while U.S. demand has risen sharply of late. With demand stable and growing, let’s turn to supply. OPEC has been very good at keeping a lid on production, to help orchestrate the revival in oil prices. Upticks in supply from Libya have been offset by declines in Venezuela and the Kingdom of Saudi Arabia. This is all widely known, so the big question is what happens next. 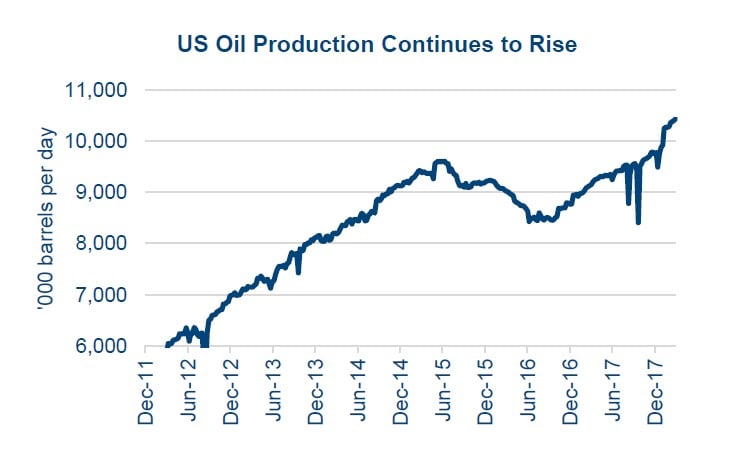 Distrust of OPEC – There is no denying OPEC is self-motivated. The drop in oil was an attempt to stop U.S. production growth to help OPEC retain market share. Once the pain was too great for their member’s finances, OPEC cut and triggered the revival in oil prices. This caused a resurgence in U.S. shale production, which we will cover shortly, and improved the finances of OPEC member states. It also made a friendlier environment for Saudi Arabia to IPO a portion of Aramco, the state-owned oil operations. Many believe, ourselves included, the Kingdom will keep a lid on production to support prices at least until the IPO has been completed, which has now been pushed back to  2019. Afterwards, it does get tougher to say. A good reason to not buy the longevity of current oil prices. 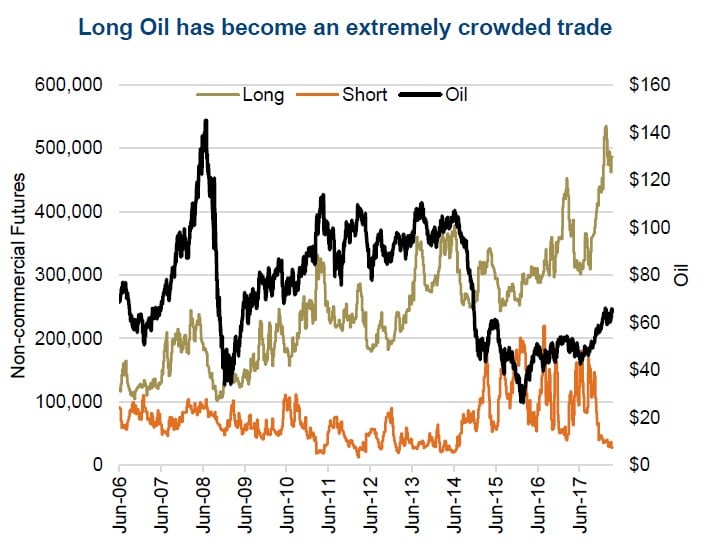 Political Risk – This feeds mostly into a potential for higher oil prices. Venezuela is in a dire situation and oil production continues to decline. At the end of 2015, they were pumping almost 2.4 million barrels a day (mbd) but are now down to 1.7mbp. If turmoil accelerates, this could lead to a sudden drop. Then there is Iran; whileVenezuelan production dropped, Iran ramped up thanks to the end of sanctions. Iran went from 2.8mbp in late 2015 to 3.8mbp today. The U.S. has said they are not happy with the deal to end sanctions and if that falls apart we could see much less oil coming out of Iran. 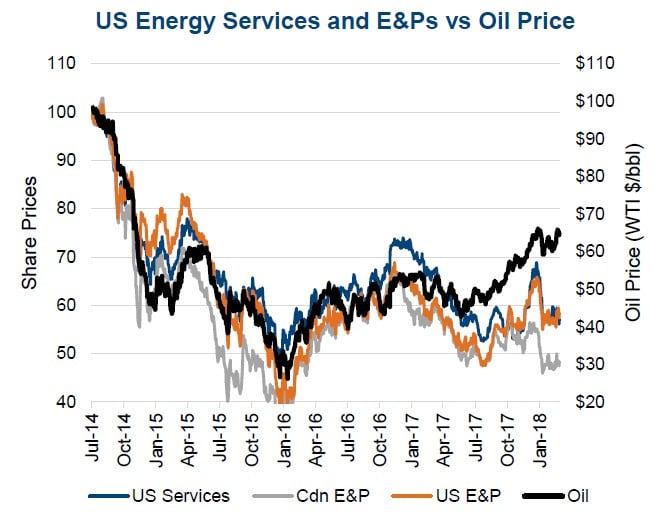 Shale – In the end of 2011, U.S. oil production was below 6mbd. It then rose with high prices to 9.5mbd in mid-2015. OPEC flooding the market caused U.S. production to pullback to 8.5mbd by June of 2016, but has been climbing fast. The latest weekly data had U.S. production at 10.43mbd, which is now higher than Saudi Arabia. U.S. production has proven resilient due to lower cost, thanks to productivity improvements and price cuts from service providers. While still a net importer (otherwise Canada would fill up with oil), the U.S. now exports 1.5mbd following the easing of restrictions. With easy capital, the rise of U.S. production appears strong…..will OPEC blink again and turn the pumps back on? 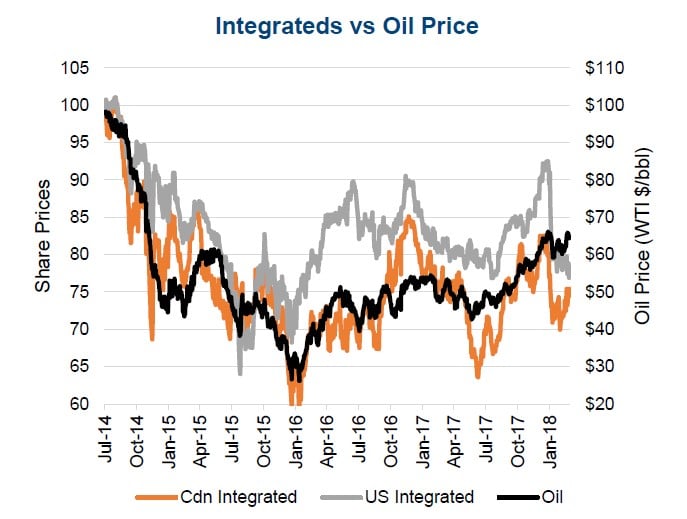 Speculators – Another potential negative for the price of oil is the amount of speculative bets that prices will rise. We are currently sitting near record levels of non-commercial (that is speculators) bets the price of oil will rise and near record lows of bearish bets (2nd chart). This doesn’t necessarily have to reverse but if oil falls, the longs will unwind, accelerating the decline.

Putting all these factors together we are left with a somewhat bearish view on oil prices. There is clearly no shortage of oil, with strong demand and OPEC restraint auguring for a constructive environment for oil prices. Changes in any of the aforementioned factors, in either direction, could easily send oil prices higher or lower. But while we have a bearish tilt, the valuations in the equities appear to be pricing in a rather bearish scenario. That may be the opportunity.

Even if you have your doubts about the commodity price holding current levels, you would be hard pressed to say the equity prices reflect the current environment. With that does come a degree of safety, notably for the integrateds. The bottom two charts contrast the oil price since 2014 against U.S. Energy Services, U.S. and Canadian E&Ps and Integrateds (bottom chart).

While we have been and remain underweight energy in our portfolios, we have become a bit more constructive in the more defensive integrateds given this disconnect between the commodity and share prices. It is also worth noting that we believe we are in the late stage of the cycle and the Energy sector is one that tends to do well during this stage.