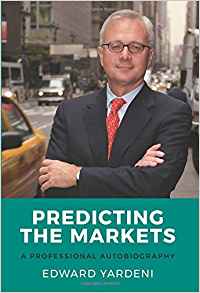 In one way or another every investor and trader predicts markets, even though some claim they’re not doing it and others decry the very attempt. Warren Buffett, for instance, famously said that “the only value of stock forecasters is to make fortune tellers look good.”

The book, which spans the author’s 40 years on Wall Street, ranges over geographies, socio-economic and business phenomena (technology and productivity, inflation, business cycles, consumers, demography), and markets (real estate, bonds, commodities, currencies, corporate earnings, valuation, stocks). The book itself contains no charts, a decision I applaud. Instead, the charts, and updated versions of them, are available on a companion website and are downloadable as .pdf files.

Yardeni has always grounded his prognostications in current analysis, which Ben Bernanke described as “getting an accurate assessment of the current economic situation, requiring a deep knowledge of the data mixed with a goodly dose of economic theory and economic judgment.” Throughout the book Yardeni explains the theory and judgment he brought to bear on relevant data to inform his predictions.

Yardeni is an old-school economist who claims never to have run a regression since his graduate school days. As a result, his book, though occasionally dense, is eminently readable by anyone with an interest in the interplay between economics and the financial markets over the years. No math background required.

Although Yardeni’s charts and the book’s final chapter bring his story up to date, one of the greatest contributions of this book is the historical context it provides to those economists and Wall Streeters who haven’t had such lengthy careers as the author. Perhaps even more important is the insight it offers into current analysis and the interplay among economic and market variables. In an obvious case, as Yardeni writes, “Predicting the stock market shouldn’t be all that difficult since only two variables drive it … -- earnings and the valuation of those earnings. But it’s tougher than it sounds, because both of those variables are driven by so many others.” Predicting the Markets connects a lot of dots.