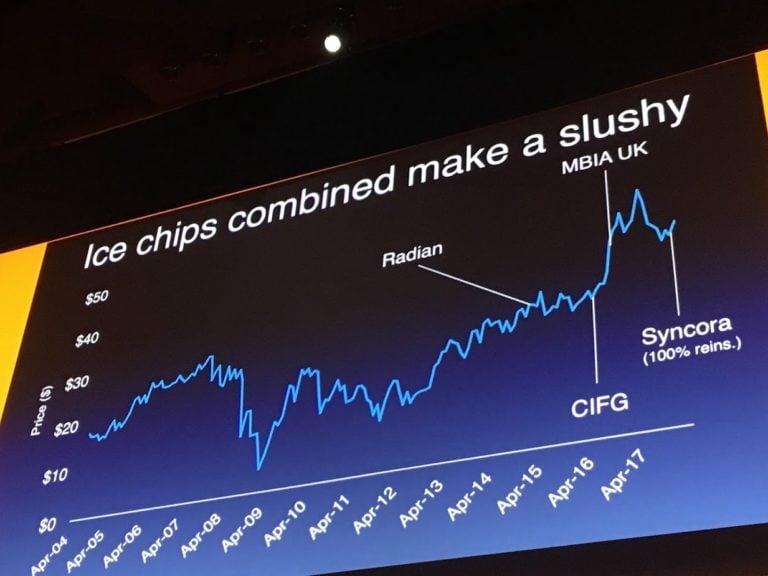 In 2002, I shared a short idea of a mid sized financial institution, Allied Capital, that most of you hadn’t heard of.  Allied Capital had serious problems – large losses it refused to account for, it created its proprietary grading system that helped it hide its losses, it fooled its auditors who were asleep, it fooled its investors by aggressively returning capital it didn’t really earn.

Today I’m going to present another short of a mid-sized financial institution most of you haven’t heard of that has serious problems, including losses it hasn’t accounted for, created its own proprietary grading system which helps hide the losses. It has fooled its sleeping auditors and regulators, and lures investors by aggressively returning capital it hasn’t earned it is Assured Guaranty (AGO).

It is a melting ice cube that is paying out the drops while it still can.  When regulators, auditors, rating agencies figure them out, I doubt there will be any drops left for shareholders.  AGO is a bond insurer.  Bond insurance and financial guaranty insurance is where insurance companies guaranty the interest and principal payments from bonds that are called.  Starting in 1971, Ambec insured municipal bonds, rating agencies gave muni bonds lower ratings that corporate bonds with the same risk, which raised their borrowing costs.  Bond insurers arbitraged the ratings.  Once insured by a AAA bond insurer, the muni bonds automatically became AAA, which reduced the borrowing costs.  In effect, the bond insurer split the savings with the municipality.  Bond insurers prospered 25+ years because muni bonds almost never were called.  Even when municipalities defaulted, bond insurers usually recouped any claims hence the term zero loss insurance.  Almost perfect money machines attracted competition, which made bond insurers find other ways to grow, starting with lower rated municipalities, followed by corp bonds and eventually structured finance.

Risk taking accelerated and culminated with a pop in 2008.  Bubble do pop or atleast they used to.  Bond insurers, MBIA and AMBEC, crashed.  Once ratings were downgraded, they couldn’t write new business and they went into run off.  Post crisis, agencies admitted they underrated muni bonds and rescaled things to match corp bonds.  This effectively ended the ratings arbitrage.  In 2015, the SEC made it official by requiring rating agencies to weigh credit default risk consistently for all securities.  Pre-crisis, about half a million munis were insured. With the rating scale corrected and no AAA bond insurers left, the arbitrage was nearly gone and insurance is purchased less often. AGO is one of the few survivors.  AGO was part of [x] in 1988 and went public in 2004.  Unlike MBIA and AMBEC, AGO survived the crisis relatively unscathed.  AGO started as AAA but Moodys downgraded in 1999 due to industry competition.  This probably saved the company because without AAA rating during the financial crisis, it couldn’t compete and it wrote less bad business.  After the financial crisis, AGO wobbled but didn’t fall.  AGO did have structured finance business and paid out $5.1Bn in losses but when dust settled, AGO was able to recoup 70% by suing the banks who sponsored the deals for fraud.  Since the financial crisis, the majority of structured finance exposure is resolved and book of business has shrunk.