Since the 1980s, a new generation of chaos capitalists have been undermining the progress of emerging economies. Under the pretext of “efficient markets,” they seek to exploit real or perceived weaknesses.

Amid the global crisis, Chanos predicted that China would collapse.Nevertheless, CNN characterized his 2009 call as “brilliant.”

The question is, why?

Interplay of shorting and media

Like CNN, most international media portrays Chanos as a “financial wizard” who has made made fortunes from shorting companies ever since 2001 when he targeted the US energy company Enron that he predicted would fall before it filed for bankruptcy.

In fall 2009, Chanos predicted China would head the way of the "old Soviet Union". In January 2010, the New York Times reported Chanos’s prediction that China’s economic crash would resemble “Dubai times 1,000 — or worse.” Few months later, Chanos said on the PBC Charlie Rose Show China was on a "treadmill to hell.”

Chanos likes to cultivate financial ploys with dominant media. In the early 1980s, when his target was the insurance firm Baldwin-United, he “guided” Forbes writer Dick Stern through his analysis. In the mid-80s, Wall Street Journal accused short-sellers like him of spreading rumors and impersonating a Journal reported to access to insider information. With Enron in 2001, Chanos fed Fortune’s Bethany McLean, who prospered from a book deal, as did Joe Nocera, another high-profile business reporter (who also has been dogged by claims of “conflict of interest”). In the process, Chanos, along with other hedgefunders like Steve Cohen and Daniel Loeb, were sued for paying negative stock-research reports that helped drive down stock prices.

After Chanos made his China prediction, David Barboza of New York Times, following in the footprints of CNBC and Politico.com, reported that “contrarian investor sees economic crash in China.” As these stories failed to create a backlash against China, Fortune, among others, released a story about “Chanos vs China,” in which the hedgefunder said that China was a huge real estate bubble.

As China’s progress prevailed, Chanos began a new round in 2015, when Joe Nocera of the New York Times, again, released a major report about “The Man Who Got China Right.” Now China’s fall was sold as a commodity bubble. “You dismiss [skeptics and contrarians] at your peril,” Nocera warned. While the story did not prove true, it contributed to the tripling of Chanos’s fund to $3 billion in half a decade.

But as China’s growth stil prevailed, Chanos began his most recent media round, this time with CNN where he declared: “Nobody ever makes any money in China,” although droves of US subsidiaries have thrived in China, from Apple and Boeing to GM. Chanos also warned countries in Africa and South America as well as Australia that relied on Chinese commodity demand and dismissed the success of Chinese firms, such as Tencent and Alibaba, as “accounting” and “corporate” frauds.

That’s the Chanos game - well-timed interviews, shorting of companies and nations, and collusion with dominant international media. But what about its truth value?

During the Great Depression, US living standards declined by almost 30 percent in four years. But that was not Chanos’s yardstick. Instead, he made an explicit comparison with the collapse of the Soviet Union, which caused the Russian GDP to decline by 45 percent in the ‘90s. In reality, between 2008 and 2018, the Chinese economy will triple to $13.1 trillion. Meanwhile, foreign multinationals operating in China have reaped great profits, along with investors.

Chanos’s prediction, based on the collapse of the Soviet economy, would have meant the plunge of Chinese GDP from $4.6 trillion in 2008 to $2.1 trillion today. In other words, Chanos’s projection of the Chinese economy proved to be almost 700 percent smaller than the actual reality (Figure). 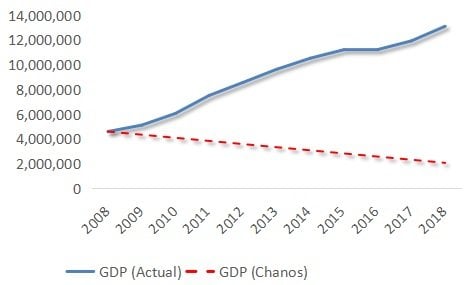 CNN prides itself as the “world’s most trusted name in news.” So to claim that “Chanos got China right” would seem to be grossly disproportionate and as if the global news hubs would allow itself to be played by private financial interests

Historically, these financial plays may have intensified since the 1980s, when George Soros made early fortunes starting with the destabilization of Chile and commodity markets, shorting the British pound in 1992, and currency plays amid the Asian financial crisis in late ‘90s. What’s less known are the economic consequences of his “philanthropy” in world regions where destabilization has caused massive dislocations in geopolitics but fortunes to his fund.

More recent examples include hedge funds, such as NML Capital, a subsidiary of Elliott Management, a hedge fund co-led by Paul Singer, as well as Aurelius Capital and Dart Management. In late 2001, Argentina defaulted on $132 billion in loans during a disastrous depression. While 93 percent of creditors accepted discounted bonds, a small minority - US hedge funds - didn’t, even though they had bought many of their bonds at a huge discount after Argentina had defaulted. Thanks to a 2012 ruling by a New York court, Argentina was pressed to a $2.3 billion settlement, which meant a return of 1,180 percent to Singer’s NML.

While the chaos capitalists’ methods differ - Chanos likes to short his victims, Soros prefers arbitrage to paralyze his targets, Singer likes to buy up sovereign bonds on the cheap and go after countries for unpaid debts - they use private capital to enrich themselves at the expense of sovereign nations, while lobbying in Washington and political donations to make and break US administrations, mayors and governors.

In addition to liable companies, chaos capitalists target increasingly vulnerable economies. Soros’s Open Society initiatives are in Eastern Europe and emerging Asia in which “color revolutions” promote financial ploys. Starting with Peruvian debt in 1996, Singer has gone after Argentina, the Republic of Congo, and gives sizable donations to anti-Iran groups. All see great opportunities in a destabilized Russia.

Since 2015, Chanos has focused on “frontier markets,” particularly Nigeria and South Africa in sub-Saharan Africa. He manufactures perceived liabilities with media. In such “short-and-distort” campaigns, the manipulator shorts the stock or the country and then spreads misleading of false negative information to drive the price down, leading to a huge profit when the investor eventually closes the short position.

Dr Dan Steinbock is an internationally recognized strategist of the multipolar world. and the founder of Difference Group. He has served at the India, China and America Institute (USA) , the Shanghai Institutes for International Studies (China) and the EU Center (Singapore). For more, see http://www.differencegroup.net/

The original version was released by China Daily on April 23, 2018