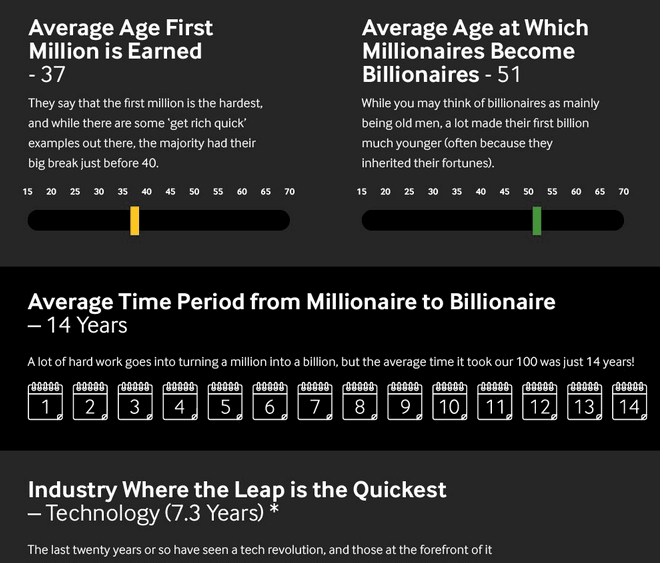 There are now over 2,000 billionaires in the world, more than ever before, with the number doubling in the last decade. The average wealth of these billionaires is $4.1billion, a record high and their wealth combined is a huge $9.1trillion, another record amount. This amount of money is unfathomable to most, but just how did these people make their millions and just how long does it take to go from millionaire to billionaire? 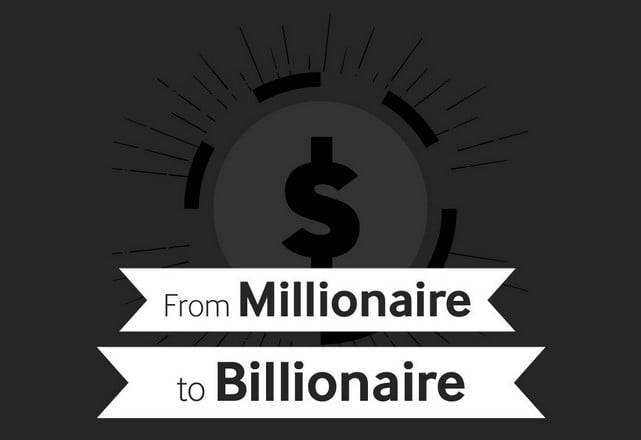 Following the release of Forbes ‘The World’s Billionaires List 2018’, Betway Insider wanted to take a dive into the data behind the billions and explore the averages of the world’s richest people. As well as looking into ages, industries, and education, the data also looks into how long quickly (or slowly) it has taken the top 100.

Looking at the likes of Mark Zuckerberg, who turned his millions into billions in just one year, and Jeff Bezos who took just two years, they make the million to billion jump seem easy. However, considering the average time to make the leap is 14.3 years, there are some who do it in considerably less time and others considerably more. When it comes to ages, the first million is on average hit at 37, whilst the first billion being hit at 51. There are some on the list who have taken considerably longer, with Sheldon Adelson taking 41 years to hit his first billion.

In terms of industries, it’s no surprise to find out that the tech industry sees the quickest leap into the three comma club, with the average time being 7.3 years - nearly half that of the average 14.3 years. The lucrative business of technology has increased over the years with companies like Apple, Microsoft, and Amazon dominating the rich lists. It is quick movers like Bezos, Gates, and Zuckerberg that have pulled down the average time, making technology the quickest to jump and also the most popular industry within the top 100.

When looking into the other industries that featured within the top 1100,  there are a number of sectors that are home to some of the world’s billionaires, such as Fashion & Retail to Gambling and Casinos. However, it is still the tech industry that is featured the most and holds the most billionaires. Other industries that made the jump quickly were Metals & Mining, Energy, and Automotive - however, it’s important to note that many of these leaps were done through inheritance, and whilst a selection of the people on the list did inherit their first million, through hard work they have built on their inheritance to turn a million into a billion. In contrast, the industries that take the longest to make the jump were Finance & Investments, Construction & Engineering, and Gambling & Casinos, which took the longest at 40+ years.

When it came to education, the general thought would be that a high level of education and a number of degrees would be most fitting to the world’s 100 richest people, however, surprisingly ⅓ of the top 100 don’t have a degree. Both Mark Zuckerberg and Bill Gates dropped out of Harvard and other billionaires such as Amancio Ortega, the founder of Zara, and Wang Wei, the founder of SF Express, have no university education at all, yet are still some of the richest people in the world. These figures challenge the status quo that to be rich, one has to have a university education.

However, for the ones that did attend university, the most popular was Harvard, with Steve Ballmer, the former CEO of Microsoft and Jorge Paulo Lemann, a successful Brazilian investor, just some of the alumni that are now part of The World’s Billionaires List. Whilst there a number of degrees that are popular amongst the mega-rich, such as Economics and Business, however, it is a degree in Engineering that is the most popular with the world’s billionaires, from Electrical Engineering to Civil Engineering, there were over 20 people in the top 100 that had a degree in some form of engineering.