The Walt Disney Company (NYSE:DIS) operates as an entertainment company worldwide. The company operates in five segments: Media Networks, Parks and Resorts, Studio Entertainment, Consumer Products, and Interactive. The company is not a typical dividend growth stock, although it has paid dividends since 1957, and has never cut them. Disney is a dividend angel which often raises dividends several years in a row, after which it keeps them unchanged. This is followed by another round of dividend raises again.

The most recent dividend increase was in December 2017, when the Board of Directors approved a 7.70% increase in the semi-annual dividend to 84 cents/share. The largest competitors for Disney include Time Warner (NYSE:TWX), Viacom (NYSE:VIA) and Twenty-First Century Fox (NASDAQ:FOXA).

Over the past decade the stock has delivered an annualized total return of 14.20% to its shareholders. Future returns will be dependent on growth in earnings and dividend yields obtained by shareholders. 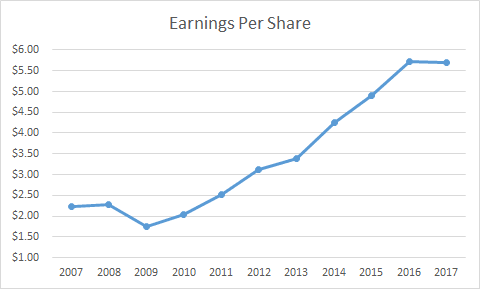 Between 2007 and 2016 The Walt Disney Company has been able to reduce the number of shares from 1.962 billion to 1.521 billion through consistent share buybacks.

Media networks is the bread and butter segment for Disney, as it generates almost half of the company's profits. Disney has ESPN, which covers sports, and which are pretty popular. The dominant position in sports programming has allowed the company to earn affiliate fees from networks and advertising revenues. If you want to talk about sports in the office, you want to get the game and in-depth commentary from ESPN. The profits from this segment are further reinvested on long-term rights for college and professional sport athletics programming. The company also owns Disney Channel and ABC Network. Disney Channel is one of the go-to places for programming for children, the other being competitor Nickelodeon.

I generally view the segments for theme parks & resorts, consumer products, and studio entertainment to be pretty intertwined. The company does offer a pretty diverse group of movies, and has been on a roll recently by unveiling a string of blockbusters. Studio entertainment accounts for close to 17% of profits. Disney can then utilize characters from those movies in its theme parks, where people pay more each year to get in and have a family vacation. Those theme parks generate approximately 20% of company profits. Then, the company also earns 10% of earnings on consumer products which have those characters. I really like how the company has created its own ecosystem, where consumers see a movie, then go to a theme park to see characters from that movie, and then purchase products with the protagonists from those movies.

The challenges with movies is that they typically do not generate recurring revenue streams. However, the company has such a diverse group of movies, ranging from children's, to action heroes, that it can monetize this content through channels like DVD sales, sales to TV channels etc. The thing about Disney's content is that it is family friendly, which is why parents trust it and children enjoy it. This content can be used in the future, and be sold and repackaged in whatever transmission device people are or will be using in the future. As Warren Buffett has said about Disney, their children's movies essentially are a perpetual royalty on youth.

The company of course does not only offer children's movies. It has been on an acquisition spree, purchasing Lucas Films and Marvel. Those come with audiences which are willing to go to the theater and see the latest movies with their action heroes. Creating movies is a hit or miss game for studios. However, when you have an established franchise, the odds of producing a hit increase substantially. The ability to have sequels, and sell those sequels in other segments is a unique competitive advantage. That library is valuable, and could be monetized for years into the future.

The one risk I could think of is that Disney has been killing it in the box office recently. Generating blockbuster hits is something that should not be taken for granted however. If some of its movies flop, its earnings would decrease. This is why it is important to not get too excited as well, but consider risks to movies, entertainment and cable franchises. I am sure they will dig their way out of this however. Any short-term stumbles would likely present an opportunity to buy more shares at a discounted valuation. 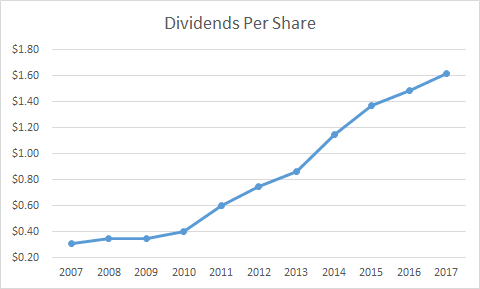 In the past decade, the dividend payout ratio increased slightly from 13.80% in 2007 to 28.50% in 2017. The company has a perennially low dividend payout ratio, as the rest of money is allocated to expand the media empire, and provide more dividends in the future. A lower payout is always a plus, since it leaves room for consistent dividend growth minimizing the impact of short-term fluctuations in earnings. 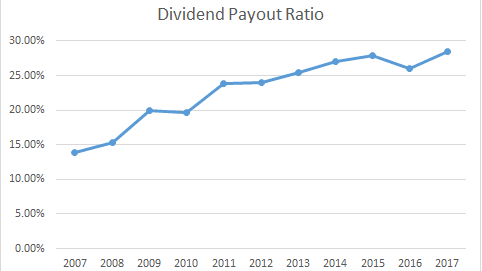 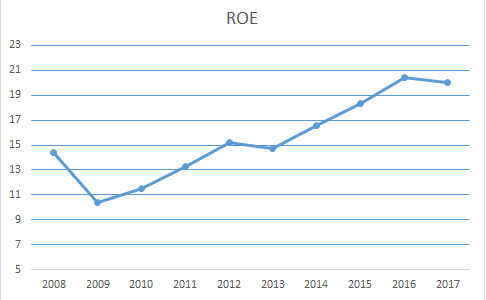 Currently, Disney is attractively valued at 15.50 times forward earnings. The company will probably turn off many investors because it has a low yield of 1.60% and pays dividends twice an year. However, I really like the company, and I believe it has a wide moat. I had hesitated initiating a position in the company in the past, because of irrelevant factors such as low yield, while ignoring the company's strong competitive position. I felt more comfortable initiating a position in the company at lower prices. I believe that this is an amazing business, that is available at an attractive price.

If you have had the fortitude to purchase Disney, I believe this is the type of company to hold for decades, while quietly compounding your wealth and dividend income.

Disney's integrated business of theme parks, movies, & consumer products result in a wide moat with a royalty on youth. Disney's Media Networks also has a wide moat with ESPN. I believe this is the type of company to hold for decades, while quietly compounding your wealth and dividend income.