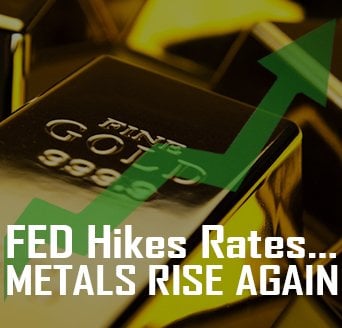 On Wednesday the U.S. Federal Reserve hiked short-term interest rates for the 6th time since the present cycle of rising rates began in December 2015. The federal funds rate now stands at a 1.50% – 1.75% target range. As we predicted last week, precious metals indeed rose immediately following the rate hike decision, rising $23 in the two days after the meeting to close at $1,346 as of the close of the spot market on Friday afternoon. For the week in sum, gold closed higher by 2.9% or $38.

This phenomena of rising precious metals prices amidst rising interest rates stands in complete contrast to the scenario that the mainstream financial press typically states should happen amidst a period of rising rates. Specifically, the mainstream media continues to claim that as fed rates rise, gold prices should fall.

What is the reason that mainstream analysts expect gold to fall amidst rising interest rates?

The theory is that as rates rise, investors should have more incentive to keep funds in interest-paying accounts such as bonds or certificates of deposit (CD’s) or savings accounts. Gold bullion, it is argued, pays no interest, and should be sold as rates rise.

We need to look no further than the weekly financial press to see this form of analysis presented to precious metals investors. For example, note the following article courtesy of MarketWatch.com (March 1, 2018), which quotes: “rising interest rates would pressure the metal because bullion pays no interest.” 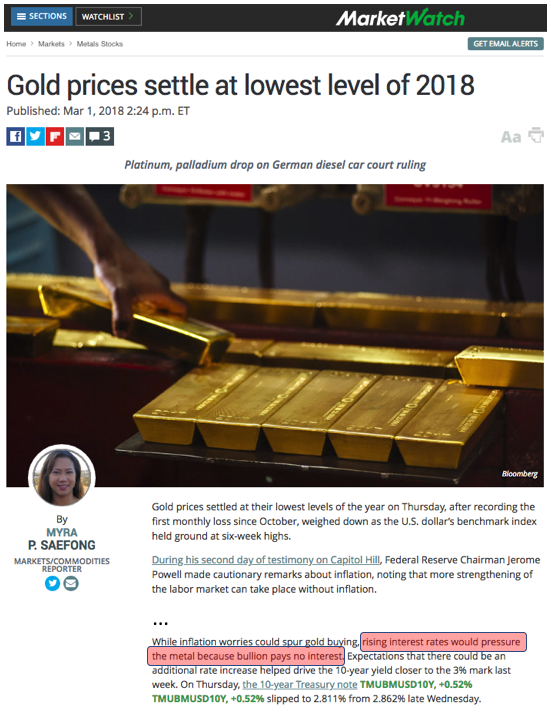 To debunk this myth that rising interest rates are negative for precious metals, let us examine two sample periods from history to show the actual correlation between the two asset classes: 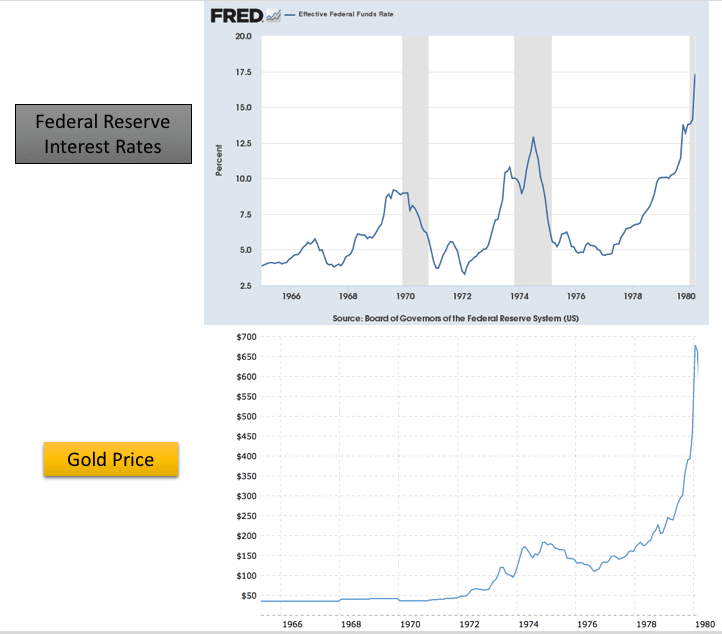 To be as concise as possible: following the unsustainable spending associated with both the Vietnam War and numerous domestic social programs of the 1960’s, a rising interest rate was part of the environment over the next 15 years through 1980 and was the backdrop to the largest precious metals bull market in history. Indeed, between the late 1960’s and 1980, gold broke the dollar standard at $35 per ounce and advanced over 2,000%, as the Federal Reserve increased interest rates from 3% to 17%.

Were rising interest rates negative for gold? The evidence shows points to no.

Next, let us examine the most recent period, as the Federal Reserve has hiked rates six times since December 2015. Below we will show the price of gold, with the exact corresponding date of each Fed rate hike:

Let’s dispel this myth once and for all.

Why do precious metals rise with rising interest rates?

To understand the trend of rising metals prices amidst rising interest rates, we must alter our perspective of the Federal Reserve from what is often discussed in the mainstream press. We must see that the Fed is a reactive, not a proactive institution.

The Fed receives incoming data related to inflation, employment, and the solvency of its own member banks — and then responds accordingly with monetary policy.

The key point is that the Fed responds after incoming data is observed.

Fed governors have no crystal ball. Being a reactive institution, when would the Fed logically decide to raise interest rates? Only when it is forced to do so by rising inflation expectations from the market itself. In other words, the Fed only raises interest rates when inflation is becoming apparent in the broader economy.

Gold is the ultimate protection from inflation over the long term. This is why gold tends to rise in a rising interest rate environment.

The proof is in the charts. The highest period of inflation that the United States has ever witnessed was from the late 1960’s through 1980, during which the consumer price index (CPI) rose to 14% year over year: this corresponded to the strongest precious metals advance in history.

It is uncertain why the mainstream media continues to suggest that rising interest rates are negative for precious metals prices. It may simply be one of those myths that takes on a life of its own, or it may be a scare tactic designed to separate investors from their gold at critical junctures.

Regardless of the cause, investors should check the actual proof from the history of rising interest rates and gold prices: rising rates continue to be supportive for precious metals prices, not the opposite.