The bad blood between bankers and bitcoin dates back to the beginning … and this battle just got real.

In the very first bitcoin block in January 2009, Satoshi Nakamoto embedded this message, accurately describing the zeitgeist of the times:

The Times 03/Jan/2009 Chancellor on brink of second bailout for banks.

That first block, also known as the genesis block, marks a pivotal point in history. It will be no different than similar world-changing events such as the Boston Tea Party, “the shot heard round the world” and the Reformation.

That’s because bitcoin, and the underpinning blockchain technology, marks a monumental paradigm shift in our reliance on centralized authorities. For the first time in human history, we can create a unique piece of digital value that is censorship-resistant and can easily be stored and transferred without the need for a middleman.

With this new technology, centralized companies and governments that procure and profit off their intimate knowledge of the behavior of private individuals will face competition from decentralized networks. The blockchain ensures that data no longer needs to be stored in centralized locations, meaning no central authority has control of that information.

This has wide-ranging implications for the nature of both businesses and governments.

And the spread of this new technology was a direct result of the prevailing conditions of the times.

Following bitcoin’s 2009 launch, a decade-long perfect storm of economic, political and social conditions gave way to a price move from $0.001 to $10,000, as public trust in governments and banks plunged to an all-time low.

Since the 13th-century advent of the fractional-reserve banking system, banks have been the crucial gatekeepers to the creation of money. They decide who is creditworthy and who is not.

Originally skeptical of the new technology that could potentially replace them in the banking hierarchy, bankers have publicly dismissed blockchain, calling it a “fraud,” a “scam” and a “Ponzi scheme.”

But recent headlines from a few multinational banks suggest that they are starting to take blockchain and bitcoin (you can’t have one without the other) more seriously than ever.

In its February 22 annual report to the Securities and Exchange Commission, Bank of America admitted that bitcoin and cryptocurrencies pose a “substantial risk” to its banking business.

In the filing, the bank mentions: “Our inability to adapt our products and services to evolving industry standards and consumer preferences could harm our business.”

Shortly after Bank of America’s admission, JPMorgan Chase’s annual report counted cryptocurrencies such as bitcoin and Ethereum as “risk factors” to its business for the first time. CEO Jamie Dimon says he regretted calling bitcoin a “fraud,” and now recognizes the digital currencies as competition that could give the bank a run for its money, pun intended.

Meanwhile, the banks are rapidly figuring out ways to capitalize on blockchain growth. JPMorgan is developing its own enterprise version of Ethereum technology called Quorum. Bank of America recently posted a job search for cryptocurrency analysts and Goldman Sachs-backed startup Circle purchased the crypto exchange Poloniex for $400 million.

Up until now, the banking system hasn’t innovated because it hasn’t needed to. None of the tech innovations implemented by banks in the past decade, such as high-tech ATMs or mobile apps, have resulted in cheaper fees for the consumer. Their oligopoly remains stronger than ever. 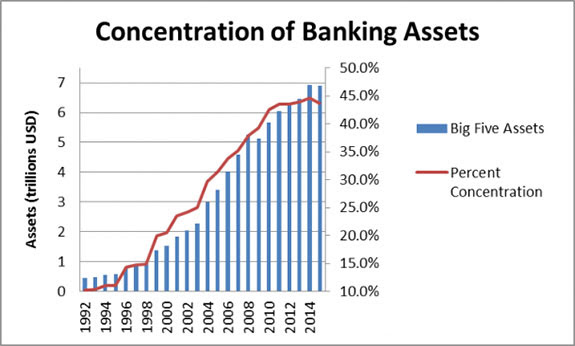 Comically, a recent Wall Street Journal article highlighting Bank of New York Mellon’s recent attempt to innovate noted that the bank still receives about 20,000 faxes a day. There is an entire generation of crypto-trading millennials who haven’t suffered through the agony of waiting for a fax, nor the accompanying eardrum-piercing frequencies.

The Bottom Line for Bitcoin

Every few decades, a new technology comes along that renders existing businesses obsolete. The telegraph replaced the telegram messenger; cars did away with the horse and buggy; and the internet disrupted the entire publishing, music and media business.

Similarly, blockchain technology will disrupt anyone who sits in the middle of a value-creation process. Tokenized ride-sharing protocols will replace Uber; rental networks will do away with Airbnb; and intelligent networks of allocating capital will replace the financial intermediaries that currently dominate our capitalist system.

The rise of cryptocurrencies will offer a better way to transact and store value, making the banks resemble the post office at the dawn of the internet. But, like the fax machine, there will always be a generation that just prefers doing things the old-fashioned way.