ValueWalk
Home Info-Graphs How The World Is Improving 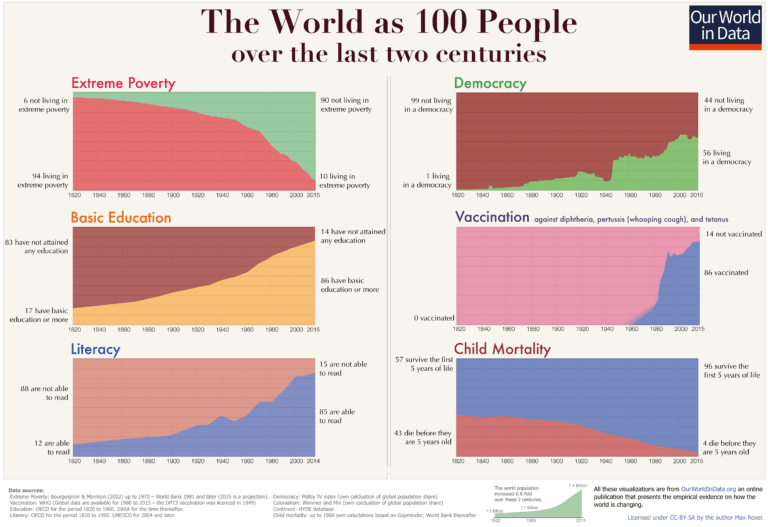 It only takes a few minutes of cable news to get the feeling that the world is heading into a tailspin.

In fact, the news cycle thrives on fear and violence, so mainstream networks find a way to fill up 99% of programming with these singular events. It’s addicting and sometimes anger-inducing, but is it representative of what’s really going on in the world?

Today’s infographic comes to us from economist Max Roser of Our World in Data, and it highlights six megatrends that show that in many important ways, our world is improving drastically.

The one commonality of these six indicators? They all happen slowly and incrementally, but are more evident with a long-term perspective.

Each family lifted out of poverty, each classroom that gets built, and each village gaining access to basic vaccinations may not seem significant on a scale of billions of people – but over decades, these gains add up to create a richer, more educated, and healthier world and a very powerful statistical story.

Here are the six big picture trends pointed out by Roser, using data collected over hundreds of years:

The most potent recent example of this is China, where access to free markets have enabled 700 million people to be lifted out of poverty in just over 20 years.

It’s also worth mentioning that statistics for this category are done using inflation-adjusted international dollars, which take into account inflation over time as well as exchange rates. Non-monetary forms of income are also included in the calculations.

In 1820, only a privileged few were able to get basic schooling. Since then, millions of classrooms and schools have been added around the globe, and the numbers are staggering. In relative terms, we’ve gone from 17% of people having a basic education to 86% today.

Here’s a more detailed breakdown of this, also from Our World in Data:

Following a similar trend line as basic education, literacy has risen from 12% to 85% over roughly two hundred years. In absolute terms, these numbers are even more impressive. In the 1820s, there were only about 100 million people that could read that were 15 years or older. Today, the number stands at 4.6 billion.

While the world has been having some short-term setbacks when it comes to freedom and democracy, the overall trend line is still impressive over the long run.

Vaccinations for diseases like whopping cough, tetanus, and diphtheria were unavailable for most of the 200 year chart. However, today around 86% of people globally are vaccinated against these basic and devastating illnesses.

Even as far back as 1920, it used to be that over 30% of infants would die before they hit their 5th birthday.

Since then, developments in housing, sanitation, science, and medicine have made it so that death is a much rarer occurrence for the youngest people in our society. Today, on a global basis, child mortality has been reduced to 4%.