3. The Falling US Dollar Suddenly Became a Problem

4. Conclusions: Where Do We Go From Here??

Last week’s carnage in the US stock markets was one of the worst meltdowns I have witnessed in my 40+ years in the investment business. Most US stock indexes plunged over 10% in value from Friday, February 2 to the lows on Friday, February 9 – complete with two days where the Dow Jones Industrial Average lost over 1,000 points in one session.

While I warned in my Blog on January 11 and my E-Letter on January 16 that US stocks were extremely overvalued, and that the next correction – which could happen at any time – would likely be very serious, even I didn’t foresee daily market plunges of 1,000+ point declines in the Dow.

In my January 16 E-Letter, I reprinted an article from Dan Lyons which pointed out that investor allocations to stocks were the highest since 2000. Mr. Lyons pointed out that much of this money in the stock market came in late in the game, and he predicted the next market correction could be “severe.” I agreed with him.

Having just been through one of the worst weeks in stock market history, I will offer some thoughts today on the convergence of factors that led to the latest stock market implosion. Let me admit upfront that I don’t know if the downturn is over, no one does, but hopefully the analysis below will help you understand what has just happened.

The Worst Week For US Stock Markets Since 2008

Last week was a stunner for most investors. The plunge actually began on Friday, February 2 when the Dow shed 666 points on the day. The Dow proceeded to fall a record 1175 points on Monday. That put the DJIA down from above 26,000 on February 1 to 24,346 at Monday’s close.

The Dow rallied on Tuesday of last week by 567 points, only to fall on Wednesday and plunge another 1,033 points by the close on Thursday. The market was sharply lower again on Friday in early trading but managed to close up just over 300 points by the end of the day.

Here’s my take on how a number of factors finally came together to turn the stock markets on their ear. Several of these factors are not new and I have mentioned them before. But they, and a couple of new ones, seemed to converge in February to spark the sharp selloff.

I’ll start with what I believe was the first factor. At the beginning of this month, the Atlanta Fed announced that its “GDPNow” indicator was predicting economic growth of over 5.3% (annual rate) for the 1Q versus only 2.6% in the 4Q. That would be stunning, if only it were true. 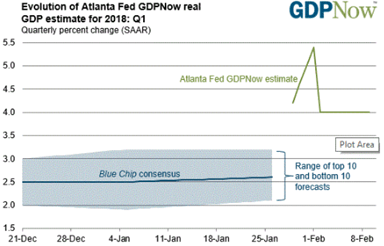 The more I watch the Atlanta Fed’s GDPNow forecast, the more unreliable I find it. The reading tends to be extremely strong early in most months, only to be whittled down significantly as the month plays out. As you can see above, the Atlanta Fed has already shaved that 5.3% reading down to 4%.

For reasons unknown to me, market analysts seemed overly concerned with the Atlanta Fed’s suggestion that the economy could surge by over 5% this quarter. This, they concluded, would result in considerably higher inflation this year than had been forecasted.

This, in turn, would lead to more Fed rate hikes than had been expected this year. If that were to be the case, the economic recovery could stall in the second half of this year. The bad news, even though much of it was not new, was piling up. Last Friday’s stronger than expected jobs and wages report also fanned fears of inflation.

The Falling US Dollar Suddenly Became a Problem

The value of the US dollar has been falling for over a year now. The dollar is down over 12% since President Trump took office. On the campaign trail in 2016, candidate Trump hinted a few times that he wouldn’t mind if the dollar went lower.

A lower dollar makes our exports cheaper to foreign buyers, while it makes imports more expensive. That combination can increase exports and reduce imports, which can make our trade deficit smaller. Sounds like a good thing, right?

The debate over the value of the US dollar leaped into the national spotlight in recent weeks following some (ill-advised, in my opinion) comments by President Trump’s Treasury Secretary Steven Mnuchin in late January.

Speaking at the World Economic Forum in Davos, Switzerland on January 24, Treasury Secretary Mnuchin stated, "Obviously a weaker dollar is good for us as it relates to trade and opportunities."  He went on to say that the dollar’s short-term value is not a concern of ours at all.” The mainstream media pounced on these comments!

The media failed to mention that in the same speech Secretary Mnuchin said the following: "Longer- term, the strength of the dollar is a reflection of the strength of the US economy and the fact that it is and will continue to be the primary currency in terms of the [world’s] reserve currency."

So while the media chose to emphasize Mnuchin’s comments about the dollar’s recent decline as being more or less insignificant in the short-term, there was nothing in his speech to suggest that the Trump administration’s strategy is to weaken the dollar in the long-term.

So, in that context, let’s take a look at what the US dollar has been doing in recent years. In the last half of the 1990s, the US dollar was extremely strong. But in the years after the “dotcom” bubble burst, the dollar peaked and moved sharply lower and didn’t bottom until the financial crisis of 2008 when a lot of international money gravitated to the safety of US dollars.

While the dollar managed to regain some ground in 2015 to late 2016 – nowhere near its 2000-2002 highs – it has been in a prolonged decline since the beginning of last year. Numerous studies over the years have shown that a declining US dollar is not usually bearish for stocks. But in the last couple of weeks, more analysts have decided it is this time around.

The thinking now is that the falling US dollar is another indicator that higher inflation is just around the corner, despite the lack of evidence to that conclusion. All of this adds to the latest narrative that the Fed will have to raise interest rates more than expected this year and next, which could choke off the budding economic recovery.

Conclusions: Where Do We Go From Here?

After plunging by more than 10% from the record high in late January to the intraday low last Thursday, the major stock indexes corrected just over 10%. The Dow rallied over 300 points last Friday and gained another 410 points yesterday. The question, of course, is whether the market can continue higher from here, or will we see more weakness and another lower low before this correction is over? The truth is, no one knows.

Here's a look at the past five market corrections including the current setback. You can see the market point loss and the percent of the decline below for the Dow and S&P 500:

At this point, the current correction is the smallest of the last five in terms of the percentage decline. Yet it has been the fastest by far, and there’s no assurance we’ve seen the last of it.

We do have some important economic reports due out this week that could be key indicators of where the stock market is headed next. Tomorrow morning we get the Consumer Price Index (CPI) report for January. For all of 2017, the CPI rose 2.1%. The pre-report consensus suggests a very small decline in that rate in January. If so, that could relieve some of the concerns about inflation that have been worrying analysts and investors over the last couple of weeks.

I’ll leave it there for today and report back on Thursday in my Blog. You can subscribe to my free weekly Blog here.

The Stock Market Turned Nasty – It Was Long Overdue

Gary's Between the Lines Blog: Another Government Shutdown Looms on January 19