Bronte Capital Callisto Fund commentary for the month of January 2018.

The Bronte Capital Callisto Fund L.P. is a global long/short fund targeting double digit returns over the long term, advised by a performance orientated firm with a process and portfolio that is genuinely different. Objectives include lowering the risk of permanent loss of capital and providing global diversification without the market/drawdown risks typical of long-only funds. A highly diversified short book substantially reduces risk and enables profits to be made in tough markets.

In January the fund, which is only partially long, outperformed a very strong long-only MSCI ACWI global index by 1.6%. 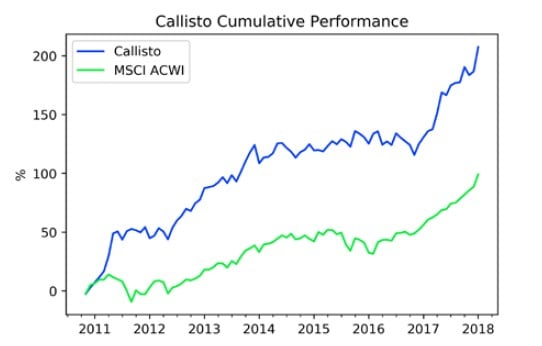 We wrote this letter at the end of January and there has since been a subsequent market correction. A few days makes all the difference. Nonetheless this letter is about January where our focus was managing losses in the short portfolio, whereas shorts are presently proving rather useful.

January was an extremely good month both for markets and the funds. Our longs performed well. Our shorts hurt but not hugely. In combination we managed to roughly keep up with a rip-snorting bull market even though we are running a large short book. Our “alpha” generation was just fine.

The short book was helped by a (large for us) position in a Canadian miner which fell more than 40 percent during the month on surprisingly low grades from their major mine.

Also offsetting the losses in the short book was a hedge we entered. We purchased some out-of-the-money calls on the Russell 2000 index. The Russell is highly correlated to our short-book, so these provided protection against a “melt up” market.

Hedging our short book with options has been cheap. The VIX—a measure of implied volatility embedded in option prices—was low against almost all of financial market history. This allowed us to buy protection against rising markets at low cost, which some of our clients might find to be an unusual preoccupation. This month such protection proved valuable, as the market did go “vertical” this month. Perhaps markets can rise a third of a percent per day for all of 2018. But we doubt it.

This image produced in jest on Twitter summarizes current markets: 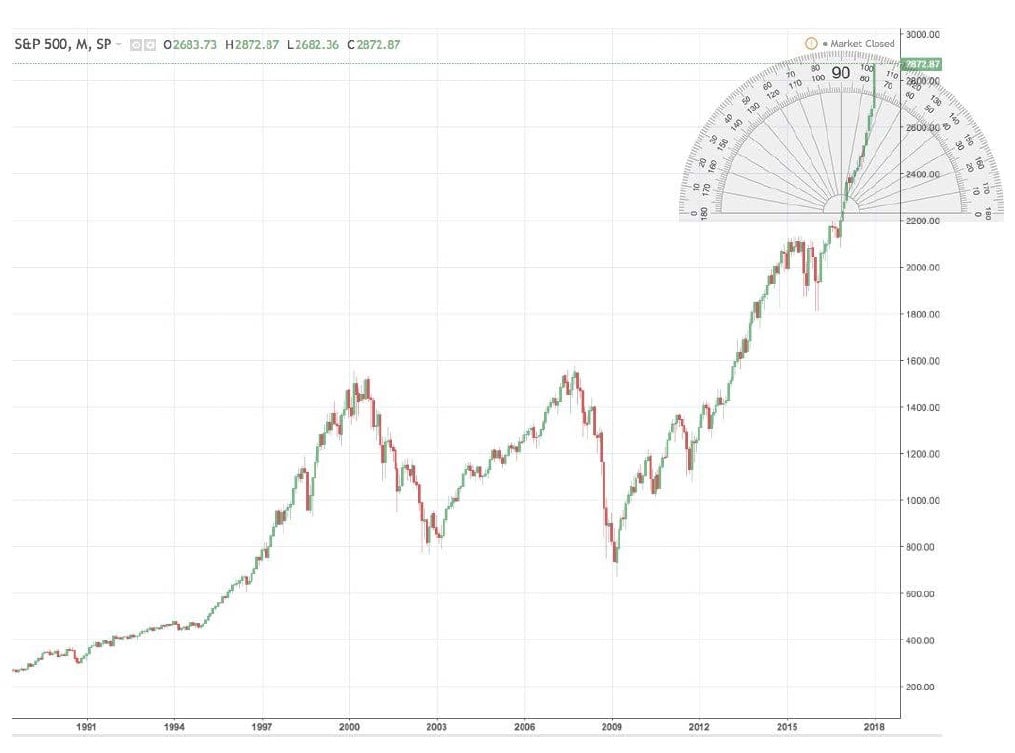 Our longs benefited from a small position in World Acceptance Corp. (NASDAQ:WRLD). World is a deep subprime company offering installment loans in (mostly) the American South. It is competently run and, in our estimation, reports its loan statistics accurately.

At Platinum Asset Management in the early 2000s, John used World as his “benchmark” subprime company. When competitors had trends in loss data that diverged dramatically from World’s, it was likely the alternative company was faking its losses. World was the competent player in a very dirty industry.

World has had regulatory problems with the Consumer Finance Protection Board (CFPB) ever since ProPublica wrote a scathing article about them, entitled: “The 182 Percent Loan: How Installment Lenders Put Borrowers in a World of Hurt.” We think the article overstates the case somewhat, but there is no question that World is a deep subprime lender that charges very high interest rates agreed to by customers as part of “loan restructures”.

The bear case for World was that their regulatory problems would cripple them.

We bought some World Acceptance after President Trump was elected, thinking (correctly, as it turns out) that Trump would make appointments that defanged the CFPB.

In late January, the CFPB dropped the case against World with no action and World released results that showed, absent CFPB interference, how astonishingly profitable the business is. The stock is up over 40 percent in the month.

Moreover, because the global financial crisis wiped out almost all of World’s competition and threats from the CFPB kept that competition from re-emerging, the astonishing profitability should continue for some time. Also, during the period of CFPB investigation, World was constrained from borrowing large amounts of money and hence repurchasing their stock. We expect repurchases to resume.

Whilst the position is outside our usual criteria – it is within our expertise. We are going to let this position run a little.

Our shorts did cost us during the month however, which means they have grown bigger. Fortunately, our longs have grown bigger faster. If we did nothing, our portfolio would become “longer”.

This means that we need to add to our short position. We have been doing so – but it is almost a full-time job just to find enough shorts to keep up with the market-driven imbalances in our portfolio.

This is a problem that we have had for the past year. Our shorts cost us a little last year as well, but our longs went up much more than our shorts and the portfolio—again, had we done nothing—would be getting progressively longer.

Our work program for shorts remains unchanged: find more shorts that don’t cost us too much as the market continues to add a third of a percent per day!

Sharp-eyed readers will notice some differences from our previous letter. Firstly, we have now corrected the December return where we had used the gross return rather than the net return in our letter and calculations. As a result, the annual return for 2017 in the table on the front page of this letter is now shown as 27.4% (down from 27.7%). We also said in this letter that shorts cost us money last year. Our December letter said the opposite. Alas the number in the December letter was wrong as to the break-up of our returns.

We lost a mid-single digit amount on our shorts during 2017, mostly in the last few months. This was still a nice outperformance against the market, and our shorts added considerable “alpha”. But we were less good at shorting in 2017 than we stated. Conversely, we were better at going long than we implied. The break-down in performance between longs and shorts is calculated internally, and to our dismay it was wrong. The error was found fairly fast—but we regret having made it. We should and will do better.

Still – notwithstanding that error – if our shorts only cost us a mid-single-digit percentage in a melt-up market like 2017 we will take it.