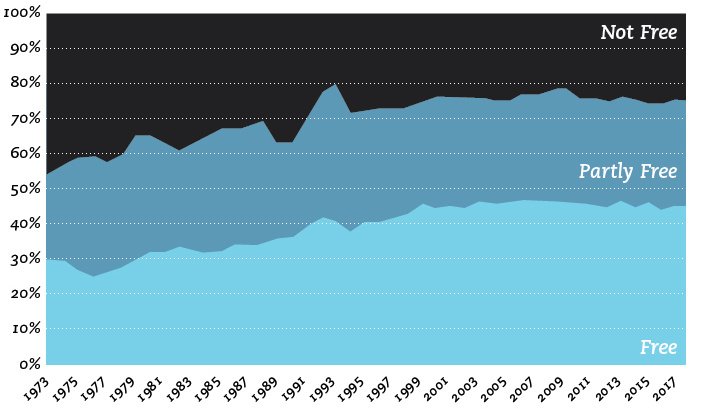 Like many other things in this world, the amount of freedom that people have ebbs and flows with time.

In general, it can be argued that political and economic freedoms have been increasing steadily since The Enlightenment – but of course, there are always shorter corrections along the way where freedom seems to spiral downwards in the interim.

Right now, we’re in one of those ruts, and global freedom has consecutively declined for a 12 year period.

Freedom in the World, a report published every year since 1973, attempts to measure civil liberties and political rights around the world. It’s put together by Freedom House, a non-governmental organization based in the United States.

According to their index, here is the share of “free” countries globally between 1973-2018:

This year’s report for 2018 is entitled “Democracy in Crisis”, and it sounds the alarm on eroding freedom throughout the world.

While the number of “free” countries is holding fairly steady at close to 45%, there is a clear downtrend with the scores of the countries themselves.

In 2017, for example, there were 71 countries that had net declines in score, while only 35 had net increases. This makes for a differential of -36, which is the widest gap during the 12 year downtrend.

Why do scores continue to decline?

Here are some of the specific examples, cited by the report:

For much more in-depth reading, here is a link to the full report PDF.