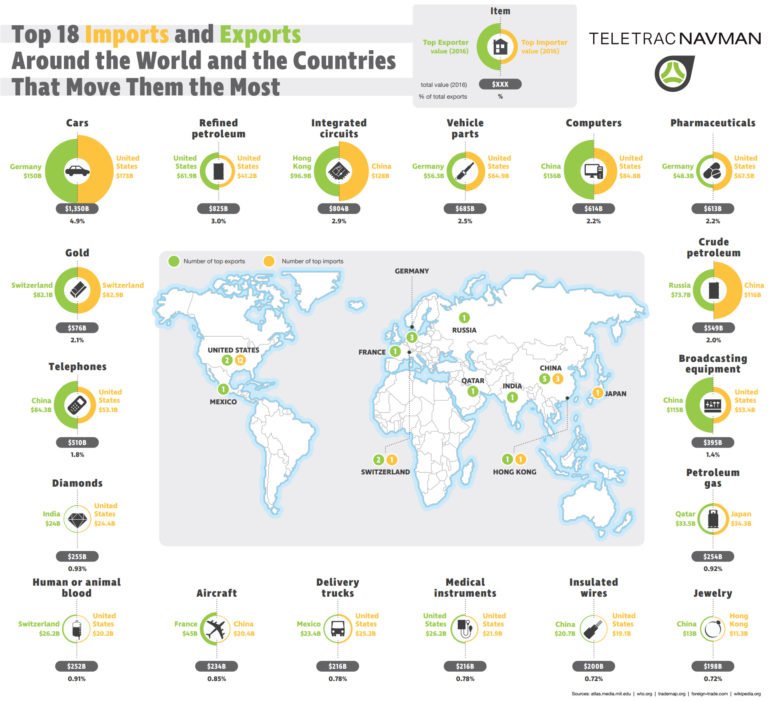 Every day, massive quantities of goods get traded on the global market.

These goods can be entirely customized and unique, but more often they are things like commodities or bulk goods that get moved around on huge container ships from country to country. Included in this latter category would be common exports like crude oil, automobiles, iron ore, pharmaceuticals, and smartphones.

Which goods get traded the most, and what countries play the most important roles in these deals?

The Most Traded Goods

Today’s infographic comes to us from Teletrac Navman and it covers the world’s 18 most traded goods, as well as the top importer and exporter for each good.

Here are the good categories, along with the total dollar value and percentage of total exports that each category represents on the global market.

Finished automobiles are the top good traded worldwide with $1.35 trillion being traded each year between countries. Auto parts are not far behind in the #4 spot with $685 billion of trade.

Oil also stands out as a key commodity: refined petroleum ranks #2 with $825 billion of trade, while crude petroleum and petroleum gas are at #8 and #12, for $549 billion and $254 billion traded, respectively.

Finally, an odd standout is the category of human and animal blood – which apparently sees $252 billion in aggregate international trade each year.

In case you were wondering, here are the top exporters of human and animal blood:

The United States is the biggest importer for 12 of the 18 trade categories, including the largest ones: automobiles and refined petroleum.

Interestingly, the U.S. is also the largest exporter of two of the goods that it is a top importer of: refined petroleum and medical equipment. This is because both are highly specialized categories – the U.S. may import one grade of refined oil at a low cost, while simultaneously exporting a higher or more specialized grade of oil at a premium.

Germany is a top exporter of autos, vehicle parts, and pharmaceuticals, while Switzerland is the number one importer and exporter of gold.

Lastly, China is the biggest exporter for five of the 18 trade categories: computers, broadcasting equipment, telephones, insulated wires, and jewelry, while being the largest importer of crude oil, integrated circuits, and aircraft.