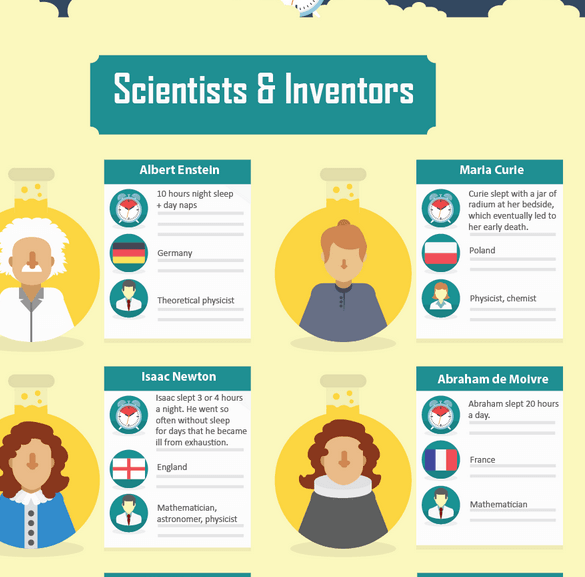 Good sleep is a very important commodity which is treasured and, far too often, quite scarce. If you’re rich, famous and successful, this is even more relevant. Many of the world’s top CEOs stick to strict sleeping regimes and view this as the secret to their success.

When it comes to getting a good undisturbed night’s sleep, some will go to extreme lengths to make sure it goes ahead without a hitch. But for others, sleep is not high on their list of priorities.

Here is the complete collection of weird (and not so weird) sleeping habits of famous people.

Sleeping for only four hours per night, Martha Stewart rises at 6:30 every single morning to ensure that her animals have enough food and water. Looking after her horses, chickens and donkeys before the arrival of her crew meant that she was left with a very short amount of sleep.

Greek-American founder of The Huffington Post – Arianna Huffington – suffered from severe exhaustion once upon a time and awoke one day in a pool of her own blood to find that she had collapsed and injured herself.

This was a wake-up-call (no pun intended) for Huffington who then devised a strict sleep regime which she now follows religiously.

At night, Huffington turns off all of her electronics and places them outside her bedroom. She then runs a hot bath with Epsom salts and lavender oil, before retiring to bed in special sleep clothes and reading until she dozes off.

American business magnate and President of the United States Donald Trump sleeps between three to four hours per night. Some nights, however, he sleeps for as little as 90 minutes.

Trump is wide awake for almost 19 hours a day running the country and managing his business interests.

The well-known Italian painter, investor and sculptor Leonardo Da Vinci strictly followed a polyphasic sleep routine where he slept between 20 minutes and 2 hours per session, multiple times per day.

This unconventional sleep schedule definitely gave him more time to dedicate to his works throughout the day, but it did make it harder for him to focus on long-term projects which required a higher level of concentration.

Like Leonardo Da Vinci, Thomas Edison thought that sleep was a waste of time. Sleeping for three hours per night, he felt this provided him with the right amount of energy needed to dedicate towards his inventions.

He would often take power naps, though, and would sometimes work for over 72 hours non-stop. It’s safe to say his sleeping habits were all over the place. This odd and somewhat dangerous sleeping schedule clearly worked though, as he invented the light bulb and produced over 1,000 patents!

One of today’s most recognisable names, Elon Musk is the man behind SpaceX, Tesla and has previously worked on PayPal.

The South-African born Canadian-American business magnate, inventor and engineer values sleep somewhat, sleeping every night for six hours between 1am and 7am. Interestingly, Musk has been known to sleep in the Tesla factory, keeping a sleeping bag in a conference room close to the Tesla production line.

The Serbian-American inventor suffered from severe nightmares as a child, which perhaps influenced his odd sleeping habit.

Tesla followed an ‘Uberman’ sleeping cycle where he never slept for more than two hours per day. It is rumoured that Tesla once worked for almost 84 hours without any sleep whatsoever.

The former American professional basketball player suffers from sleep aponia, a scary condition which means that periodically, throughout the night whilst sleeping, he stops breathing for a short period of time.

In serious lapses of sleep aponia, he can stop breathing for up to ten seconds and can occur several times per night. Although it is not known how long he sleeps for, these bouts of sleep apnoea probably don’t help him to sleep easy or for very long.

Tom Cruise has such a bad snoring problem that he sleeps in what he refers to as a “sound-proof snoratorium” which completely locks in sound.

When he goes to sleep, he shuts himself inside the snoratorium. It’s a very small, dark room which, when the door is shut, prevents all sound from leaking outside it. Tom Cruise reportedly sleeps in this room when guests stay over, so that he does not disturb them with his loud snoring.

All of Stephen King’s pillows are pointed in a specific direction; the open side of the pillowcase points toward the other side of his bed.

Stephen King’s bizzare sleeping habit doesn’t just stop there, though. Before retiring for the night, King brushes his teeth (like we all do) but then washes his hands for some reason.

Why not check out our infographic below? You might be quite surprised at some of the odd sleeping habits which feature on our list!