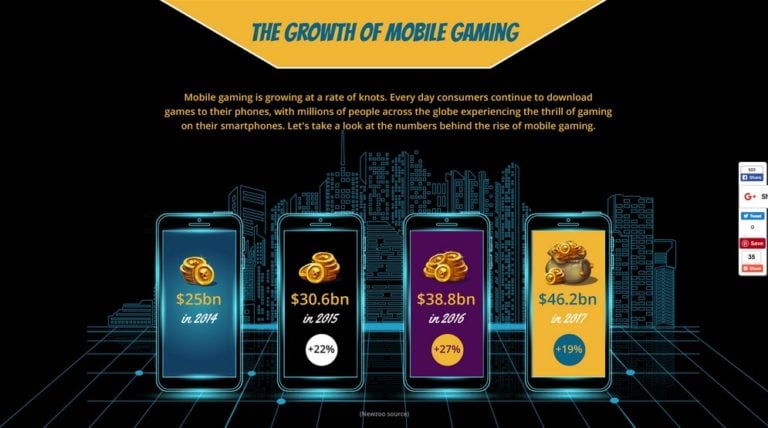 Mobile gaming has long been a staple of the market, overtaking PC gaming in revenue between 2014 and 2015 and growing ever since. But, you may not have been aware of just how staggering the statistics truly are – Mr. Gamez’s latest infographic lays them out in detail, showcasing just how important mobile gaming has become as an undeniable market frontrunner.

With a growth in revenue from $25 billion to $46.2 billion between 2014 and 2017, its rise to the top is unprecedented – and it’s showing no signs of slowing just yet. The number of users has grown faster than other platforms too, with nearly 200m using their mobiles for gaming in 2017. That’s up from 150m in 2014, and a much faster rise than its PC, tablet and console counterparts.

The aforementioned growth in revenue has been a lot faster than other platforms also, as showcased by the infographic. It makes sense, as front-running mobile phones become powerful much quicker than consoles and PCs (which do not have much room for improvement as it is), what with shorter gaps between new iterations, whereas consoles see new hardware every few years.

But there seems to be much more support upon mobile, with plenty more titles available – again, an unsurprising statistic considering how many mobile gamers are casual, whereas console and PC gamers are considerably dedicated. However, the number is somewhat staggering, with 152,180 new titles launched on mobile app stores in 2017 alone. That’s a much bigger number than PC or consoles, which saw 3400 and 520 new titles released respectively.

So, where is mobile gaming most popular? In East Asia, with Korea, Japan and China boasting the most users – 224 million, to be exact. The majority of these users fall between the ages of 20 to 35, with smaller denominations between 10 and 20, and 35 to 50. 84% of these users use their smartphones, with a further 41% using their tablets alongside or alternatively.

North America is actually home to a much smaller number of mobile users, with 146 million residents playing some portable titles. There’s much more diversity in terms of ages, though, with an equal distribution between the ages of 10-50, but a considerable number of over-50s playing also.

And, it may not come as a surprise, but there are a few titles that have skyrocketed above the rest to become the pinnacles of mobile gaming, with Clash of Clans and Candy Crush being just a couple of the biggest titles – the latter’s daily revenue reaching a huge average of over $1.6 million.

So, what lies ahead for mobile gaming? Continued growth is seemingly a given, but with developers honing in on the social aspect of their titles alongside the stratospheric rise of virtual reality adding a whole new realm of excitement to the market, the sky is the limit.

Mr. Gamez's infographic has even more information to discover about the rise of mobile gaming – be sure to read it and have your mind blown.