ValueWalk
Home Info-Graphs All Low Volatility Trades To Blow Up? 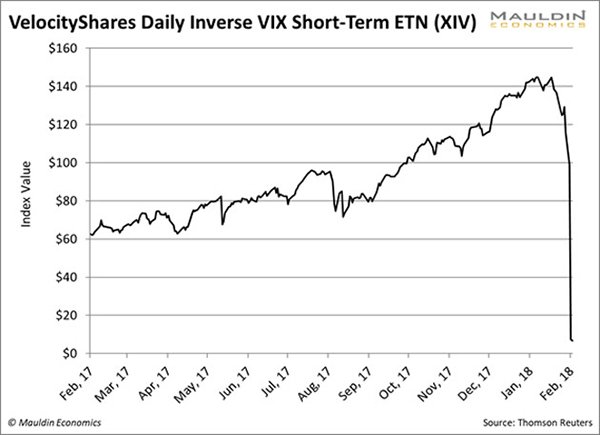 Six percent intraday is close to crash territory, especially when you’ve seen no volatility over the last two years.

We discussed the probability of this happening in a previous issue of The 10th Man, which was all about the short volatility trade.

We even discussed it years ago in a piece about covert gamma, which is the idea that the market is very asymmetric to the downside.

All of these things came to pass. Now, let me explain the importance of what just happened.

Short volatility, as a strategy, has been discredited.

In the past, people had come to expect less and less volatility. They will now expect more and more.

I’m talking about implicit vol strategies as well—any strategy in the financial markets which is dependent on low volatility will blow up.

It is the path that is uncertain. Will they all blow up this week? Probably not.

The volatility bell has been rung, and you can’t unring it.

For those who might not fully understand what just happened (including Carl Icahn), let me walk you through it.

Lots of people were short volatility.

As you know, they were short volatility through inverse VIX exchange traded products (ETPs) like XIV and SVXY. But the “short vol trade” was much bigger than that. But let’s focus on the VIX ETPs for a moment.

XIV was essentially just short VIX futures; this isn’t hard to figure out. If you’re short something and it doubles, you lose 100%. XIV was short VIX futures and they nearly doubled, and it lost nearly 100%.

The prospectus says if that if the fund loses a certain amount (80%, I believe) it would shut down and return capital to investors. XIV will be gone in about a week or so.

Once it became clear in the afterhours that the fund was nearly kaput, the piranhas jumped in.

My concern months ago was that the vol market could break under the strain of the leveraged VIX products. When the VIX moves, the VIX ETPs rebalance, and the more it moves, the more they had to rebalance.

I heard that there were 280,000 VIX futures to buy on the close on Monday, but you know what? The market was able to absorb it. It’s amazing how hard it is to break a market.

Now, a lot of people are going around blaming the VIX ETPs for being some kind of high-stakes casino, and saying we should ban these products.

Slow down there, Turbo.

XIV did exactly what it was supposed to do—make money for six years and give it all back in one day. That’s short vol.

What If Stocks Give It Back in One Day?

If the entire market is dependent on low volatility, what is the likelihood that stocks have made money for six years and will give it all back in one day?

Over the last few days, there has been a lot of vol selling going on. People are trying hard to unring the bell.

But you can’t. Volatility is back, and there’s nothing you can do about it.