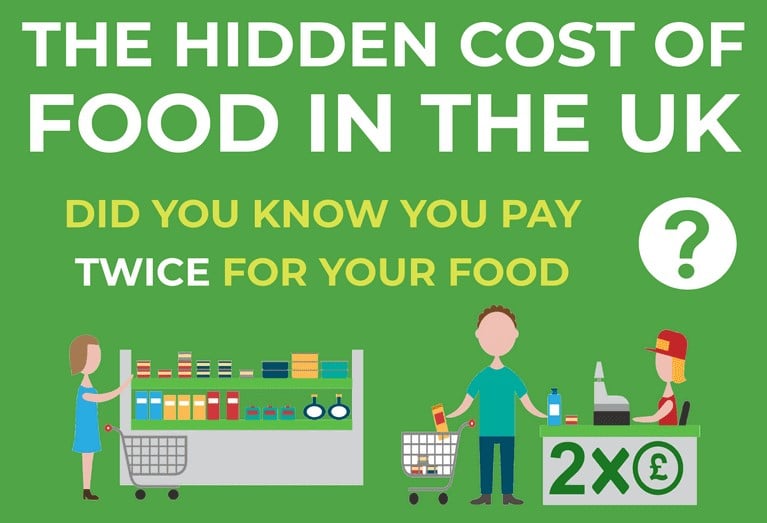 UK consumers might think they pay less for their food than ever before but nothing could be further than the truth. The reality is that every time UK consumers spend £1 on food and non-alcoholic drinks, they incur additional expenses of £1 known as hidden costs. The report The Hidden Cost of UK Food by the Sustainable Food Trust shines a light on the UK unsustainable food manufacturing sector and the hidden costs generated by it.

UK consumers have the right to know what the true cost of their food is and therefore, Greenmatch created the infographic The Hidden Cost of Food in the UK, which raises awareness about the shady economy of the UK food sector and the externality costs it causes.

What Are Hidden Costs?

Hidden costs represent expenses that are not included in the purchases food and non-alcoholic drinks but are caused by food and drinks producers in the UK. These costs are paid for by the society in many different ways.

The UK food system has numerous costs on human health as well as on the environment. Soil degradation, biodiversity loss, water pollution, climate change and unhealthy diets are the most notable externality costs caused by the UK food sector making up £105 of the £120 billion incurred by UK consumers in the form of food-related hidden costs. The remaining £15 billion are caused by farm support payments, regulations and imported food.

How Do You Pay for Hidden Costs?

Hidden costs are paid for by UK consumers in the form of environmental taxes, water taxes, private health insurances and lost income due to sickness caused by food. Furthermore, hidden costs will be passed on to future generations to mitigate the long-term environmental damages.

Environmentally damaging production methods in the UK food system and unhealthy diets do not only generate additional hidden costs for UK consumer but also jeopardize the natural environment and the society. Furthermore, future generations will have to bear the consequences of unsustainable food production.

The lack of knowledge about the hidden cost of food in the UK enables the continuation of harmful food manufacturing methods and keeps the selling price lower than it should normally be in case of proper farming. It also makes it difficult for sustainable food producers to sell their products that are higher-priced.

How Can I Get Involved?

Consumers can join the battle against the UK food system and the hidden costs created by it.

To do so, you need to request a high level of transparency from food producers when it comes to the true cost of your food. You should only buy food from manufacturers that use environmentally friendly production methods and source the food sustainably.

Moreover, you should support organizations and initiatives that aim to improve the UK food system and thus, protect the natural environment and human health.

It is of utmost importance that you adopt a healthy and nutritious diet that is also sustainable.

For the ones that are always up for a challenge, growing your own food and gaining experience on a farm might be a great initiative.

Together we can make a change and steer the UK food system toward a better, more sustainable future.