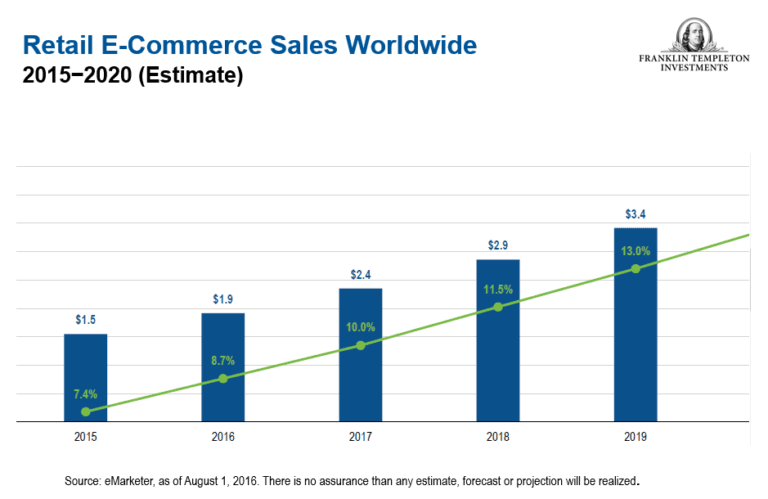 The first month of 2018 saw a strong start for emerging-market equities overall amid a generally solid fundamental backdrop. Stephen Dover, Franklin Templeton’s head of equities, and Chetan Sehgal, director of portfolio management with Templeton Emerging Markets Group, present an overview of emerging-market developments in January, including some events, milestones and data points to offer perspective.

We expect the global economic environment to remain favorable, driven by pro-business policies, increased investment, high liquidity and emerging-market (EM) growth. The International Monetary Fund raised its global gross domestic product (GDP) growth forecasts for 2018 and 2019 from 3.7% to 3.9%, in part due to improving growth in the US economy and continued solid expansion in China.1 Earnings growth, fund inflows and a rebound in commodity prices also bode well for some emerging markets.

Key areas of risk include uncertainty about the US administration’s policies, as well as the ability of China to continue its growth while making structural adjustments. US monetary policy shifts also remain a source of apprehension for many market participants. There may be volatility ahead, but many emerging markets have stronger reserve positions and lower external debt today than historically, which makes them less vulnerable to external shocks. Moreover, emerging countries each have their own idiosyncratic domestic drivers and hence are less correlated to one another and the global market as a whole.

Looking ahead, our core themes of IT and consumerism remain, and we continue to identify opportunities within these areas. We believe that we are still in the early innings of the emerging-market earnings growth upturn, and that valuations and sentiment continue to be conducive to further gains in emerging markets.

Global equity markets remained on an upward trend in January, despite some volatility late in the month. Investor sentiment for most of the month was positive, amid continued signs of global economic growth and strong corporate earnings. Emerging-market equities enjoyed a strong start to the year as they gained pace in January and outperformed developed-market stocks. The MSCI Emerging Markets Index returned 8.3%, compared with a 5.3% gain in the MSCI World Index, both in US dollars.2 Strong fund inflows, stronger emerging-market currencies and higher commodity prices continued to drive returns in emerging-market equities.

The Most Important Moves in Emerging Markets in January

Asian equities rose in January but trailed emerging markets as a whole. Thailand, China and Pakistan were among the top performers in the region. In Thailand, the finance ministry raised its 2018 economic growth forecast on the back of a brighter outlook for exports. China gained as its economy grew faster than expected in the fourth quarter and expanded 6.9% in 2017, marking its first annual acceleration in seven years. Indonesia, India and South Korea, however, lagged their peers, while the Philippines finished lower largely due to depreciation in the peso against the US dollar.

In Europe, the Russian market, largely driven by higher oil prices and a strong ruble, led EM performances in Europe. The Greek market also rallied as the parliament approved a package of fiscal, labor and energy reforms, ahead of Greece’s final review under the current bailout program. Turkey, despite recording positive returns, lagged its EM peers in January.

In Africa, despite the continuation of equity inflows following the victory of a more market-friendly candidate as leader of the ruling African National Congress, South Africa was among the weakest EM markets in January. Equity prices in Egypt bucked the trend, recording a decline amid mixed economic news—officials raised their GDP growth forecast for the current fiscal year but also flagged a potential widening of the budget deficit.

Frontier markets underperformed their EM counterparts over the month. Returns within the frontier-market spectrum varied, with Romania, Nigeria, Kazakhstan and Vietnam notable performers, ending January with double-digit gains. Foreign and domestic investor interest continued to support the Vietnamese market, which reached a record high during the month. In contrast, equities in Argentina were pressured by increased inflationary pressures and a depreciation of the local currency.

The comments, opinions and analyses expressed herein are solely the views of the author(s), are for informational purposes only and should not be considered individual investment advice or recommendations to invest in any security or to adopt any investment strategy. Because market and economic conditions are subject to rapid change, comments, opinions and analyses are rendered as of the date of the posting and may change without notice. The material is not intended as a complete analysis of every material fact regarding any country, region, market, industry, investment or strategy.