Fed 101 – AK covers the basics of how the Federal Reserve operates from its dual mandate to its three policy tools.

Another Lesson In Position Sizing From The Volpocalypse Of 2018 – Tyler talks about the dangers of excessive leverage.

The Difference Between Good Traders And Great Traders: The Art of Totis Porcis – Alex talks about what makes the Trading Greats… well, great. Hint: it’s all about learning to go for the whole hog.

Graham Duncan, cofounder of East Rock Capital, wrote a great piece this week titled “The Playing Field”. He talks about the differences in skill levels between investors and what traits are distinct amongst those who play the game at a higher levels. And he has some credible insights as he’s interviewed or directly assessed over 5,000 investment managers.

For example, managers like David Tepper occupy the 4th level of play, what Graham calls the master level. These investors are uniquely open-minded, as Graham notes the following:

When we interact with a Level 4 investor, the dialogue is different from the traditional “pitch” or “update” we get from others. Harvard professor Bob Kegan has the best description of the mindset:

I see this “open-minded with a point of view” mindset reflected in the way someone grips his or her investment ideas or strategies. Lower level investors are sometimes surprisingly definitive in the way they describe an investment opportunity; they have a too tight grip.

When my partners and I connected one Level 3 manager who was long a stock to a Level 4 manager who was short it, the Level 3 manager viewed the conversation primarily as an occasion to convert the short seller to his point of view. His evangelical approach to the conversation meant that he failed to elicit a number of important data points from the short-seller. Even worse, he failed to take the opportunity to learn subtle elements of the other manager’s research process that might be useful in his own short oriented research in the future.

They also show distinct relationships to things like time and risk that lower level managers don’t seem to possess. Anyways, it’s a really interesting read and worth checking out. Here’s the link.

For you Kahneman fans, Mckinsey shared a great interview with him and Gary Klein. Here’s the link.

They discuss things like decision making, benefits and pitfalls of checklists, and how to more efficiently run meetings. They both talk about the benefits of doing a “premortem” before making important strategic decisions. Here’s a section on that conversation.

The Quarterly: A moment ago, Gary, you talked about imagining ways a decision could go sour. That sounds reminiscent of your “premortem” technique. Could you please say a little more about that?

Gary Klein: The premortem technique is a sneaky way to get people to do contrarian, devil’s advocate thinking without encountering resistance. If a project goes poorly, there will be a lessons-learned session that looks at what went wrong and why the project failed—like a medical postmortem. Why don’t we do that up front? Before a project starts, we should say, “We’re looking in a crystal ball, and this project has failed; it’s a fiasco. Now, everybody, take two minutes and write down all the reasons why you think the project failed.” The logic is that instead of showing people that you are smart because you can come up with a good plan, you show you’re smart by thinking of insightful reasons why this project might go south. If you make it part of your corporate culture, then you create an interesting competition: “I want to come up with some possible problem that other people haven’t even thought of.” The whole dynamic changes from trying to avoid anything that might disrupt harmony to trying to surface potential problems.

You think this might be a good practice to do before putting your money at risk? We call it Red Teaming but same concept. It only makes you sharper to continuously and ruthlessly dissect your thinking, assumptions, and alternatives. We did this all the time in the military and I do it for each of my trades.

Also, one of our readers shared these great reports by KKR and Bain on the current trends in demographics and robotics versus the labor force. Both are important long-term trends to keep abreast of.

I made it a point this year to listen to more podcasts. It’s awesome what a rich and invaluable source of insight and learning they’ve become. My stable of regular podcasts I try to listen to is now up to nine different streams and they range from markets and economics to history, science, performance hacking, health and fitness, and philosophy. It’s always tough to just pick one or two to share with you guys — especially this week.

But the one that really blew me away this week was Patrick O’Shag’s (I can never remember how to spell his entire last name) talk with Josh Wolfe, founder of NYC based venture capital firm, Lux Capital. Josh and his firm focus mostly on companies in the niche hard sciences. An area that is overlooked by most VC firms but is really interesting because these are the companies trying to solve real world problems — not working on the next teen sexting app.

Anyways, Josh is a beast and a super sharp dude with wide ranging interests. Take an hour to listen to the interview, you won’t be disappointed. Here’s the link.

This week I’ve been reading The Rational Optimist by Matt Ridley. This is the first of Ridley’s books that I’ve picked up after having numerous people recommend I read his stuff. I’m about halfway through and like the it so far. It’s got the reading trifecta: it’s easy, entertaining, and packed with some interesting ideas.

Like the name implies, the book is about why the future probably won’t be so bad. Ridley looks at how far and fast human civilization has progressed since our ancestors first walked upright. The reason he gives is trade. Not just in physical goods but also in the cross-pollination of ideas which has exponentially advanced human knowledge — something he refers to as our “collective intelligence”.

Oh, and also, for you Sci-fi readers. Go pick up the Red Rising series by Pierce Brown. The first book starts a little slow but finds its legs in the second half and the two follow on books read at a feverish sprint. I devoured this series. Lost sleep over it because I couldn’t put it down. So so good…

This is a great talk by Pat Dorsey of Dorsey Capital Management on Moats, Runways for Reinvestments, and Superior Capital Allocation.

Dorsey has been on O’Shag’s podcast a number of times. Their latest was a close runner up for inclusion in this week’s musings. I’ve long been impressed by Dorsey’s ability to elucidate the different types of moats and the characteristics that make for a long-term compounder.

The lecture is roughly 30 minutes or so and it’s worth every minute. Check it out. Here’s the link to the video and to the slides.

Also, something for you runners.

I’m running my first ultra in July, it’s just a 50k. But I want to sign up for a 100 miler for next year. I’ve done a few 24hr 50m+ obstacle course type runs but never anything close to triple digits. In the past I’ve been able to carry myself on minimal training and a lot of stubborness. But I’m pretty sure I’d just my blow knees straight out their sockets if I tried doing that on a 100 miler.

So if you any of you have some info/tips you can share on how to train and prep for one of these — or a particular race that you like —  please shoot them my way, it’d be much appreciated. 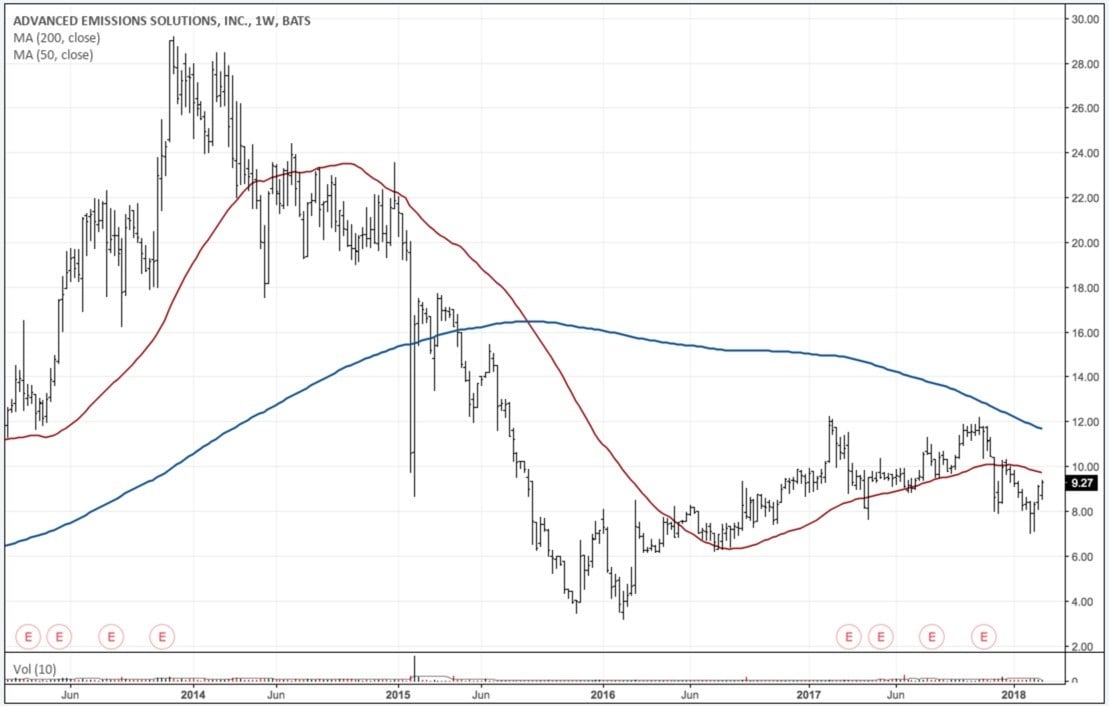 ADES isn’t a typical trade that I’d be interested in. I tend to focus on long runway growth stocks and ADES is a mix of deep value / special situation tax play. But the thesis is so compelling we figured it’s worth digging into (Brandon, one of our analysts, is finishing up a slidedeck on the company which we’ll be sharing with members this weekend).

The pitch is complex and I don’t have enough space in these pages to give it its proper due, so I suggest you go and read the write-ups done by Adestalla and Laughing water (here and here). But the short of it is is that ADES is in the coal and emissions control business, though its real value comes from its tax avoidance vehicle in Tinuum, a joint venture.

Tinuum owns a number of refined coal facilities that reduce the emissions generated by coal fired power plants. Reducing coal emissions happens to generate a large amount of valuable tax credits. And Tinuum contracts with companies that want to lease or purchase these facilities to harvest the tax credits.

Just this Thursday, the company put out a statement regarding the impact of the new tax legislation on their business — they revised their cash flow projections up 20%. The company now expects to produce between $275-$300m of FCF through 2021. The company currently has a market cap of only $192m. I can see why these value fund managers like the stock so much.

All of the information is in the past but all of the value is in the future. ~ Bill Miller

I love this quote. Druck says something similar about how everybody focuses on events and data that have already happened while the key is to focus on the numbers that are 18-24 months out.

There’s layers of time arbitrage in this business. Most people focus on old news, because it’s tangible and concrete. It gives them a sense of certainty and that makes them comfortable — humans hate dealing in uncertainties which is all that the future is. But the key is in developing your sight; your ability to peer out past the known horizon and weight the possibilities.

So going forward, focus on the future. Use the past as just a jumping off point. Markets are future discounting machines. And the present is already in the price.