If you are looking for an emerging markets trade, Goldman Sachs has one idea for you: China.

A recent report from the bank noted that the Chinese equity market remains one of the most attractive in Asia, mainly due to the country’s steady economic growth and position in the region. Over the past 13 months the MSCI China index has delivered and precedently positive returns with no 10% drawdown or more in 288 training days, the longest in history.

From a historical perspective, this really looks healthy Goldman's report notes. 62% of the price returns have been driven by earnings per share growth and growth upgrades. The bank is forecasting 16% earnings per share growth for Chinese companies in 2018 / 2019, led by the financial sector. In comparison, the last Chinese stock rally, which rapidly deflated, was fuelled entirely by a multiple re-rating. This time around P/E expansion has been moderate. In 2015, the P/E of large-cap tech stocks surged to 16x, now it is only 11x, for example.

Compared to other equity markets, both developed and emerging; China also looks cheap on average. Median stock valuations are the lowest monkey developed and emerging benchmarks, which, Goldman opines "means that China is still being priced at discounts to major equity blocs, despite commanding significant ‘China premiums’ during 2007 when investors’ optimism about China was arguably highest." 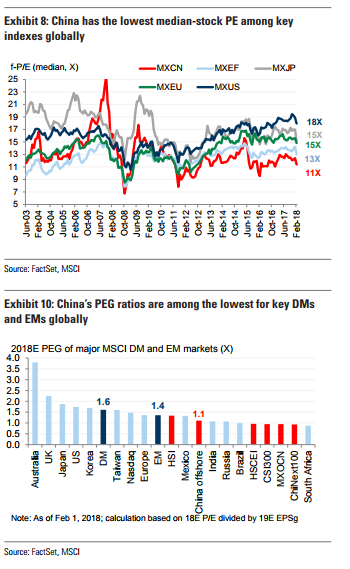 China is cheap, and the region still has a long way to go before it can be considered to be a developed market, so investors should be able to piggyback on growth for many years to come. With equities looking cheap compared to the rest of the world on a peer comparison and growth basis, Goldman likes 'late-cycle' ideas to engage in what it views as a "bull-market correction."

The sectors the investment bank highlights are late-stage cyclical stocks such as capital goods, transportation, and tech hardware, which have tended to outperform in more mature stages of bull markets. Financials, which as noted above, are registering strong earnings growth and have tended to perform well in the late stages of previous bull markets (there is also evidence to show that this sector performs well when the economic cycle starts to moderate according to Goldman's data). And finally, the bank likes 'laggards,' or bottom-quartile performance over the past three months. This strategy has historically generated 22 percentage points of Alpha vs. winners 12 months before market peaks.