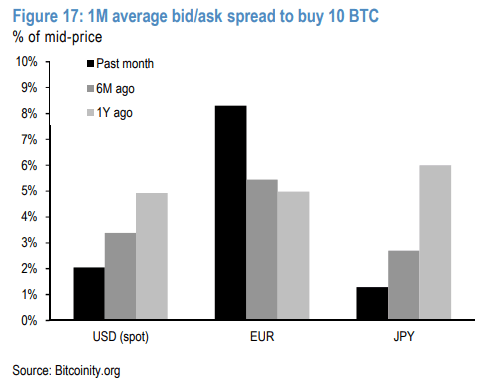 The value of the bitcoin market has increased substantially over the past few years to become one of the most substantial assets classes in the world. The market capitalization of cryptocurrencies is currently around $400 billion or around one-quarter of the amount of gold held as a store of wealth around the world according to analysis from JP Morgan.

However, while bitcoin might be a widely held asset, the question remains: Who uses cryptocurrencies and what for?

This question is the topic of a recent piece of research from investment bank JP Morgan.

The report notes, that while bitcoin does have ambitions to be one of the world’s most significant currencies, today most of the holders are small individual investors, and the bulk of bitcoins are owned by just a few market participants. Research by the bank’s analysts shows that the number of bitcoin accounts with a holding balance of more than one bitcoin is only 2.5% of the total number of account address is available, although these accounts control more than 95% of the bitcoin in circulation.

Several surveys have suggested that rather than buying bitcoin to complete transactions, many owners have acquired the cryptocurrency for nothing more than a speculative bet. A survey by LendEDU suggested just over “half of respondents invested in bitcoin as a store of value or speculative purposes, around 40% because they believed it was a world-changing technology, and less than 10% planned on using it for transactions or to make purchases.”

Moreover, transactions sizes remain modest having peaked at just over $5,000 in mid-December from around $500 on average before the second half of 2017. The average transaction size has since fallen back to around $1,000 after its December spike according to data compiled by JP Morgan and Bitinfocharts.

One of the most prominent headwinds that seem to be preventing bitcoin from becoming a widely used currency is the frictional transaction costs involved. JP Morgan’s analysts highlight the fact that the bid/ask spread for bitcoin traded in euros has been higher than 8% over the past month. While it is much lower in other markets, it is still a little more than 1% for bitcoin traded in JPY, which is substantially more than the spread quoted on more traditional currencies.

Still, these high costs have not put off all customers. Data from coinmap.org and usebitcoins.info show an estimated 11,700 venues accept cryptocurrencies around the world.

It is commonly believed that due to the anonymity provided by bitcoin and other cryptocurrencies, use has been biased towards ‘dark markets’ or illegal activities. However, there are signs that the volume of these transactions has declined significantly over the past few years as regulators of starts to crack down. After all, bitcoin is not entirely anonymous as transaction details are displayed on a public ledger.

“For example, the cofounder Blockchain Intelligence Group provided estimates to CNBC suggesting that the share of illicit transactions have declined significantly in 2017, down from a 20% share in 2016 and from around 50% in earlier years. Similarly, a recent academic paper argued that around half of bitcoin transactions over time have been associated with illegal activities, but that this share has declined to around 20% by end 2016/early 2017.”

Overall then, the bitcoin market is slowly maturing, but it is still highly fragmented and spread between lots of investors with a small stake who are mainly betting that the value of the cryptocurrency will appreciate over time. Only a tenth of holders are expecting to use bitcoin for transactions.