A recent patent spotted by LetsGoDigital shows a new Samsung display concept with holes in the display that will be used to house the camera and other sensors.

A Phone Without Bezels

While a patent for a Samsung display concept is anything but an assurance that the technology will actually be included in an upcoming device, it does indicate that there’s enough research and development behind the idea to protect it legally.

With more and more of the high-end flagships – and even some mid-range phones – opting for a near bezel-less display – there’s far less room to include the necessary components like a fingerprint scanner or camera. There have been indications that Samsung is working on an under-display fingerprints scanning technology, so that would solve that issue, but what about the camera? No modern phone can ship without a front camera and expect to succeed, but the inclusion of the lens seems to necessitate at least a bit of a bezel at the top of the phone.

While Apple sort of solved the problem with a “notch” that included all of the relevant equipment while leaving the rest of the phone a seamless display, the move was controversial and many were not a fan of the new design. A recent Samsung display concept, shows the idea of “holes” in the phone, which would presumably hold some of the technology and allow the device to maintain that edge-to-edge aesthetic. 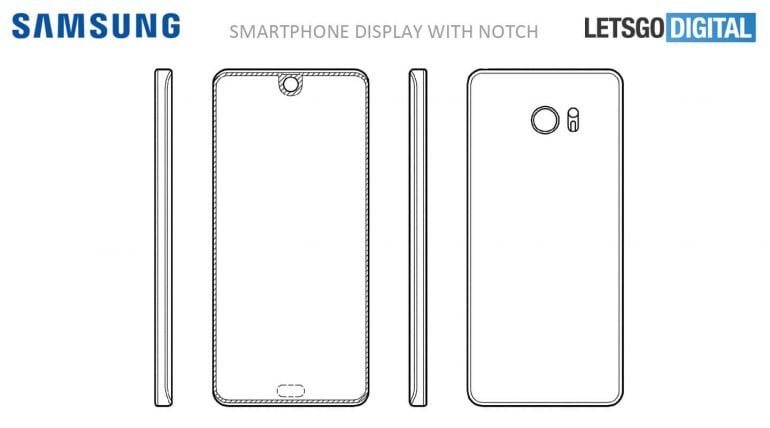 The patent was discovered by technology website LetsGoDigital, and describes a method that would use holes in a flexible OLED screen for the camera, speakers, and other sensors. The patent is specifically focused around how the full area of the screen could be used to display content, which pretty much achieves the goal of edge-to-edge screen – albeit with some minor interruptions by these holes.

The display looks best with images, but some of the diagrams do show text actually wrapping around the phone, indicating that the new Samsung display concept won’t make the phone that much harder to use in practice.

While Apple has opted to use Gesture control in order to ditch the home button, it appears as if the Android home button is here to stay on this Samsung display concept – with another hole cut out, of course.

It remains to be seen whether this unique Samsung display concept will actually make it to market, but it’s an interesting take on a problem that has plagued developers as the market moves more and more towards a phone without any bezels. It’s possible that the holes could be more of an annoyance than a small bezel, but it’s certainly a brand new concept and it will be interesting to see how this Samsung display concept is implemented in its final design.