The pension time bomb is one of the most substantial risks facing policymakers around the world today and nowhere is the crisis more apparent than in California.

California has long promised more than it can afford. The California Public Employees’ Retirement System is chronically underfunded with a deficit of $138 billion listed for the year to June 2016. CalSTRS, the teachers’ retirement plan is $96 billion in deficit.

The rising debts are a result of nothing more than chronic mismanagement. Over the past 17 years, as asset prices have risen, CalPERS debts have ballooned. CalPERS reported a surplus of $33 billion in 1999 and CalSTRS also reported a positive balance.

According to rating agency Moody’s, California’s problem has now become so bad that it’s net pension liability is 117% of revenue, compared to a median of 82% for other US states.

Policymakers are trying to bring obligations under control, but they face a barrier in the form of the “California Rule” a series of decisions by the California Supreme Court that severely restrict the state’s ability to enact pension reform on current employees. Efforts to break down some of this law are underway but a recent appellate court ruling that appears to favor a strict test for pension reforms “is credit negative because it increases the body of case law aligning with California’s historically stringent legal protections” according to Moody’s analyst Tom Aaron.

Not surprisingly, there is talk of the state splitting up or leaving the US. Yesterday, a plan was unveiled for a New California, which would become the 51st state and encompass much of the rich coastal regions along the Pacific ocean. What will come of that is unknown, but it shows a growing anger and worry towards the future of many states with too many promises and not enough money to pay for them.

California isn’t the only state that has to grapple with deteriorating finances thanks to rising obligations (not just limited to pensions). Moody’s publishes a quarterly report that aggregates its long-term obligation ratings (the relative credit risk of fixed-income obligations with an original maturity of one year or more) for 49 states from 1970. 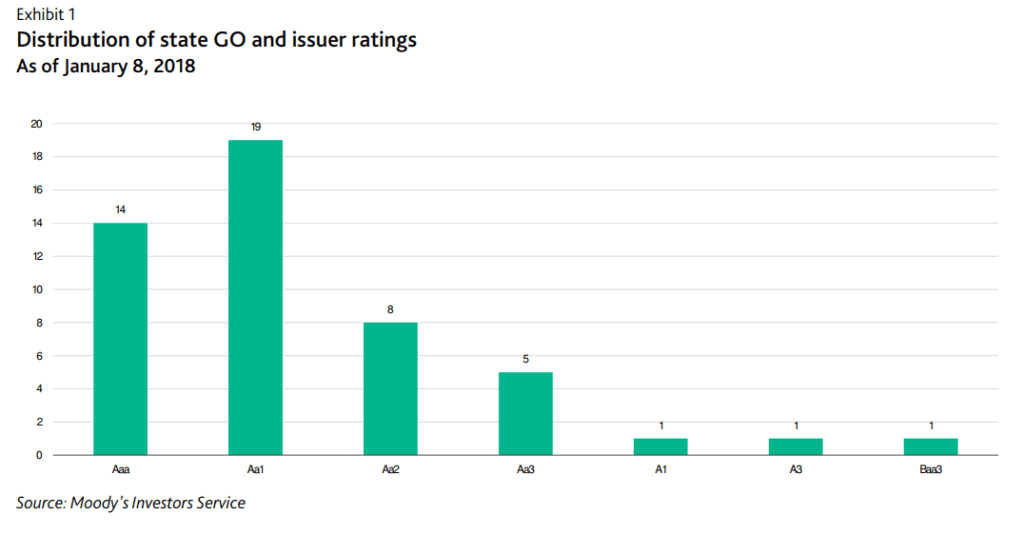 The trend is clear; almost all states have deteriorating finances. Of the 49, only 14 or 29% are rated Aaa (Moody’s highest rating). 19 are rated Aa1, and eight are rated Aaa2. Illions is the only state ranked Baa3, the lowest investment grade rating. Going back to the early/mid-70s, 20 (41%) of the issuers were rated Aaa. As state finances continue to deteriorate, it’s likely this trend will only accelerate. 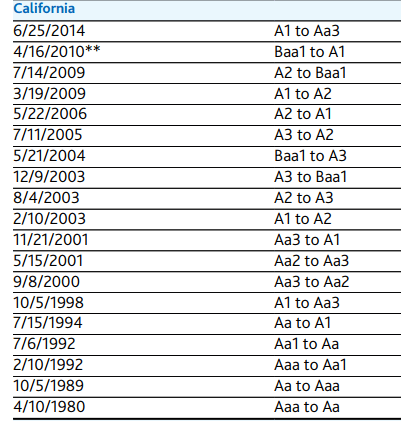