ValueWalk
Home Info-Graphs The Highest Paying Jobs With The Most Growth Potential In 2018 –... 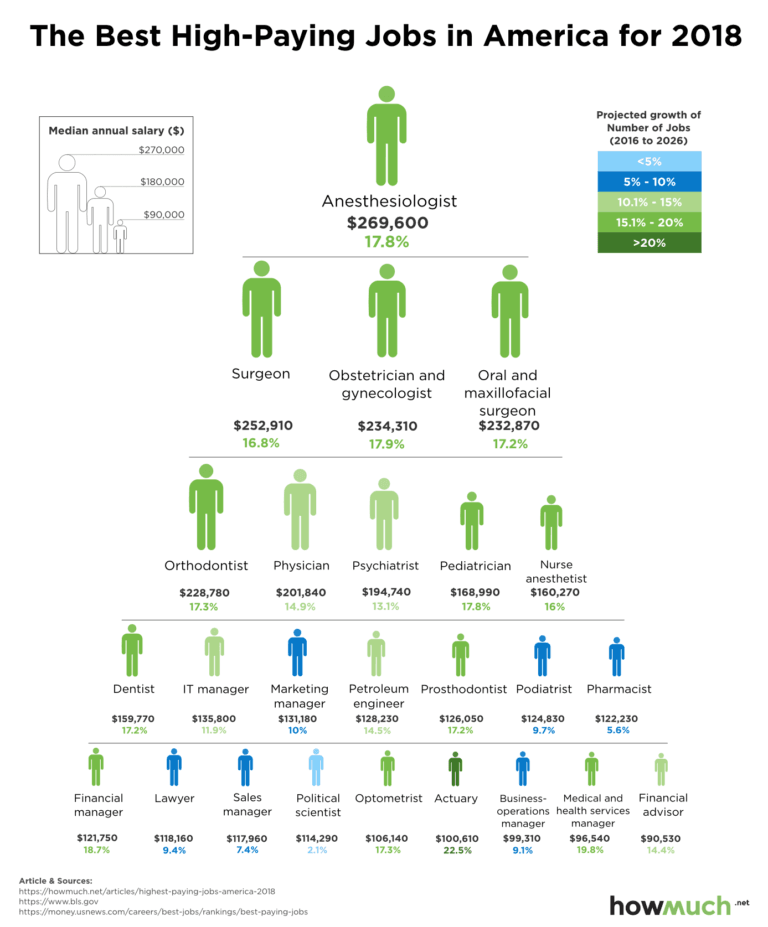 The American economy is finally humming along at a nice clip, and most people are optimistic about the future. Some people are just not starting to see real wage growth, but not everyone. With so much disparity in economic outcomes, it got us thinking about the best jobs in the country.

We gathered information about the best jobs from U.S. News, including the average total compensation for each profession and the projected growth rate over the next decade. U.S News explored a variety of different factors as well, like the stress level and work-life balance associated with each line of work. We wanted to make things simpler. Each figure on our viz represents a profession, the size of which corresponds to the compensation level—the bigger the figure, the more money one can expect to earn. We then color-coded each figure based on future job prospects. Blue figures represent professions with under 10% in total growth, but dark green represents those professions with high growth potential, over 20%. We also arranged the figures in a pyramid, making the winning professions even more obvious. Our viz quickly reveals the best bets for finding a highly paid job in the future.

First off, the majority of the positions on the top half of the pyramid are from the medical profession. Anesthesiologists have the best prospects in terms of overall compensation, netting on average $269,600 each year with a projected growth rate of 17.8% in the available jobs. In fact, every job in the top three levels of the pyramid involve medical school of one kind or another, and they are universally expected to see strong job creation of higher than 10%. In short, going to medical school is still a solid path to earn a good living.

Things get more crowded further down the pyramid. The actuarial sciences are expected to see the strongest overall increase in demand, with 22.5% job growth in the coming years. That suggests actuaries are in for a pay raise as demand for their services outstrips the supply of labor. That being said, actuaries make on average $100,610 per year, not half as much as an anesthesiologist. $100k is nothing to sneeze at, but it’s not the type of work that quickly leads to riches. Political scientists are projected to see the slowest increase in demand, growing only 2.1% in total over the next ten years. Perhaps part of the reason is that political observers have been unable to foresee many of the major political events over the past few years, including President Trump’s election.

Top 10 Highest Paying Jobs with the Most Growth

There are two things to keep in mind about all this data. First, high overall job growth doesn’t matter that much if the profession is small to begin with. For instance, oral and maxillofacial surgeons pull in $232,870 each year, and the profession is expected to grow 17.2% in a decade. But that’s only 1,200 total jobs. Good luck trying to get one! Second, there’s no telling how technology is going to disrupt various industries, including medicine. Do doctors really need so much training when big data can recommend tailored treatment plans specific to each patient’s individual situation? Innovative technologies might render all these projections moot. But that’s the best we can do for now, and for many people, the promise of $250K per year with strong job prospects is more than enough to make medical school an attractive option.