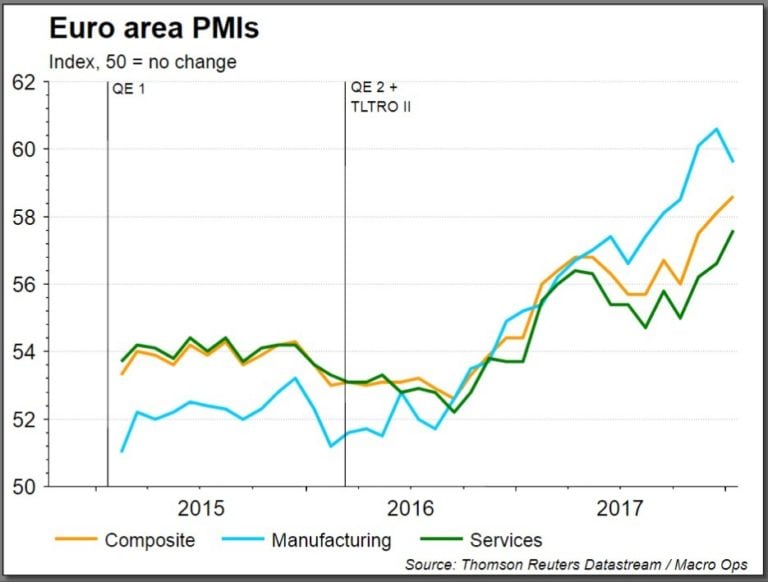 European financials have been one of the most hated areas of the market for years. Investors have been jumping ship and moving capital to a more productive place. It’s just too hard for these banks to make money with interest rates so low.

But the bear thesis dies once interest rates reverse trend. With higher interest rates, banks can lend again for a fat profit. If interest rates in the Eurozone reverse course, we could see a major rally in these beaten down banks.

Right now, there’s a huge disparity between where European interest rates are trading and the improving economic backdrop in the Eurozone.

The German 10yr is currently trading for a measly 50bps. This is over 200bps lower than comparable US rates. While at the sametime, it can be argued that the economy in Europe is just as good, if not better than the US.

The eurozone PMI recently came in at 60.6. This marks the strongest pace of economic expansion since the series began in 1997. And country specific PMI’s printed at all-time highs for Austria, Germany, Ireland, and the Netherlands.

The charts for Barclays (BCS), Credit Suisse (CS), Banco Santander (SAN), and Deutsche (BCS shown on the chart below) all look very constructive.

Barclays reminds me of where Deutsche was in 2016. It was the most hated of the big banks. It was being investigated for a number of misdealings, it’s capital cushion was low, and it had a bunch of bad loans on its book. Everybody was predicting its collapse…

I remember tweeting in September of 16’ that I thought all the bad stuff was already priced into DB and the stock was now a great contrarian long. A number of people replied to let me know how ignorant and wrong I was… The stock put in its bottom that week and is now up 60%.

That’s where Barclays is now. It’s got a whole range of issues. It’s CEO, Jes Staley, is under investigation by UK and US regulators for attempting to unmask a whistleblower. And the bank faces potential heavy fines for possibly illegal fundraising for Qatar and mis-selling mortgage securities in the lead up to the GFC.

It recently completed a costly multi-year restructuring where it’s sold off a number of its operations, including its business in Africa, in order to refocus on its two core markets in the US and UK.

Because of all this, the bank has been one of the worst performers amongst its peers over the last few years. And in addition, it hasn’t helped that Barclays is a UK based bank and UK stocks are, and have been for a while, the most hated assets on the street. Just look at these two charts below from the BofA’s latest Fund Manager Survey.

“The UK remains the consensus short amongst fund managers.”

Here’s the deal, BCS is trading well below its peers on valuation metrics. Selling for just over half of tangible book, it’s cheap.

And what’s great is that there are a number of positive catalysts on the horizon that can flip this negative narrative around and send the stock soaring.

Apparently, Tiger Global, the successful macro hedge fund run by Chase Coleman, also agrees with this thesis. The fund recently made BCS one of its largest positions and now owns roughly 2.5% of the stocks float.

Purchasing some BCS here seems like an incredibly attractive way to play the European recovery narrative.

If you want to stay up to date with our latest European financial research and the specific stocks we’re looking at, then check out our Macro Intelligence Report (MIR) here.